San Francisco – The San Francisco police chief said Tuesday that he respects the news media but a freelance journalist whose home and office were raided by officers had “crossed the line” by joining a conspiracy to steal a confidential report.

Chief William Scott addressed reporters at a news conference, hours after police agreed in court to return property seized from Bryan Carmody in raids aimed at uncovering the source of a leaked police report into the unexpected death of the city’s public defender, Jeff Adachi.

Tensions are high in the case, which has alarmed journalism advocates and put pressure on elected leaders in this politically liberal city to defend the press.

Authorities believe that a police department employee was involved and had contact with Carmody.

“We believe that that contact and that interaction went across the line. It went past just doing your job as a journalist,” Scott said.

Scott said the primary target of the ongoing investigation is the employee, whose identity investigators do not know. He said the secondary focus is on Carmody, who may have been motivated by profit or a desire to tarnish Adachi’s reputation, or both.

Carmody’s attorney, Thomas Burke, declined to comment. Carmody did not respond to an email request for comment. He said on Twitter that he was pleased with the return of his equipment but that he will have to replace numerous cameras, cellphones and computers for security reasons. A GoFundMe campaign has raised nearly $15,000 for him.

His main goal, he said, is to ensure “that nothing seized can be used against myself, North Bay Television News or our sources.”

Media organizations across the country criticized the May 10 raids as a violation of California’s shield law, which specifically protects journalists from search warrants. The Associated Press is among dozens of news organizations siding with Carmody and seeking to submit a friend-of-the-court brief.

The case will soon return to court. Carmody’s attorney and media organizations have asked to unseal warrant materials and revoke the search warrants. San Francisco Superior Court Judge Samuel Feng has not ruled yet on those requests, but he set deadlines for further filings. 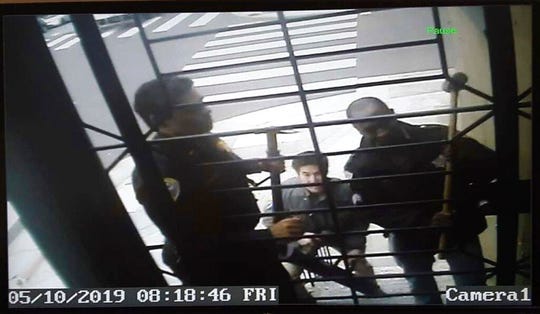 In this May 10, 2019, image from video San Francisco police armed with sledgehammers execute a search warrant at journalist Bryan Carmody's home in San Francisco. The San Francisco reporter is seeking the return of property after police raided his home, as officials sought to determine the source of a leaked police report into the death of the city's public defender. (Photo: Bryan Carmody, AP)

The editorial board of the San Francisco Chronicle has joined with other publications in criticizing city leaders, including Mayor London Breed, for failing to quickly condemn the police actions. A Chronicle report published Monday named supervisors who have not returned messages for comment on the raids.

Police, armed with a sledgehammer, attempted to enter Carmody’s home and then cuffed him for hours.

Breed initially defended the raids but on Sunday posted messages on Twitter saying she was “not okay” with raids on reporters.

District Attorney George Gascon, whose office would normally be responsible for prosecuting Carmody, condemned the police. He said he has not seen the warrants, which are sealed, but he could not imagine a situation where warrants would be appropriate.

“Seizing the entire haystack to find the needle risks violating the confidences Mr. Carmody owes to all his sources, not just the person who leaked the police report,” he said in a Monday tweet.

The police chief acknowledged the uproar, saying that in hindsight the department could have done things differently and will strive to learn from its mistakes. He said police used a sledgehammer and cuffed Carmody because they believed he had guns in the house.

The city attorney’s office did not send an attorney to Tuesday’s hearing, and spokesman John Cote said the office is “not appearing in court on that matter.”

The duties of the city attorney’s office include providing legal services to city agencies such as police, but Cote said the office does not represent the police in proceedings related to search warrants, because police have their own in-house counsel for that.

In court documents, Carmody has said he is a veteran journalist who is often the first on the scene of breaking news. He provides video news packages to outlets in return for payment.

He said a source gave him a preliminary police report on Adachi’s death that contained unsavory details. Carmody went on to sell copies of the report along with video footage from the scene of the death and information obtained from interviews to three news stations.

The leak infuriated city supervisors. They scolded police for anonymously releasing the report to the press, saying it was an attempt to smear the legacy of Adachi, who was an outspoken critic of police. An autopsy blamed Adachi’s Feb. 22 death on a mixture of cocaine and alcohol that compromised an already bad heart.

People who want to crack down on journalists come in all political stripes, said Jim Wheaton, founder of the First Amendment Project, a public interest law firm.

“They went after him because he’s all by himself,” Wheaton said. “And the fact that he sells the materials that he packages. He puts together a journalism report including documents and sells it. That’s what journalism is.”

It was unclear who is paying Carmody’s legal fees. His attorney, Thomas Burke, declined to comment.

San Francisco police have defended the raids, and police attorney Ronnie Wagner said she intends to respond to the requests made by Burke and others. She declined to answer further questions Tuesday as reporters followed her down a courthouse staircase.

The First Amendment Coalition wants the judge to unseal the police department’s applications for two search warrants, which would show whether officers informed judges that Carmody is a journalist.