During her ordeal, Amanda Eller fell off a cliff, fracturing her leg and tearing the meniscus in her knee, a friend told the New York Times 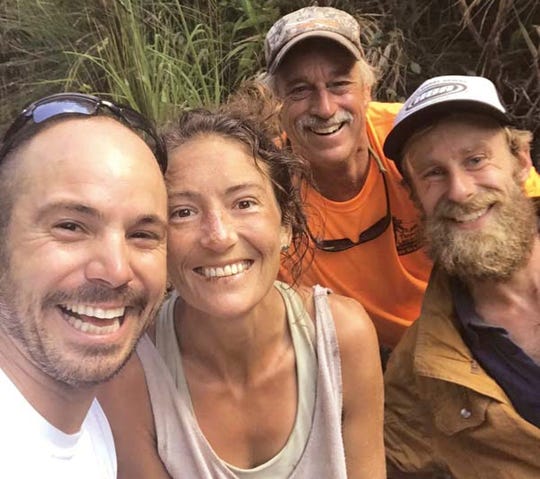 Wailuku, Hawaii – A Hawaii woman who was found alive in a forest on Maui island after going missing more than two weeks ago said she at times struggled not to give up.

Amanda Eller told the New York Times that despite these moments, she told herself “the only option I had was life or death.”

“I heard this voice that said, ‘If you want to live, keep going.’ And as soon as I would doubt my intuition and try to go another way than where it was telling me, something would stop me, a branch would fall on me, I’d stub my toe, or I’d trip,” said Eller, 35, a physical therapist and yoga instructor. “So I was like, ‘OK, there is only one way to go.’ “

Eller was found injured Friday in the Makawao Forest Reserve.

The physical therapist from the Maui town of Haiku went missing on May 8. Her white Toyota RAV4 was found in the forest parking lot with her phone and wallet inside.

Hundreds of volunteers searched for her. Eller’s parents offered a $10,000 reward to encourage people to find her.

Eller told the Times that she had intended to go on a short trail walk. She went off the path at one point to rest, and when she resumed hiking, she got turned around.

“I wanted to go back the way I’d come, but my gut was leading me another way – and I have a very strong gut instinct,” Eller said. “So, I said, my car is this way and I’m just going to keep going until I reach it.”

She said she kept trying to get back to her car but wound up going deeper into the jungle.

During her ordeal, she fell off a cliff, which led her to fracture her leg and tear the meniscus in her knee, a friend, Katie York, told the Times.

Finally, after 17 days of wandering, she saw a helicopter that had been sent to find her.

“I looked up and they were right on top of me,” Eller told the Times. “I was like, ‘Oh my God,’ and I just broke down and started bawling.”

Javier Cantellops said he was searching for Eller from a helicopter along with Chris Berquist and Troy Helmers when they spotted her about 3:45 p.m. Friday near the Kailua reservoir, according to Maui Police Department spokesman Lt. Gregg Okamoto and the Honolulu Star-Advertiser.

Cantellops told the newspaper that she was in the bed of a creek with waterfalls on either side.

He told CNN he saw Eller waving her hands at the helicopter.

“It was unbelievable, dude,” Cantellops said. “Seeing her for the first time in a long time was just unbelievable. It was nothing short of elation.”

Eller was in an area with thick vegetation, he said. “That vegetation is so thick, it’s a miracle that we saw her,” Cantellops told CNN.

The Maui Fire Department brought Eller to a hospital for evaluation, Okamoto said in a statement.

Her mother, Julia, told the Maui News that Amanda Eller survived by staying near a water source and eating wild raspberries and strawberry guavas. She even ate a couple of moths, Julia Eller said.

Her daughter tried to catch some crawfish, but she was “not very successful,” Julia Eller said.

“She lost quite a bit of weight, as you can imagine, being lost for that amount of time,” Julia Eller said. “But she was able to survive it. She had the right skills and did the right things to buy time so that we had a chance to find her.”

Amanda Eller suffered a leg fracture, abrasions on her ankles and a severe sunburn, but Julia Eller told the Maui News that her daughter’s spirits were good.

“And all of those things are treatable,” Julia Eller said.