Planned Parenthood’s license for its St. Louis clinic is set to expire Friday unless the state renews it. 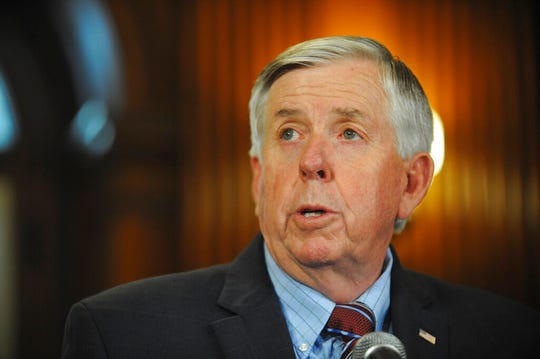 Gov. Mike Parson addresses the media during a press conference in his Jefferson City, MO, Capitol office Wednesday, May 29, 2019, regarding the state of operations of a Planned Parenthood facility in St. Louis. The clinic has two days to remedy the issues found or face non-renewal of their operating license. (Photo: Julie Smith, AP)

St. Louis – Missouri Gov. Mike Parson on Wednesday doubled down on the state’s threat not to renew the license of the only abortion clinic in the state and said it would be “reckless” for a judge to weigh in until the state takes action.

Planned Parenthood’s license for its St. Louis clinic is set to expire Friday unless the state renews it. But Parson said the state health department found “a series of deficiencies” at the clinic.

He did not discuss details, citing an ongoing investigation, but repeated the state’s request to interview physicians who worked at the facility.

“Planned Parenthood’s apparent disregard for the law, their failure to complete complication records, and the accuracy of medical records are all serious concerns that need to be addressed prior to any license renewal,” Parson said. “They still have two days to comply.”

Planned Parenthood on Tuesday preemptively sued to ensure abortion services continue in St. Louis. A Wednesday court hearing on the lawsuit was postponed until Thursday.

According to Planned Parenthood’s lawsuit, the state health department visited the clinic in April to investigate a patient complaint. Planned Parenthood says the agency hasn’t specified the complaint, but said its subsequent “investigation has identified a large number of potential deficient practices requiring explanation by the physicians directly involved in patient care, as well as the attending physicians.”

The lawsuit says the state wanted to interview seven physicians, including medical fellows who no longer provide care at the clinic. It says two staff doctors agreed but the others did not, and Planned Parenthood can’t compel them because they’re not staff. According to the lawsuit, the health department won’t decide on renewing Planned Parenthood’s license until the investigation is complete.

If the license is not renewed, the organization says Missouri would become the first state without a functioning abortion clinic since the 1973 Roe v. Wade Supreme Court decision.

Parson said court proceedings should wait until after the state decides whether to renew Planned Parenthood’s license.

“It would be reckless for any judge to grant a temporary restraining order ruling before the state has taken action on a license renewal,” Parson said. “No judge should give special treatment to Planned Parenthood in this instance.”

The dispute comes days after Parson signed a bill banning abortions on or beyond the eighth week of pregnancy, with no exceptions for rape or incest. Missouri is among half a dozen states that have passed sweeping anti-abortion measures.

If the St. Louis clinic no longer can provide abortions, the nearest clinics performing abortions are in a Kansas suburb of Kansas City and in Granite City, Illinois, just across the Mississippi River from St. Louis. The Kansas clinic is about 260 miles (420 kilometers) from St. Louis.

Even before the latest legislation, Missouri already had some of the most restrictive abortion regulations in the nation, including a requirement that doctors performing abortions have partnerships with nearby hospitals.

A total of 2,910 abortions occurred in 2018 in Missouri, according to provisional data provided by the state health department. That includes 433 abortions at eight weeks of pregnancy and 267 at six weeks or earlier.