Cuba restrictions hit cruise lines at the start of summer

Cuba restrictions hit cruise lines at the start of summer

A Royal Caribbean Cruise ship called the Majesty of the Seas sets out at Port Everglades and will no longer go to Cuba, on Wednesday, June 5, 2019, in Fort Lauderdale, Fla. (Photo: Brynn Anderson, AP)

Miami – The Trump administration’s new restrictions on travel to Cuba will hit hardest at the cruise industry, taking away a new and increasingly popular destination at the start of the critical summer vacation season.

Major cruise lines immediately dropped stops in Cuba from their itineraries and hastily rerouted ships to other destinations including Mexico.

Nearly 800,000 passengers already on cruises or booked for future trips were affected, according to the Cruise Lines International Association, an industry trade group.

At docks in Florida and aboard ships at sea, frustrated travelers vented Wednesday over wrecked vacation plans. In New York, shares of cruise line companies fell in midday trading. 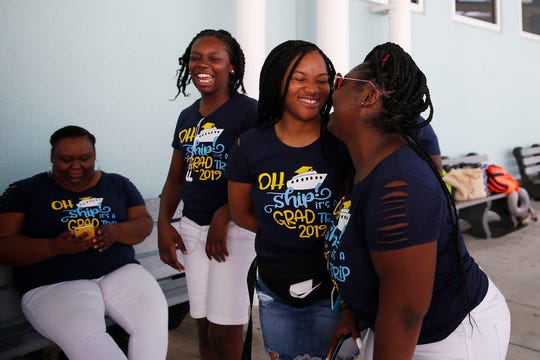 Passengers wait to board a Royal Caribbean Cruise that will no longer go to Cuba at Port Everglades on Wednesday, June 5, 2019, in Fort Lauderdale, Fla. (Photo: Brynn Anderson, AP)

“We have a ship full of disappointed and angry people,” said Darcy Van Zijl of Cape Coral, Florida, who had planned to celebrate her 45th birthday with a cruise to Havana.

The U.S. Commerce Department announced the new regulations Tuesday to take effect Wednesday. Cruise lines that carried passengers for “people-to-people” travel to Cuba were told they could not continue. The restrictions effectively made it illegal to cruise from the U.S. to Cuba, according to the industry group.

Cuba trips represented a relatively small percentage of passenger cruises – about 3% or 4% for Norwegian Cruise Line Holdings and even less for Royal Caribbean Cruises and Carnival Corp., according to UBS analysts.

But passengers typically paid more to visit the island. Cuban itineraries commanded premiums of up to 20% over cruises to the Bahamas, according to UBS analyst Robin Farley. 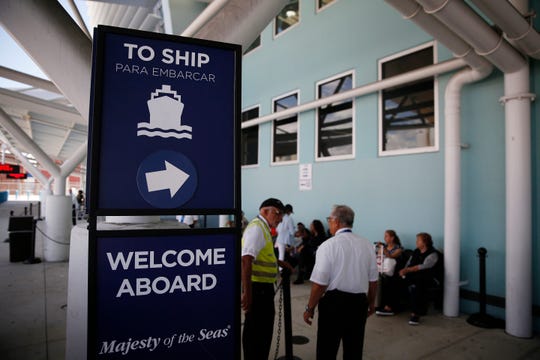 “This is going to have a noticeable impact on the cruise lines’ earnings this quarter and the rest of this year and likely into 2020,” said Henry Harteveldt, a travel analyst with Atmosphere Research Group.

At midday, shares of Norwegian were down 5%. Royal Caribbean was off 4%, and Carnival had dropped 3%.

After their first stop in Key West, Florida, Van Zijl and her daughter, sister and brother-in-law learned that the ship would sail for Nassau in the Bahamas instead of Havana.

“We paid a lot of money for this cruise … way more than a cruise to the Bahamas,” she texted to The Associated Press while her ship was at sea.

For Samantha Arceneaux and her husband, Nick, a cruise from Port Canaveral, Florida, to Cuba was to be their first trip alone since the birth of their daughter eight years ago. The Orlando woman arranged a camp for her daughter and picked a ship room with no view, thinking that she and her husband would spend most of their two days wandering around Havana. 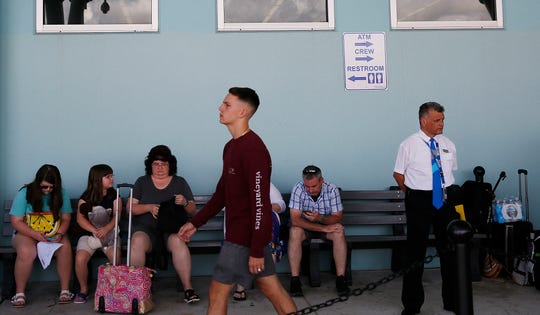 Passengers wait to board a Royal Caribbean Cruise that will no longer go to Cuba at Port Everglades on Wednesday, June 5, 2019, in Fort Lauderdale, Fla. (Photo: Brynn Anderson, AP)

Now the only stop by the Norwegian Cruise Line boat may be in Key West.

“I live in Florida. I could drive to Key West if I wanted to,” Arceneaux said. “That’s not why I’m paying thousands of dollars. It’s quite disappointing.”

Passengers booked to depart Wednesday showed up at Florida ports, only to learn that they weren’t going to Cuba.

At the dock in Fort Lauderdale, a Royal Caribbean employee tried to disrupt a reporter’s interviews with unhappy passengers, saying it wasn’t the company’s fault that the U.S. government had suddenly barred trips to Cuba.

Cruising from the United States to Cuba started in May 2016, as President Barack Obama moved to improve relations with the country.

Whether by boat or air, Cuba quickly became a romantic and slightly exotic destination that was just a short hop from Florida. The nation’s hotels and many other facilities are dated and not yet on par with other tourist stops in the Caribbean. That added to its appeal.

In the first four months of this year, nearly 143,000 people arrived in Cuba by ship, an increase of more than 300% over the same period last year.

“It has grown immensely in the past two years, especially the luxury and premium lines,” said Michael Consoli, an Atlanta-area agent for American Express-affiliated Cruise Planners.

Some travelers made repeat trips to the island, Consoli said, but a majority were curious first-timers who went “to check it off their bucket list.”

Nearly all the major cruise lines introduced Cuban itineraries that range from an overnight stay in Havana to three ports over a few days. For many passengers, it was their first cruise. 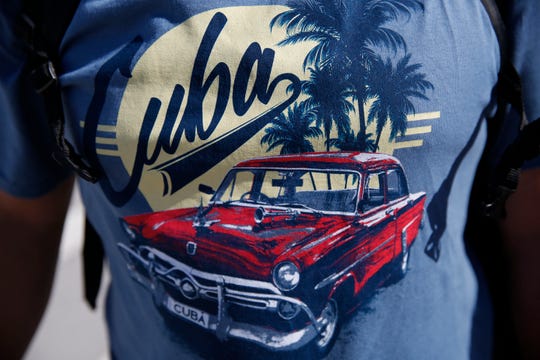 Israel Sepulveda, 43, of New York, wears a Cuba shirt as he leaves a cruise from Cuba out of Port Everglades on Wednesday, June 5, 2019, in Fort Lauderdale, Fla. (Photo: Brynn Anderson, AP)

As cruising to Cuba became easier, the ship lines continued to add the island to their itineraries, with new ships planning to arrive into next year, according to Colleen McDaniel, editor in chief of Cruise Critic, a website that posts reviews of cruises.

Speculation about tighter travel restrictions grew in recent months, as President Donald Trump imposed new sanctions that led Cuba to begin food rationing last month. The administration aims to cut off the flow of tourist dollars to the island.

Travelers returning from Cuba wondered how stopping the flow of American visitors will affect ordinary Cubans.

“I feel sorry for the people,” said Marsha Booth, a nurse from West Virginia, who returned Wednesday from Havana on board Royal Caribbean’s Majesty of the Seas.

“Our tour guide, when we took the classic car tour, he was so friendly – spoke wonderful English and was a Cuban native,” Booth said. “I just keep thinking about him. What is he going to do for a living now? How is he going to survive?”