Wednesday marked the third anniversary of the shootings at Pulse Nightclub, where 49 people were killed 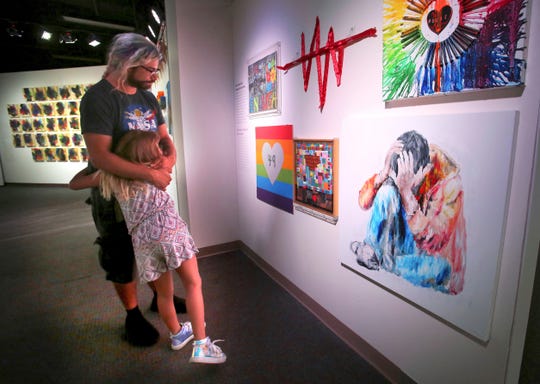 Orlando, Fla. — John Capo recalled one Tuesday night a few years ago when he went to the Pulse nightclub to celebrate his friend’s birthday.

“It was our safe haven where we could come and feel safe for just a moment,” Capo said. “That was my favorite moment.”

On Wednesday, he stood in the middle of Esther Street outside the nightclub, joining about 2,000 other people to honor and remember the victims, families and survivors on the third anniversary of the shooting, when a gunman opened fire on the dance floor of the gay club, killing 49 people and injuring dozens of others.

Capo paused and searched for his words as a violin began playing in the background.

“It feels like your stomach’s been ripped out of your heart,” said Capo, 50. “You just learn how to deal with it.”

Nightclub owner Barbara Poma reminded the crowd that it’s been 1,095 days since families were last able to hug their loved ones and survivors’ lives were changed forever.

“That number may seem daunting. But today, day number 1,095, you are still rising,” Poma said. “You are still proof that love wins.” A man in the crowd clutched a pink carnation as he wiped a tear from the corner of his eye.

Just a couple hours earlier, Gov. Ron DeSantis briefly stopped by the temporary memorial in front of Pulse, promising he would sign off on the $500,000 budgeted for a permanent memorial at the site.

After looking at the rainbow wall emblazoned with photos of the 49 who were killed in the gunfire, DeSantis and survivor Brandon Wolf shook hands. 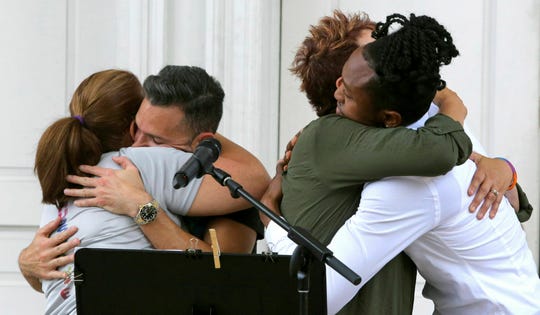 Participants in the reading of the 49 names of the victims in the Pulse nightclub massacre embrace at the conclusion of bells tolling, at First United Methodist Church in Orlando, Fla. (Photo: Joe Burbank, AP)

“It means a lot for you to be here, maybe more than you know,” Wolf said to DeSantis. “This community feels like we need allies and feels like we need to be heard. I really hope that this is a moment to start building that relationship.”

Later, at the Pulse remembrance ceremony, Orlando Mayor Buddy Dyer and Orange County Mayor Jerry Demings both spoke of the community coming together after the tragedy – the deadliest mass shooting in the U.S. at the time, only surpassed by the 2017 Las Vegas shooting – and jointly declared June 12 “Orlando United” day.

Dyer paused in his remarks to note a rainbow that had broken through the clouds.

People wore rainbow bandannas and hats and wore T-shirts printed with “May we never forget,” “Love is love” and “#OnePulse.” They waved flags and had painted faces. Almost everyone in the crowd wore a small rainbow ribbon pinned on their shirts.

They wrapped their arms around each other while they listened to the speeches and performances. And when the names of the 49 killed were read one by one, some cheered as their loved ones’ photos appeared on the screens. Others fought back tears.

Jesse Marius, 50, has attended the memorial for the past three years with her family. This year she’s sporting a rainbow Mohawk and a sign that reads “free mom hugs.”

“I know so many people that were raised to believe that being gay was wrong, and it was evil and it was a sin,” Marius said. “I learned differently and I want to pass along.”

As the event wrapped up, the crowd chanted, “We will never forget.” Then a line of about 30 people formed outside the Big Red Bus to donate blood.

DeSantis touched off controversy before he stopped by the Pulse memorial when he initially didn’t mention the LGBTQ and Hispanic communities in a proclamation Tuesday ordering flags at half-staff to commemorate the shooting’s third anniversary.

That drew ire from state Rep. Anna Eskamani, an Orlando Democrat, who called for an apology.

By Wednesday afternoon, DeSantis’ office issued a new proclamation, acknowledging that Florida “will not tolerate hatred towards the LGBTQ and Hispanic Communities,” and blamed it on a staff error.

DeSantis said “we fixed everything” as reporters asked him about the proclamation, though he didn’t take any more questions as he was ushered into his vehicle.