US Naval War College is getting its 1st female president

A helicopter pilot who heads a military command in Guam will be the first female leader of the U.S. Naval War College, the Navy announced Friday

US Naval War College is getting its 1st female president 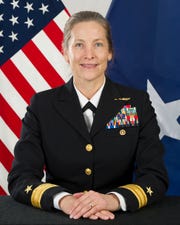 Providence, R.I. – A helicopter pilot who heads a military command in Guam will be the first female leader of the U.S. Naval War College, the Navy announced Friday, days after removing the college president who came under investigation over questionable behavior.

Rear Adm. Shoshana Chatfield will be the new president, Navy Secretary Richard Spencer said in a statement released after the school’s graduation ceremony, calling her a “historic choice.”

Rear Adm. Jeffrey Harley was removed as the college’s president Monday after The Associated Press reported he was under investigation and more than a year after the initial complaint was filed.

Spencer was at the post-graduate institution in Newport, Rhode Island, on Friday for graduation. About 550 students crossed the stage, and about 1,000 students graduated from the distance learning program. Spencer challenged them to be innovative and act with urgency.

Shortly afterward, he released the announcement about the school’s new leadership.

Chatfield served as commander of a provincial reconstruction team in Afghanistan in 2008 and as an assistant professor of political science at the United States Air Force Academy from 2001 to 2004. She assumed command in Guam, of Joint Region Marianas, in January 2017.

“She is the embodiment of the type of warrior-scholar we need now to lead this storied institution as it educates our next generation of leaders,” Spencer said in the statement.

Both Spencer and Adm. John Richardson, the chief of naval operations, were involved in picking Chatfield.

The AP reported Harley was under investigation for allegedly spending excessively, abusing his hiring authority and otherwise behaving inappropriately, including keeping a margarita machine in his office.

Richardson told the AP that though the investigation into Harley isn’t yet complete, he felt he had enough information to warrant removing Harley this week.

Richardson said he received reports from investigators around the same time the AP article was published. He called the AP report “responsible and balanced.”

A small group of longtime college employees filed an anonymous complaint about Harley in April 2018 with the Navy’s office of the inspector general. The group contacted the inspector general again in January with additional allegations of Harley flouting Navy rules and norms.

Inspector general investigations, across the Defense Department, routinely take months or more than a year.

Emails obtained by the AP show the college has struggled to make payroll under Harley’s leadership and spent about $725,000 annually on raises while facing an annual shortfall of $5 million or more.

Harley declined last week to answer a series of questions about the allegations, including his use of a margarita machine. He downplayed the complaints in a campuswide email, saying that they were from “a few individuals” and that all his decisions were subject to legal review and within his authority.