Police: Officer shot in ambush had no chance of survival

Police: Officer shot in ambush had no chance of survival

Sacramento, Calif. – A rookie Sacramento police officer who died during a domestic violence call was ambushed by a gunman and had no chance of surviving after she was shot, police said.

The disclosure came late Friday amid criticism that it took police 45 minutes to get to 26-year-old rookie Officer Tara O’Sullivan during the armed standoff. 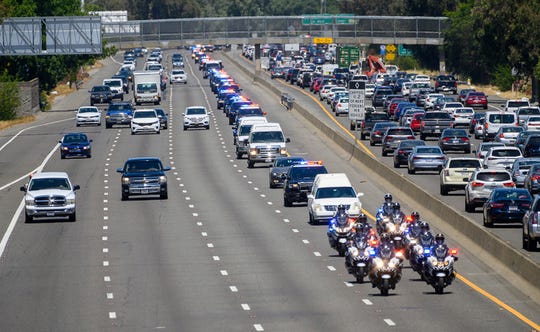 A funeral hearst is led by an honor procession for Sacramento police officer Tara O'Sullivan as they drives along Highway 99 on the outskirts of Sacramento, on its way to the funeral home in Elk Grove, Calif. on Friday, June 21, 2019. (Photo: Paul Kitagaki Jr., AP)

O’Sullivan was later pronounced dead at a hospital.

O’Sullivan was hit several times and one of the wounds was “non-survivable,” Sgt. Vance Chandler said at a news conference where the department released police body camera video of the Wednesday night attack.

Police Chief Daniel Hahn said the gunman had stashed two assault rifles , a shotgun and handgun in different rooms and opened fire as officers knocked on the door.

He said patrol car doors and protective vests couldn’t stop the high-powered rifle rounds, and if officers had tried to rescue their fallen colleague before an armored vehicle arrived, “we would have additional officers murdered.”

“Under the most dangerous and trying circumstances, our officers performed admirably,” the chief said.

O’Sullivan was standing behind her training officer, Daniel Chipp, when she was struck, police said.

Footage from Chipp’s body camera showed him approaching a detached garage with his gun drawn, knocking and calling out: “Hey, Adel, Police Department… You’re not under arrest, you’re not in trouble.”

The officer then opens a screen door and begins to cautiously enter the open doorway, asking Adel if he is inside and repeating: “You’re not in trouble, dude.”

At that moment, more than 20 rapid shots are heard. The officer runs for cover and radios that a high-powered rifle is being fired.

Police said the gunman had opened fire from a house behind the officers and barricaded the front door.

The charges against Ramos carry special circumstances, including that he killed O’Sullivan while lying in wait, an allegation that would allow authorities to seek the death penalty. However, that decision is months away and Gov. Gavin Newsom has imposed a moratorium on executions.

Ramos is set to appear Monday for his first court appearance. Public defender Norm Dawson said he couldn’t comment until he receives more details in the case.

Police said the gunman strategically shot at officers for hours, using all the weapons kept in different rooms. He surrendered after an eight-hour standoff.

Nine days before the officer’s killing, a judge issued a warrant for the arrest of Ramos for failing to appear on a charge of battering a young woman.

Police said the gunman opened fire as O’Sullivan and other officers helped an unidentified woman clear out her belongings from the garage of a North Sacramento home.

Police earlier found two guns in a neighboring home associated with Ramos and learned about the warrant in the battery case. Five officers went to find him before the ambush occurred, police said.

“I cannot tell you even in my (30-year) career where we had a misdemeanor bench warrant and we went out looking for somebody. That’s just not practical,” California Police Chiefs Association President Ronald Lawrence said. “Clearly you had a person who had a propensity for violence and wasn’t held accountable for earlier crimes.”

Ramos has a history of domestic violence restraining orders, but most recently was charged in November with simple battery against a minor woman in September.

Defense attorney and former prosecutor William Portanova, who is not associated with the case, said simple battery “means a slap or a push or a shove, but there’s no bruises or stitches or bleeding and nothing is broken.”

Ramos failed to appear in February and a bench warrant was issued then withdrawn when he resurfaced. Another was issued June 10 and was active when O’Sullivan was shot.

Sacramento County Sheriff’s Department spokeswoman Sgt. Tess Deterding said many times deputies won’t arrest lower-level fugitives even if they discover an outstanding warrant, because the offender would simply be released again with a new order to appear in court.

“I think it largely depends on the scenario at the time. Is this a person that needs to go to jail right now? Is this a solution to the problem that I have?” she said.

Portanova said it’s a reality of understaffed police agencies that so many warrants remain outstanding.

“Citizens are paying the price,” he said.