Centerville, Texas – A Texas sheriff says a reality-based detective show played a role in the recent arrest of an 84-year-old woman in the 1984 shooting death of her husband. 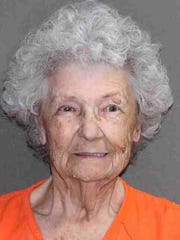 In this undated booking photo provided Wednesday, July 10, 2019, by the Leon County, Texas, Sheriff's Office is 84-year-old Norma Allbritton. Allbritton was arrested July 1 on a murder charge in the 1984 shooting death of her husband. (Photo: AP)

Leon County Sheriff Kevin Ellis said Wednesday that the arrest last week of Norma Allbritton was aided by the program “Cold Justice,” which contributed its own investigator, a retired district attorney and other expertise.

The death of Johnnie Allbritton in the couple’s home near Buffalo was revisited in 2015 by sheriff’s investigators and some evidence was later forwarded to the program. Buffalo is about 100 miles southeast of Dallas.

Ellis declined to say what new evidence was presented to the grand jury that indicted Norma Allbritton on a murder charge.

She bonded out of jail July 3. A message left Wednesday for her attorney wasn’t immediately returned.