A sharp drop in illegal border crossings, coming during a seasonal decline as summer heat sets in, has eased pressure temporarily.

San Diego — A new policy to deny asylum to anyone who shows up on the Mexican border after traveling through another country threatens to exacerbate overcrowding at severely strained U.S. immigration detention centers and makeshift holding areas.

Photos and video of Vice President Mike Pence’s visit Friday to McAllen, Texas, showing men crammed behind chain-link fences offered the latest glimpse into squalid conditions at Customs and Border Protection facilities. Women are being held in smaller tents at the station. 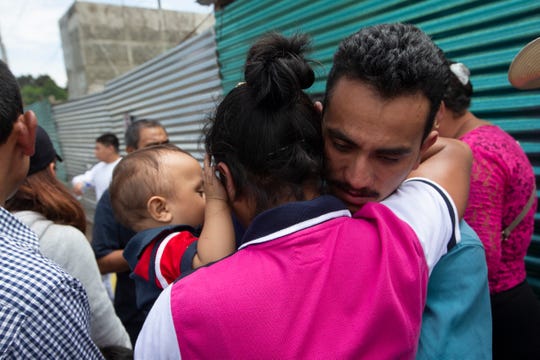 A Guatemalan migrant, who was deported from the United States, embraces relatives after arriving at the Air Force Base in Guatemala City, Tuesday, July 16, 2019. (Photo: Moises Castillo, AP)

The Border Patrol housed 900 people in an area with capacity for 125 in El Paso, Texas, according to a Department of Homeland Security’s internal watchdog report on an unannounced visit in May. Inspectors saw detainees standing on toilets to gain breathing space. Agents described detainees being held in standing-room-only cells for weeks.

A sharp drop in illegal border crossings, coming during a seasonal decline as summer heat sets in, has eased pressure temporarily. The Border Patrol has fewer than 10,000 people in custody, down from 19,000 in May, according to a U.S. official who was not authorized to share the figures publicly and spoke on condition of anonymity.

The Border Patrol’s Rio Grande Valley sector, the busiest corridor for illegal crossings, was the only one of nine sectors on the Mexican border over capacity on Wednesday, with about 6,000 detainees, the official said. El Paso has plummeted to 500 detainees.

Still, the space crunch is daunting and holding people who are denied asylum until they are deported can only pose more challenges. 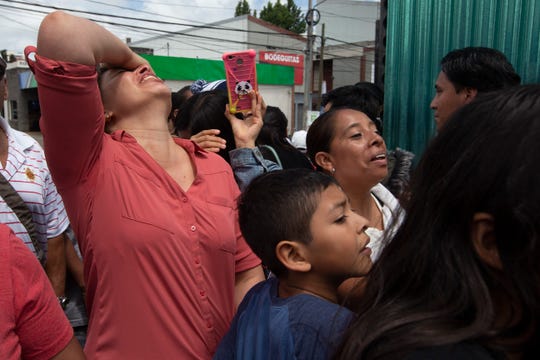 Family members wait outside the Air Force Base for the arrival of their relatives who were deported from the United States, in Guatemala City, Tuesday, July 16, 2019. (Photo: Moises Castillo, AP)

Immigration and Customs Enforcement operates long-term detention centers that are far better equipped, but that agency is also heavily burdened. It is holding more than 53,000 people, hovering near an all-time high and above its budgeted capacity of 45,274, including 2,500 spots for families.

ICE, responding to scarce detention space for families, has released more than 200,000 family members since October under a new practice that does not allow time to make travel arrangements while in custody. It currently houses 311 people in families.

“Ensuring there are sufficient beds available to meet the current demand for detention space is crucial to the success of ICE’s overall mission,” the agency said in a statement.

CBP officials did not immediately respond to a request for comment.

The dramatic policy change took effect Tuesday, denying asylum to anyone who must pass through Mexico to reach the U.S. by land. It will have the biggest impact on Guatemalans and Hondurans, who account for most Border Patrol arrests and tend to travel in families. 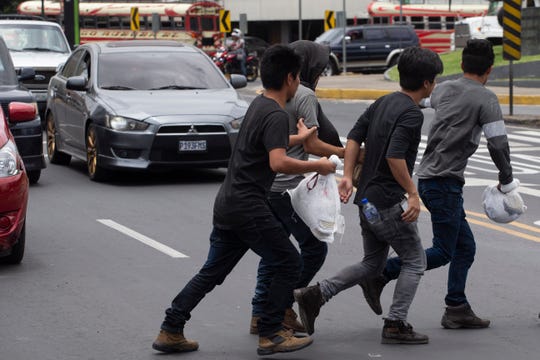 If it survives legal challenges, the policy would affect people from any country traveling through Mexico unless they sought asylum in at least one other country and were denied. There are exceptions for victims of “a severe form” of human trafficking, as well as other forms of humanitarian protection that are similar to asylum but have a much higher bar to qualify.

Linerio Gonzalez and Ana Paolini of Venezuela were in a group of 15 migrants, including four children, who showed up at the international bridge in Nuevo Laredo, across the border from Laredo, Texas, to take their chances. They were eager to enter the United States despite confusion about how the policy would affect them.

“It drives you to desperation,” said Gonzalez, 24.

Hours after it went into effect, the policy drew two lawsuits in federal court, one in San Francisco and one in Washington, D.C. Both lawsuits ask for an order to immediately halt the policy while it is challenged in court. The American Civil Liberties Union and other groups requested a hearing Thursday in the San Francisco case.

Those who lose asylum bids would be placed in fast-track deportation proceedings and flown to their home countries. That’s where challenges may mount.

It usually takes several days to arrange travel documents and flights for Central Americans, and the only ICE family detention centers are in Texas and Pennsylvania. It is more difficult (and expensive) to arrange travel to faraway countries like Cameroon, whose people have been arriving at the border to seek asylum after flying to Ecuador and traveling through seven other countries.

Cuba, whose people have been seeking asylum in El Paso and Laredo, Texas, is labeled one of nine “recalcitrant” countries in the world by the U.S. government for its unwillingness to take back its own citizens, according to a Congressional Research Service report in November. Cubans tend to fly to Panama and then travel overland through five countries or fly to Nicaragua and go by land through three countries. 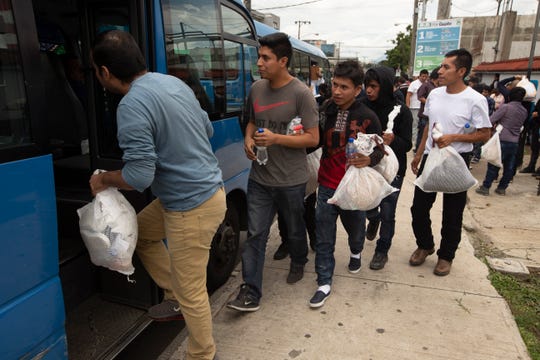 Guatemalan men who were deported from the United States, board a bus after arriving at the Air Force Base in Guatemala City, Tuesday, July 16, 2019. Nearly 200 Guatemalan migrants have been deported on Tuesday, the day the Trump administration planned to launch a drastic policy change designed to end asylum protections for most migrants who travel through another country to reach the United States. (Photo: Moises Castillo, AP)

The administration has been expanding temporary detention space, which would offer relief. CBP began construction last week on a holding center with tents for 2,500 single adults near El Paso, with plans to open by early August, spokesman Roger Maier said. The site in Tornillo, Texas, was used last year to house more than 2,000 unaccompanied children.

The U.S. Department of Health and Human Services just opened a facility to detain children at Carrizo Springs, Texas, at the site of a former “man camp” for oilfield workers. The holding facility can accommodate up to 1,300 children.