‘One small step’ and other notable quotes on moon landing

Quotes on Apollo program from JFK to Nixon

‘One small step’ and other notable quotes on moon landing

“I believe this nation should commit itself to achieving the goal, before the decade is out, of landing a man on the moon and returning him safely to Earth.” – President John F. Kennedy in special State of the Union message on May 25, 1961. 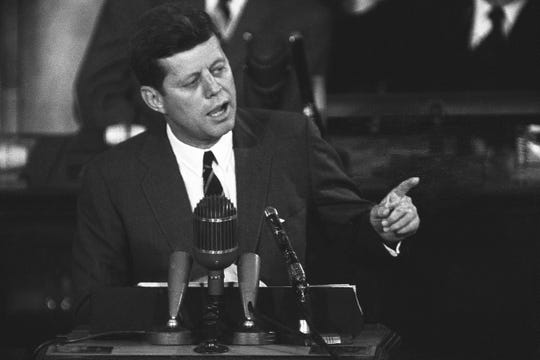 In this May 25, 1961 file photo, President John F. Kennedy speaks before a joint session of Congress in Washington, urging congressional approval of additional funds to bolster space, foreign aid and defense programs. "I believe this nation should commit itself to achieving the goal, before the decade is out, of landing a man on the moon and returning him safely to Earth." (Photo: AP)

“Houston, Tranquility Base here. The Eagle has landed.” – NASA astronaut Neil Armstrong after landing on the moon July 20, 1969.

”That’s one small step for man, one giant leap for mankind.” – Armstrong as he stepped onto the moon. He later said he meant to say “for a man.”

“For one priceless moment in the whole history of man, all the people on this Earth are truly one.” President Richard Nixon, in telephone call to Armstrong and Aldrin while they were on the moon.

“Here men from the planet Earth first set foot upon the moon. July 1969 A.D. We came in peace for all mankind.” – plaque on lunar module.