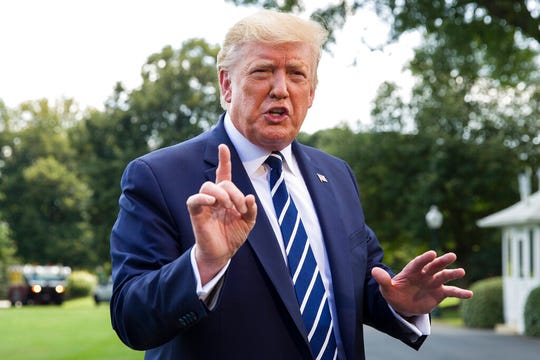 Washington – President Donald Trump is flipping interest-rate theory on its head as he tries to blame the Fed for holding back growth.

Trump went after the Federal Reserve on Friday after advancing a dubious argument this week that blue-collar workers have gained the most from the strong stock market.

A look at both matters:

TRUMP on Twitter: “Because of the faulty thought process we have going for us at the Federal Reserve, we pay much higher interest rates than countries that are no match for us economically. In other words, our interest costs are much higher than other countries, when they should be lower. Correct!” and “We are in a World competition, & winning big,…….but it is no thanks to the Federal Reserve. Had they not acted so fast and ‘so much,’ we would be doing even better than we are doing right now.”

THE FACTS: Trump’s support for the Fed slashing rates to rival Europe’s lows flies in the face of basic economics.

He’s repeatedly said the Fed has been stifling stronger growth and openly criticized Fed Chairman Jerome Powell, his own choice to lead the U.S. central bank.

But the Fed’s decision to hike rates four times last year was based on the belief that U.S. growth had strengthened and that there was an eventual risk of inflation or asset bubbles that might hurt the economy if the Fed kept short-term rates too low. The general theory is that central banks cut rates in countries in a downturn or period of weak growth, a bit of stimulus meant to get an economy back on track.

In fact, Trump was mistakenly critical of Fed efforts to revive growth during Barack Obama’s presidency, when he argued the issue from the other side. Trump tweeted in 2011 that “reckless policies of low interest and flooding the market with dollars” would cause record inflation. But that inflation never materialized because the economy was still recovering from the Great Recession.

Even with last year’s Fed rate hikes, the borrowing costs of the U.S. government are historically low. They’ve even declined recently as financial markets have adjusted to the likelihood of slower economic growth this year and the possibility of Fed rate cuts.

The interest charged on U.S. 10-year Treasury notes has fallen from nearly 16% in 1981 to roughly 2% today despite an explosion in government borrowing. This decline has made it easier to finance deficit spending such as Trump’s 2017 tax cuts that were meant to achieve stronger growth over the long term.

One clear reason is that growth is anemic in those countries.

According to data provider FactSet, the U.S. economy is expected to grow significantly faster than the economies of Britain, France, Germany and Japan. The market and the central banks judge that those countries need the stimulus from rates that are close to zero, or even negative.

Still, investors believe the U.S. economy also needs a boost because the benefits of Trump’s tax cuts have waned and uncertainty over the administration’s trade battles with China and other nations. They expect a rate cut at the Fed’s July meeting – a sign that lower rates might be needed to keep the economy on course rather than propel it faster.

TRUMP: “I think a number that makes me the happiest is that, proportionately, the biggest gainer in this entire stock market – when you hear about how much has gone up – blue-collar workers, the biggest proportionate gainer.” – remarks at Cabinet meeting Tuesday.

THE FACTS: Wealthier Americans have largely benefited from the stock market gains, not blue-collar workers.

The problem with the president claiming the stock market has helped working-class Americans is that the richest 10% of the country controls 84% of stock market value, according to a Federal Reserve survey. Because they hold more stocks, wealthier Americans have inherently benefited more from the 19% gain in the Standard & Poor’s index of 500 stocks so far this year. About half of U.S. families even hold stocks, so plenty of people are getting little to no benefit from the stock market gains.

The statement fits a pattern in which Trump portrays policies that have comparatively favored the wealthy as primarily helping the middle class.

For example, the president promised in 2017 that his tax cuts would be a “middle-class miracle.” But much of the magic went to millionaires.

What Trump may be claiming with regard to the stock market is that working Americans are disproportionately benefiting in their 401(k) retirement savings.

Trump has said that 401(k) plans are up more than 50%. His data source is vague. During the Cabinet meeting, the president said, “Somebody told me.” But 401(k) balances have increased in large part due to routine contributions by workers and employers, not just stock market gains.

The Employee Benefit Research Institute shows that only one group of Americans has gotten an average annual 401(k) gain in excess of 50% during Trump’s presidency. These are workers age 25 to 34 who have fewer than five years at their current employer. At that age, the gains largely came from the regular contributions instead of the stock market. And the percentage gains look large because the account levels are relatively small.