Police investigate after man says he found baby in freezer

A St. Louis man says a box that had been in his mother’s freezer for decades contained the mummified remains of a newborn baby

Police investigate after man says he found baby in freezer

St. Louis – A St. Louis man says a box that had been in his mother’s freezer for decades contained the mummified remains of a newborn baby, which he discovered while cleaning out her home after she died.

Adam Smith told St. Louis media outlets that he opened the cardboard box Sunday expecting to find something like the top of his mother’s first wedding cake or money because she never had a bank account. Instead, he says he found an infant’s body and a pink blanket. 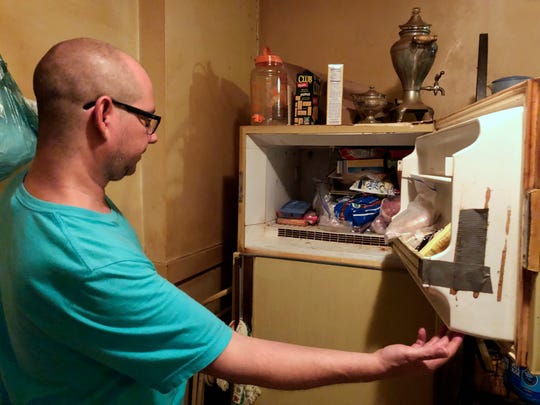 In this Monday, July 29, 2019 photo, Adam Smith peers into his mother's freezer in St. Louis, where he found the remains of an infant wrapped in a box she kept there for more than 40 years. (Photo: Christine Byers, AP)

St. Louis police confirmed that they are investigating a “suspicious death” involving an “unknown infant” found inside the home and that autopsy results were pending. However, police would not answer questions Tuesday beyond an incident summary released Monday. That summary said that police were called to the home just before 1 a.m. on Sunday and did not say where in the home the remains were found.

Smith said police questioned him for two hours and that he provided investigators with a DNA sample.

Smith said his mother took the box with her as she moved to four different apartments in St. Louis but that she wouldn’t answer her children’s questions about it. He said he remembers asking his mother when he was 7 or 8 years old why she seemed sad.

“All I can remember is that she told me, ‘My oldest child would have been 21 today,’” he recalled. “And that her name was ‘Jennifer.’”

His mother died from lung cancer on July 21 at the age of 68.

“Even as she was on her deathbed, she never told me what was in that box,” he said. “That’s what makes me think maybe she did something to this baby and didn’t want to tell anyone because she was afraid she would get in trouble.”