Baltimore – The only black member of President Donald Trump’s cabinet is comparing Baltimore to a cancer patient whose illness can have a devastating effect if ignored.

U.S. Housing and Urban Development Secretary Ben Carson spoke Wednesday in the wake of tweets from Trump describing Baltimore as a “disgusting, rat and rodent infested mess” where “no human being would want to live.”

Housing and Urban Development Secretary Ben Carson speaks during a news conference after touring the Hollins House, a high rise building housing seniors and persons with disabilities, during a trip to Baltimore, Wednesday, July 31, 2019. Carson highlighted the Hollins House, which has 130 one-bedroom units, as an opportunity zone where encourage investment and development in distressed communities. (AP Photo/Julio Cortez) (Photo: Julio Cortez, AP)

Carson worked in Baltimore for more than three decades and rose to fame for his groundbreaking surgeries at Johns Hopkins Hospital. He said Baltimore, like a cancer patient, cannot sweep its challenges under the rug.

“You can dress them up and put a nice suit on them, and you can try to ignore it, but that cancer is going to have a devastating effect,” Carson said. “You have to be willing to address that issue if you are ever going to solve it.”

Carson’s visit to Baltimore was not welcomed by everyone. A neighboring church demanded that Carson’s press conference be moved off their lot. Carson criticized that decision, calling the church’s attitude an example of people not wanting to collaborate to address Baltimore’s problems.

Earlier this week, Carson defended Trump against allegations of racism because of the incendiary tweets. He touted the president’s record on the economy and prison reform during an interview with Fox News.

“These are not things that a person who is a racist would do,” Carson said during the Monday interview.

He told reporters Wednesday that Trump is “very willing to work with people here in Baltimore, including with Elijah Cummings.” Cummings has represented Maryland in Congress for decades and currently chairs the House Oversight and Reform Committee, which is investigating the Trump administration, Trump family and White House.

Maryland’s 7th Congressional District, which Cummings represents, includes neighborhoods that have struggled with poverty and crime, like the one where Carson stopped Wednesday to tour a high-rise building that’s home to seniors and individuals with disabilities. The district also includes more affluent areas and landmarks such as Johns Hopkins University and its hospital, the Social Security Administration and the Centers for Medicare and Medicaid Services.

Thinking back on his many years working in Baltimore, Carson also recalled the poor condition of the homes some of his patients had to return to after he saved their lives.

“I spent a lot of time trying to give the children here in Baltimore a second chance at life, operating for hours and hours, all night sometimes, most of the times being successful, days later being in the dilemma about sending those kids back to some of the neighborhoods that I knew that they came from,” he said. Those neighborhoods, he said, had mice, roaches, ticks, rats and an “unabated lead problem” that affected the children’s mental development. 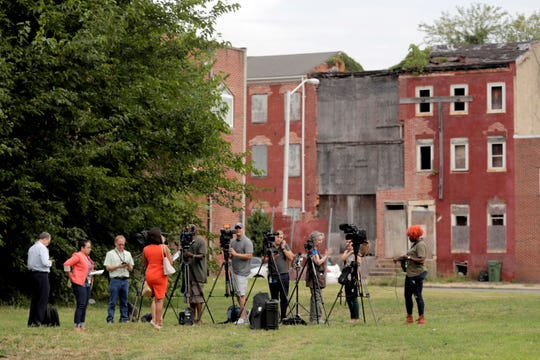 Carson touted the Trump administration’s “Opportunity Zones” program as a vehicle to bring investments and positive changes to Baltimore. The program offers massive tax breaks to developers who invest in certain low-income areas. One such area is the neighborhood Carson visited.

After Carson objected to having to move his news conference off the Morning Star Baptist Church of Christ property, a member said he asked HUD staff to move because nobody asked the church for permission. Church member Gregory Evans said he does not see Carson’s visit as a promising sign for the district.

“The man may have been a great neurosurgeon, but for him to be in housing makes no sense,” Evans said. “He’s stepping in Baltimore maybe because of what’s going on with the comments that the president’s made. I don’t think it’s going to be that big of a difference.”