Kingston, Tenn. – The Tennessee Valley Authority, long respected for providing good jobs and cheap electricity, is facing a growing backlash over its handling of a massive coal ash spill a decade ago, with potentially serious consequences for an industry often opposed to environmental regulation.

A jury in Knoxville decided within hours that the TVA’s contractor, Jacobs Engineering, breached its safety duties, exposing hundreds of cleanup workers to airborne “fly ash” with known carcinogens. The jurors said Jacobs’ actions were capable of making the workers sick. The key question of whether they caused each worker’s injuries was left for a different jury in a second phase of the civil trial. 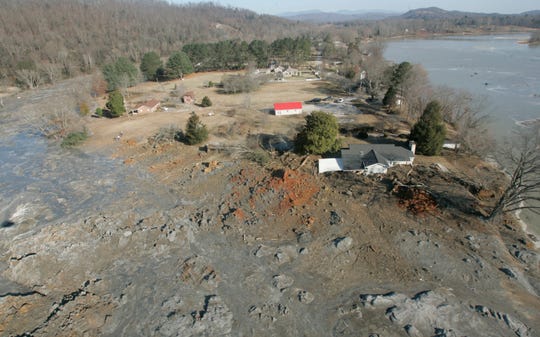 A backlash is growing from the Tennessee Valley Authority's handling of the nation's largest coal ash spill a decade ago. Workers said they were prohibited from wearing dust masks while cleaning up the ash and now suffer from cancers and lung diseases. The TVA contractor Jacobs Engineering denied their claims, saying the cleanup posed no health hazard. (Photo: Wade Payne, AP)

More than 200 workers blame the contractor for exposing them to ash they say caused a slew of illnesses, some fatal, including cancers of the lung, brain, blood and skin.

Despite last November’s favorable verdict for the first 72 plaintiffs, they won’t get monetary damages unless they can prove exactly what caused their specific illnesses. The judge, alluding to their urgent need for medical care, ordered mediation. More than a hundred other plaintiffs await the outcome.

“To have the burden put on you, that you have to prove what caused these horrific things – that’s an atrocity,” said Janie Clark, whose husband, Ansol, has a rare blood cancer after driving a fuel truck at the site. “I guess that’s just the law.”

Jacobs’ attorney, Theodore Boutrous, said the company “was doing its best to help manage the cleanup in a way that is safe – that the regulators have said is safe.” He stressed that it hasn’t been proven that Jacobs – or even coal ash – is to blame for any illnesses.

The workers encountered a moonscape after a leaking six-story earthen dam collapsed at the TVA’s Kingston Fossil Plant on Dec. 22, 2008, releasing more than a billion gallons of coal ash. It remains the largest industrial spill in modern U.S. history. It also prompted the EPA to begin regulating coal ash storage at more than 1,000 active ash dumps around the country, although not as stringently as environmentalists would like.

The TVA paid for as many as 900 people to contain and remove the pollution, some working 12-hour shifts for months at a time. The sludge dried into a fine dust that sparkled like glitter and sometimes whirled into clouds so thick, drivers could barely see past the hoods of their trucks.

In Associated Press interviews, workers said they were healthy before breathing the ash, but have since suffered unusual symptoms. They recalled joking darkly about “coal ash flu” before suffering strange lesions and seeing their skin flake off like fish scales. At least 40 co-workers have died, they said, some gruesomely, collapsing and coughing up blood.

“We cleaned it up in a little over five years, and it would’ve took 25 years to do it the right way,” said Doug Bledsoe, who drove trucks there and now has brain and lung cancer.

“They didn’t want people driving by and seeing people with masks. That was the answer I got,” Schwartz said.

Bock, at trial, denied the workers’ allegations that he ordered dust masks destroyed or discouraged their use.

The TVA is not a defendant and hasn’t commented on these personal injury cases, other than to say Jacobs was responsible for worker safety . With its reputation at stake, the agency stresses that coal ash is classified as “nonhazardous” by the EPA.”

Duke University geochemist Avner Vengosh, who is not involved in the litigation, tested ash from the Kingston spill and found high levels of radioactivity and toxic metals, including arsenic and mercury. In a statement about his 2009 peer-reviewed study, he warned that inhaling airborne particles could “have a severe health impact on local residents or workers.”

But the workers said Jacobs safety supervisors told them “you could eat a pound of it a day and it wouldn’t hurt you.”

Ron Bledsoe, a truck driver who now struggles to breathe with chronic obstructive pulmonary disease, said supervisors made a big deal about safety glasses and steel-toed boots but downplayed the fly ash swirling around them.

Jacobs officials testified they followed regulations for air monitoring, with results verified by outside agencies, and found the workers were never exposed to dangerous levels. Workers testified they witnessed the monitoring being manipulated.

Regardless, experts say there isn’t enough research to establish a safe level of prolonged exposure to fly ash.

“We need more research, because people are potentially getting sick from coal ash,” said Kristina Zierold, an epidemiologist at the University of Alabama at Birmingham who is not involved in the lawsuits. She compared it to the concerted effort it took to prove scientifically that smoking causes illness.

Regulations apply to dust in general and to many of the individual elements of fly ash, but more work is needed to understand what happens in the body when all those toxic chemicals are breathed in together. That’s one reason some of the workers may have an uphill battle proving their particular illnesses resulted from prolonged exposure, said Paul Terry, an epidemiologist at the University of Tennessee, Knoxville, who testified for the workers.

At a TVA board meeting last week, Janie Clark pleaded for help with workers’ medical bills.