For public officials in Akron, no amount of money will restore the families and institutions upended by prescription painkillers, heroin and fentanyl

Akron, Ohio – The tentative settlement involving the opioid crisis and the maker of OxyContin could mean that thousands of local governments will one day be paid back for some of the costs of responding to the epidemic.

But for public officials in Akron, no amount of money will restore the families and institutions that were upended by prescription painkillers, heroin and fentanyl.

“The overwhelming sense of hopelessness that took over this community in 2016, you can’t monetize that,” former Assistant Summit County Prosecutor Greta Johnson told lawyers in a deposition in January. “Every single day the newspaper was reporting on the overdose death rates. You could not go into a community setting where there were not weeping mothers talking about their children.” 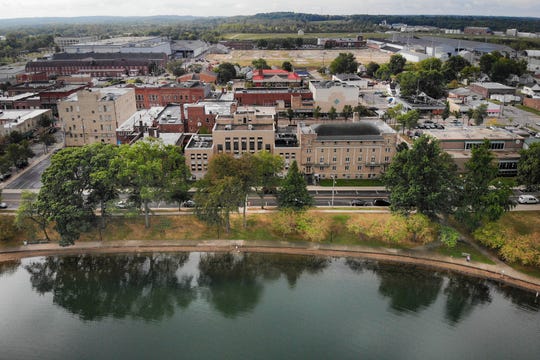 Trees are reflected in a river beside the downtown district, Thursday, Sept. 12, 2019, in Barberton, Ohio. Summit County's estimated payout from the $12 billion tentative Purdue settlement was estimated at $13.2 million. Akron would receive about $3.7 million. Barberton, the county's second-largest city, would receive $492,000. (Photo: Angie Wang, AP)

OxyContin maker Purdue Pharma struck a proposed deal Wednesday with about half the states and thousands of local governments over its role in the crisis. But criticism by several state attorneys general clouded prospects for an end to litigation against the company and the family that owns it.

Some people in Akron say the once-proud rubber capital of the world will never be the same. Hundreds of overdose deaths shattered families, orphaned children, exhausted first responders and drained government resources. At one point, city officials needed a mobile morgue to house all the corpses.

Ohio’s fifth-largest city and the surrounding Summit County were scheduled to be the first of some 2,000 governments, along with Cleveland’s Cuyahoga County, to go to trial against drugmakers next month. Local officials sought damages from the manufacturers they hold responsible.

Overdose deaths – which hit 340, or nearly one a day, in 2016 – took a toll on the county medical examiner’s budget and her staff. At the height of the scourge, they often had to perform two or more drug-related autopsies in an average day.

Dr. Lisa Kohler, the county’s chief medical examiner, recalled “the mental stress of dealing with repeated cases of having multiple deaths in the same families over a period of weeks to months.”

The calls about overdose deaths were constant, and “it just felt like it was never going to stop,” Kohler said.

The need for the mobile morgue laid bare the devastating extent of the crisis. The trailers were originally intended for a mass-fatality event, such as a natural disaster, plane crash or terrorist attack.

Akron Fire Chief Clarence Tucker said it sometimes felt as if his community was under attack.

“We handle 45,000 calls a year, and it just kept climbing and climbing,” he said. The fire department had to accelerate maintenance schedules on vehicles, mobilize off-duty paramedics and cope with staff burnout. 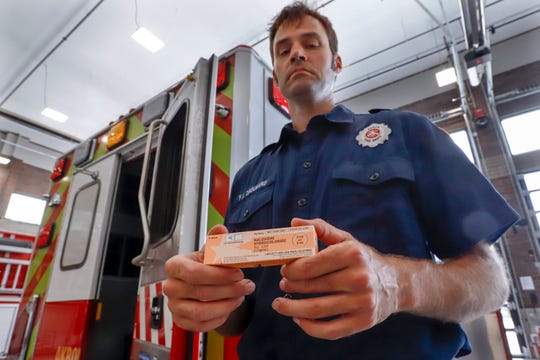 In this Sept. 11, 2019, photo, Akron fire medic Paul Drouhard shows a box containing naloxone that is carried in all the department's emergency vehicles. The drug commonly called Narcan is used primarily to treat narcotic overdoses. The tentative settlement involving the opioid crisis and the maker of OxyContin, Purdue Pharma, could mean that thousands of local governments will one day be paid back for some of the costs of responding to the epidemic. (Photo: Keith Srakocic, AP)

“You can get a call someone has overdosed and you get there, you can bring them back with Narcan. Then you’ll go to the same address in the afternoon,” Tucker said. “Or you go to that address in the morning and the two parents have overdosed and there’s a child there. It’s just horrible. It really is.”

Summit County’s estimated payout from the $12 billion tentative Purdue settlement was estimated at $13.2 million. Akron would receive about $3.7 million. Barberton, the county’s second-largest city, would receive $492,000.

Those dollars are intended to compensate for the many financial effects of opioids, including not only the demands on fire, police and medical services, but the crowded jails, the bulging foster-care system, the bursting drug-court dockets, the overloaded addiction programs and the inundated emergency rooms.

Summit County Common Pleas Judge Joy Malek Oldfield sees about 50 felony offenders in her drug court every Monday morning. It’s one of two drug-court dockets totaling 80 to 100 people, about double the number before the crisis.

“We’re nearing capacity for both dockets, and most of them are opiate-dependent,” Oldfield said.

In the past, when most drug offenders used crack cocaine or marijuana, “the treatment was tailored to those users,” Oldfield said. “If someone had a bad day and relapsed, they didn’t die.” But opioid addiction is fierce and often requires residential treatment, the judge said.

By October 2017, the opioid outlook was so bad that County Executive Ilene Shapiro declared an emergency, noting in her proclamation that “local response efforts have been exhausted and local resources in Summit County have been overwhelmed, and capabilities have been exceeded.” That year, the county saw another 269 overdose deaths.

“They’ve had to be everything. Not just law enforcers, but social workers and drug counselors, trying to hook everybody up with resources,” Morber said. “These poor young officers have done more death notifications in their short time span in 10 years than I have done my whole career.”

Thomas Heitic, chef and general manager of the Green Diamond Grille and Pub, said he hoped the settlement would offer more money for addiction counseling.

“Any of this money that goes towards awareness to me is a joke. We’re all aware of what’s going on. Our medical examiner had to bring in refrigerated trucks because the bodies were piling up. We’re constantly aware of this problem. We need to focus, use that money to focus on treatment.”