Austin, Texas – Former Republican Rep. Pete Sessions’ climb back into Congress was already off to a rough start, with some in his own party suggesting he was carpetbagging by leaving the Dallas district he lost last fall to try to get elected in a far more rural and politically safe one.

Now he may have bigger problems: a federal indictment that appears to link him to a campaign finance scheme and the Ukraine scandal at the heart of the impeachment investigation.

Sessions spent 22 years in Congress becoming a powerful Republican voice and the muscle behind the GOP’s House takeover of 2010. But Texas’ shifting demographics saw his once reliably red district become a tossup, and Sessions lost in November to Democrat Colin Allred, a former NFL linebacker. 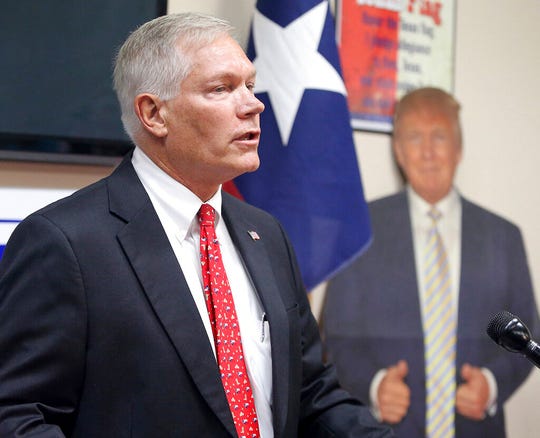 Former US Rep. Pete Sessions speak to the McLennan County Republican Party Thursday, Oct. 3, 2019, in Waco, Texas as he runs to fill the seat of Bill Flores who is stepping down. (Photo: Jerry Larson, AP)

Last week, he announced an attempted comeback in his boyhood hometown of Waco, about 100 miles (160 kilometers) south of Dallas, running for a seat being vacated by Rep. Bill Flores, one of six Texas GOP congressman retiring next year.

What looked like a veteran Republican seeking greener pastures as the party increasingly loses support in cities and surrounding suburbs even in fiercely conservative Texas got further complicated Thursday, when two Florida businessmen tied to Rudy Giuliani and the Ukraine impeachment investigation were charged with federal campaign finance violations relating to a $325,000 donation to a group supporting President Donald Trump’s reelection.

Both men, Lev Parnas and Igor Fruman, are Soviet-born.

Prosecutors allege that Parnas urged a congressman to seek the ouster of the U.S. ambassador to Ukraine at the behest of Ukrainian government officials. That happened about the same time that Parnas and Fruman committed to raising more than $20,000 for the politician.

The indictment does not accuse Sessions of wrongdoing or mention him by name, simply referring to the person as “Congressman 1.” But donations made by Parnas and Fruman match campaign finances reports for Session.

“It’s awfully difficult to introduce yourself outside the district anyway and coupled with some untimely headlines … it’s tougher,” said Joe Brettell, a Republican strategist in Houston. Of Sessions, he said: “I think he’s got a lot of talent and a lot of experience, but it may be time for him to try another way to serve the state.”

Sessions said his first meeting with Parnas and Fruman was to discuss energy independence in Ukraine. He said he recalled “a couple additional meetings” over time but did not elaborate.

“There was no request in the meeting, and I took no action,” Sessions said.

In May 2018, Parnas posted a photo of himself and David Correia, his business partner who is also charged, with Sessions in his Capitol Hill office. The caption read: “Hard at work!!”

Flores, who has served a decade in Congress, had already slammed Sessions’ planned run in an op-ed, calling it “unacceptable that someone from outside” the district would “attempt to drop in and to try to elbow his way to the front of the line.”

Similarly, GOP operatives in Washington said few in the party leadership there or in Texas were encouraging Sessions to run even before the revelations – arguing that last year’s loss revealed him to be a flawed candidate.

Still, Lance Phillips, chairman of the Republican Party in Limestone County, part of what would be Sessions’ new district, said he polled area party leaders in the area before personally urging Sessions to run and found a lot of support since no other major candidate was emerging to replace Flores.

Phillips also said he and others were excited by Sessions’ past experience and seniority in Congress, which would help restore some of the congressional clout Texas is losing with so many House retirements. He said Thursday’s arrests won’t change that – and suggested that the case was politically motivated.

“They’ve been so flooded with the fake news on all of the different stuff that a lot of this doesn’t really grab hold of anybody anymore,” said Phillips, who noted that – before redistricting – Sessions once represented the part of Texas where he will now be running.

He added: “This is a swat at him. I’m sure the Democrats don’t want Pete back up there because he gave them a real hard time last time.”

Sessions, 64, announced his plans to run in Flores’ district without yet moving there. He was the House GOP’s campaign chairman in 2010, when the Republicans took back the chamber in the first midterm election under then-President Barack Obama. He seldom faced a real reelection challenge until last year while serving as chairman of the powerful House Rules Committee.

Sessions says he’s been friends with Giuliani for more than 30 years but does not know of his business or legal activities in Ukraine. He also said he could not confirm he was “Congressman 1,” but that if he was, he could not have had any knowledge or involvement in the scheme.

So far, Sessions remains the only major Republican planning to run in the primary for Flores’ seat – though the Texas filing deadline is still two months away.

Wes Lloyd, among a handful of Republicans in the district considering a run, said Sessions should go back home if he wants a GOP majority again in the House.

“Take your talent and your money and all that and go run in a swing district like the one you just surrendered to Nancy Pelosi,” Lloyd said.