The Homestead, Florida, facility emptied out in August but had remained operational in case there was no room at shelters for teen migrants.

Miami – The Trump administration announced Monday that it is shutting down one of the largest U.S. facilities for child migrants, which had come under intense criticism because of its regimented conditions and the contractor’s ties to a freshly departed White House official.

The U.S. Department of Health and Human Services said in a statement that it has reduced bed capacity from 1,200 to zero and the contract with Comprehensive Health Services Inc. is set to end on Nov. 30. About 2,000 workers will be let go in the coming days. 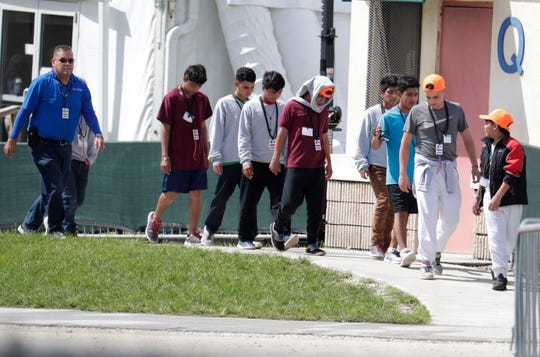 The Homestead, Florida, facility emptied out in August but had remained operational in case there was no room at shelters for teen migrants who cross the U.S.-Mexico border and end up in government custody.

Health and Human Services said the decision to eliminate beds was to “ensure fiscal prudence.” Last month, Jonathan Hayes, director of the department’s Office of Refugee Resettlement, said the facility was costing $720,000 a day to run even when no children were left there.

In a letter to Congress, the administration informed lawmakers that the facility was transitioning to “warm status” with no beds but will retain access to the site in case the number of child migrants rises.

A court filing earlier this year alleged the government was holding migrant children in “prison-like conditions” for months, allowing limited phone calls and ordering them to follow strict rules or face prolonged detention.

The facility underwent a massive expansion from 1,350 to 2,350 beds as the year began. In April, federal officials announced the capacity was growing to hold 3,200 children because of a surge of migrants crossing the U.S.-Mexico border.

Democratic presidential hopefuls turned the Miami-area facility into a campaign stop this summer, when about 2,500 teens were held there. They attacked the administration for holding children in a cramped detention center run by a private company tied to former White House Chief of Staff John Kelly.

As Homeland Security secretary, Kelly first revealed the U.S. government was considering separating families who were migrating to deter others considering traveling north.

Officials say the Florida facility housed as many as 140 children who were separated from their parents last year.

Three months after leaving the Trump administration in January, Kelly was spotted by protesters touring the facility east of the Everglades in a golf cart. Authorities confirmed he had visited the site on April 4, on behalf of Caliburn International Corp., which owns the contractor Comprehensive Health Services. Five days later, that company was awarded a no-bid contract for $341 million citing an immediate need to increase bed capacity.

The company later publicly announced Kelly had joined the board. The year before Kelly joined the Trump administration, he sat on the board of the Washington private equity firm DC Capital Partners, which bought Comprehensive Health Services and founded Caliburn by consolidating CHS and three other companies.

Caliburn has in its executive suite a high-ranking military officer who advised President Donald Trump in his first months in office and a former Department of Defense principal deputy inspector general.

U.S. Rep. Debbie Mucarsel-Powell, the Democratic lawmaker who represents the district encompassing the site, invited the field of 2020 Democratic candidates to visit the facility. Along with other lawmakers, Mucarsel-Powell has pressed a government watchdog agency to investigate Kelly’s role in the contracting negotiations.

“Caliburn will no longer receive millions of dollars to operate an empty facility,” Mucarsel-Powell said. “Given Caliburn’s poor record of child abuse and neglect, as well as the sheer number of former administration officials now serving on Caliburn’s board, this is a good first step towards ending one of many corrupt practices this Administration has executed.