In a riveting appearance on Capitol Hill, Fiona Hill also implored Republican lawmakers – and implicitly Trump himself – to stop peddling a “fictional narrative” at the center of the impeachment probe. She said baseless suggestions that Ukraine interfered in the 2016 election bolster Russia as it seeks to sow political divisions in the United States. 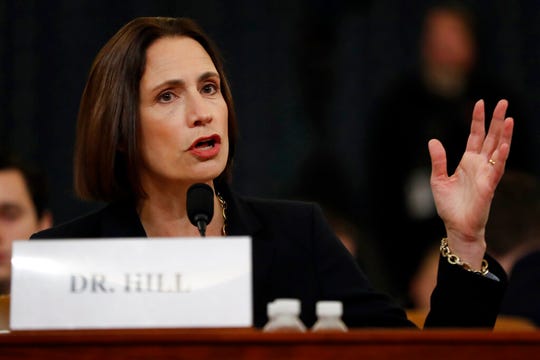 Testimony from Hill and David Holmes, a State Department adviser in Kyiv, capped an intense week in the historic inquiry and reinforced the central complaint: that Trump used his leverage over Ukraine, a young Eastern European democracy facing Russian aggression, to pursue political investigations. His alleged actions set off alarms across the U.S. national security and foreign policy apparatus.

Hill had a front row seat to some of Trump’s pursuits with Ukraine during her tenure at the White House. She testified in detail about her interactions with Gordon Sondland, saying she initially suspected the U.S. ambassador to the European Union was overstating his authority to push Ukraine to launch investigations into Democrats. But she says she now understands he was acting on instructions Trump sent through his personal attorney Rudy Giuliani.

“He was being involved in a domestic political errand, and we were being involved in national security foreign policy,” she testified in a daylong encounter with lawmakers. “And those two things had just diverged.”

David Holmes, a career diplomat and the political counselor at the U.S. Embassy in Ukraine (Photo: Jose Luis Magana, AP)

It was just one instance in which Hill, as well as Holmes, undercut the arguments being made by Republicans and the White House. Both told House investigators it was abundantly clear Giuliani was seeking political investigations of Democrats and Joe Biden in Ukraine, knocking down assertions from earlier witnesses who said they didn’t realize the purpose of the lawyer’s pursuits. Trump has also said he was simply focused on rooting out corruption in Ukraine.

Giuliani “was clearly pushing forward issues and ideas that would, you know, probably come back to haunt us and in fact,” Hill testified. “I think that’s where we are today.”

Hill also defended Lt. Col. Alexander Vindman, the Army officer who testified earlier and whom Trump’s allies tried to discredit. A previous witness said Hill raised concerns about Vindman, but she said those worries centered only on whether he had the “political antenna” for the situation at the White House.

The landmark House impeachment inquiry was sparked by a July 25 phone call, in which Trump asked Ukraine President Volodymyr Zelenskiy for investigations into Biden and the Democratic National Committee. A still-anonymous whistleblower’s official government complaint about that call led the House to launch the current probe.

After two weeks of public testimony, many Democrats believe they have enough evidence to begin writing articles of impeachment. Working under the assumption that Trump will be impeached by the House, White House officials and a small group of GOP senators met Thursday to discuss the possibility of a two week Senate trial.

There still remain questions about whether there will be additional House testimony, either in public session or behind closed doors, including from high-profile officials such as former Trump national security adviser John Bolton.

In what was seen as a nudge to Bolton, her former boss, Hill said those with information have a “moral obligation to provide it.”

She recounted one vivid incident at the White House where Bolton told her he didn’t want to be involved in any “drug deal” that Sondland and Trump’s acting White House chief of staff Mick Mulvaney were cooking up over the Ukrainian investigations Trump wanted. Hill said she conveyed similar concerns directly to Sondland.

“And I did say to him, ‘Ambassador Sondland, Gordon, I think this is all going to blow up,’” she said. “And here we are.”

Hill and Holmes both filled in gaps in previous testimony and poked holes in the accounts of other witnesses. They were particularly adamant that efforts by Trump and Giuliani to investigate the Burisma gas company were well-known by officials working on Ukraine to be the equivalent of probing the Bidens. That runs counter to earlier testimony from Sondland and Kurt Volker, the former Ukraine special envoy, who insisted they had no idea there was a connection.

Holmes, a late addition to the schedule, also undercut some of Sondland’s recollections about an extraordinary phone call between the ambassador and Trump on July 26, the day after the president’s call with Ukraine. Holmes was having lunch with Sondland in Kyiv and said he could overhear Trump ask about “investigations” during a “colorful” conversation.

After the phone call, Holmes said Sondland told him Trump didn’t care about Ukraine but rather about “big stuff,” meaning the “Biden investigation.” Sondland said he didn’t recall raising the Bidens.

During Thursday’s testimony, the president tweeted that while his own hearing is “great” he’s never been able to understand another person’s conversation that wasn’t on speaker. “Try it,” he suggested.

Republicans continued to mount a vigorous defense of Trump. And the top Republican on the panel was undeterred by Hill’s warnings about advancing “fictions” on Ukraine. GOP Rep. Devin Nunes of California said Russian interference in the 2016 election didn’t preclude Ukraine from also trying to swing the election to stop Trump’s presidency.

“That is the Democrats’ pitiful legacy,” Nunes. He called it all part of the same effort, from “the Russia hoax” to the “shoddy sequel” of the impeachment inquiry.

Hill, the British-born coal miner’s daughter who became a U.S. citizen in 2002, left the White House before the July phone call that sparked the impeachment probe. She worked for both Republican and Democratic administrations and said she joined the Trump White House because she shared the president’s belief that relations with Russia needed to improve.

Still, she was adamant that Russia is gearing up to intervene again in the 2020 U.S. election, declaring: “We are running out of time to stop them.”

She warned that political chaos in Washington plays into Moscow’s hands.

“This is exactly what the Russian government was hoping for,” Hill said. “They would pit one side of our electorate against the others.”