‘Mocked’ by her bosses, award-winning CBS TV reporter was fired. Then she sued

‘Mocked’ by her bosses, award-winning CBS TV reporter was fired. Then she sued

One of South Florida’s most recognizable TV personalities, Gillen worked at CBS-owned WFOR-TV Channel 4 for two decades – earning 25 prestigious regional Emmy Awards. She exposed inhumane treatment of mentally ill inmates in the Miami-Dade jail, leading to reforms. Earlier in her career, when Gillen was an NBC News correspondent in her native New York, her coverage prompted the government to create mammography machine standards. 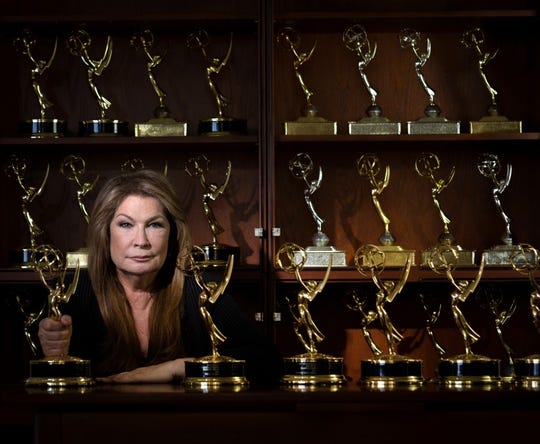 Michele Gillen was a well-known investigative reporter in Florida but was fired from CBS-owned station WFOR-TV Channel 4 in 2016. (Photo: Candace West/For The Times)

“She was an excellent reporter,” recalled former CBS executive Steve Mauldin, who led CBS’ stations in Los Angeles, Dallas and Miami. “I once sent her to Europe to cover some big story, I think it was the pope.”

But Gillen’s distinguished career fell apart in September 2016, when she was forced out of WFOR, which lags in Nielsen ratings. The journalist, now 64, filed an age and gender discrimination lawsuit against CBS last year, alleging the company also retaliated against her.

Attorneys representing Gillen and CBS reached a tentative agreement in late November, just two weeks before a trial that could have raised questions about the workplace culture at CBS and how the company handles complaints from its veteran TV station employees. The company continues to deny Gillen’s claims.

CBS, in court documents, said it was justified in firing the veteran reporter because she wasn’t keeping up with the two men on WFOR’s special projects team. In a court deposition, WFOR general manager Adam Levy said: “Michele was the least productive and the highest paid. So … I decided to eliminate Michele’s position.”

But Gillen traces the unraveling of her career to a July 2014 staff meeting at the CBS-owned station, which is tucked in an industrial park not far from the Trump National Doral Golf Club. Then-WFOR special projects producer Caridad Hernandez-Wood had called the meeting to urge her team to generate stories with tangential ties to CBS’ prime-time shows.

According to Gillen’s lawsuit, reporter Jim DeFede said he wasn’t interested in pursuing stories that would appeal to “women (who) are menstruating while watching ‘Blue Bloods,’ “ a reference to a CBS network show starring Tom Selleck. (DeFede did not respond to requests for comment.)

DeFede then tore into Gillen, the station’s chief investigative reporter, suggesting that she was to blame for the group being asked to contribute more stories because she had been on the air infrequently, according to interviews with witnesses of the incident and court documents.

“I watched one colleague cannibalize another: chew her up, spit her out, and chomp on her some more, without the benefit of any management protection,” former WFOR producer Jilda Unruh wrote in a memo that described the incident. The memo became part of the court record. In a September court deposition, DeFede acknowledged that he may have stepped out of line. “It wasn’t the best way to handle the situation,” DeFede said.

CBS, in court documents, said it launched an investigation into the incident, and the station manager and an HR official interviewed the special projects producer and the men who were present.

Unruh, who has since left the station, questioned the thoroughness of the investigation. In an interview with The Times, Unruh said she was troubled that no one talked to her and so she asked a CBS HR executive in New York about the oversight.

She said the HR executive told her: “What are we supposed to do? Interview everyone?” But there were only six people in the meeting.

“They interviewed everyone except for the one woman who could back up Michele’s account,” Unruh said.

Gillen said after that meeting, she found it increasingly difficult to be productive in the newsroom that she felt was hostile to her. In court documents, managers acknowledged the tensions. For years, WFOR producers had been frustrated by Gillen’s labor-intensive reporting methods, which they felt were out-of-date amid the relentless cost-cutting in local TV news. In an interview with the Times earlier this year, Gillen described her bosses mocking her, telling her she didn’t work at “60 Minutes,” the network’s vaunted news magazine.

“The culture of demeaning women was so rampant,” Gillen said. “The men are empowered, bad-boy behavior is protected, but the women are held to a different standard.”

Gillen’s former colleagues corroborated her account. Cameraman Wilfred Ardley, who still works at the station, filed his own discrimination lawsuit against CBS in 2017, describing what he called a hostile workplace.

Ardley alleged that co-workers lobbed racist insults at him because he was Muslim and an African American. His suit has since been settled, and CBS denied liability. The suit also cited an incident in which a supervisor allegedly disparaged Gillen, telling Ardley: “I can’t stand that old bitch(,) make her work.”

“Like I was some farm animal,” Gillen said. (The manager, in a court deposition, denied making such disparaging remarks.)

In her final years at the station, Gillen said she reported several instances of unequal treatment to CBS’ human resources division. When she complained to the HR director in Miami, Gillen said she was told: “We must rely on the man upstairs” (God) for help, according to her suit.

An HR executive in New York told her she didn’t have grounds to complain about discrimination because WFOR’s news director was a woman. Another time, Gillen said, the HR executive told her: “Favoritism is not illegal.”

Even three years later, it’s difficult for Gillen, a woman who was the valedictorian of her college class and a former network correspondent, to accept her unceremonious departure.

“I spent so much of my career trying to bring voices to the people who weren’t being heard,” Gillen said. “I couldn’t envision leaving with my tail between my legs. At the end of the day, it is about respect.”