The South Carolina Department of Natural Resources posted an alert about the devices on Dec. 27, and revealed they’re being attached as part of a joint study with Clemson University. 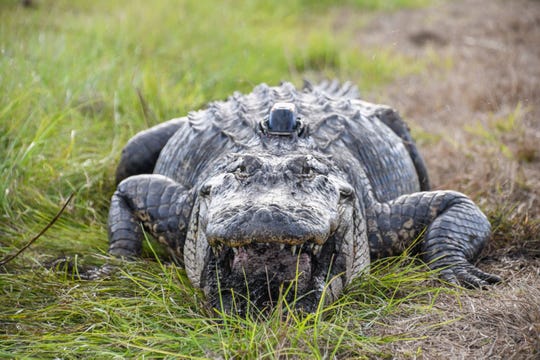 The South Carolina Department of Natural Resources posted an alert about GPS trackers resembling little black hats on the heads of local alligators on Dec. 27, 2019, and revealed they're being attached as part of a joint study with Clemson University. The number of alligators involved was not released. (Photo: S.C. DEPARTMENT OF NATURAL RESOU, TNS)

“That data will allow researchers to understand where these animals are spending their time and gain a better understanding of their habitat use over multiple seasons,” state officials wrote on Facebook.

Multiple people who have seen the state’s photos of the trackers have noted they look a bit comical attached to predators with 80-100 teeth.

“When I first saw this post, I swear I thought this gator had a mini top hat on … Now I can’t unsee it!” Shaun Dumont wrote on the wildlife department’s Facebook page.

State officials didn’t explain how the devices are attached, but suggested it’s not painful. They also noted the gadgets are stuck on the gators’ upper backs, not their heads, so any resemblance to a hat is coincidental.