Greenbelt, Md. – A former Maryland state lawmaker was sentenced Friday to six months in prison followed by two months of home detention for misusing campaign funds for her personal benefit.

Tawanna Gaines, a Democrat who had served in the Maryland House of Delegates since 2001, also must pay $22,565 in restitution.

Gaines, 67, of Berwyn Heights, pleaded guilty in October to one count of wire fraud. She faced a maximum sentence of 20 years in prison, but federal sentencing guidelines called for a range of eight to 14 months. U.S. District Judge Theodore Chuang wasn’t bound by those guidelines when he sentenced Gaines, who must report to prison by Feb. 24. 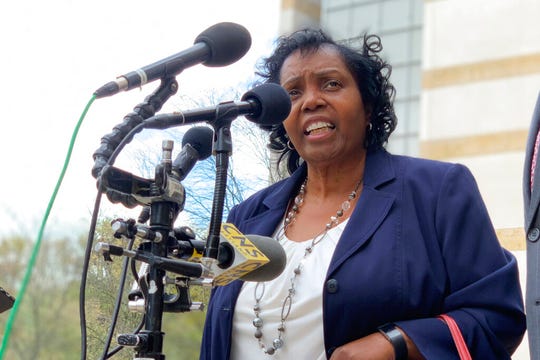 In this Oct. 17, 2019 file photo, Tawanna Gaines, a former Maryland delegate, speaks outside of the U.S. District Courthouse in Greenbelt, Md., after pleading guilty to one count of wire fraud. (Photo: Bryan P. Sears, AP, File)

Gaines told the judge that she didn’t want other public officials to be judged by her actions.

“I took my oath very seriously, but I fell short,” she said.

The judge said the prison sentence reflects a need to deter others, particularly public officials, from engaging in “this type of corrupt behavior.” He called her crime a “lapse in judgment” in an otherwise law-abiding career.

“It may not have seemed like a big deal at the time, but it undermines our citizens’ faith in their democracy,” Chuang said.

Assistant U.S. Attorney Thomas Windom has said Gaines spent campaign money on personal expenses including fast food, hair styling, dental work, a cover for her swimming pool and an Amazon Prime membership. The prosecutor, who recommended an eight-month prison sentence, said Gaines made more than 200 illegal withdrawals of money over three years, but it added up to a relatively modest amount.

“There doesn’t appear to be a reason for it,” he said. “The defendant does not lead an extravagant lifestyle.”

Gaines resigned days before she was charged in a criminal information. The Oct. 7 court filing accused Gaines of defrauding her campaign and its contributors out of more than $22,000.

Since June 2002, Gaines had used a campaign committee called “Friends of Tawanna P. Gaines” to raise money for her political campaigns. It was a regulated state election campaign committee with a designated bank account. Separately, Gaines controlled a PayPal account for donations that weren’t disclosed in state campaign finance filings, a court filing said.

“She has always been a dedicated public servant,” he said. “She was not out for personal political gain.”

Gaines’ daughter and former campaign treasurer, Anitra Edmond, pleaded guilty in November to a related charge of wire fraud. Edmond is scheduled to be sentenced on Feb. 24. Edmond also took campaign funds for her personal use and failed to disclose contributions on state campaign finance reports, according to a court filing.

House Speaker Adrienne Jones told The Associated Press on Thursday that a measure banning a family member from serving as a legislative candidate’s campaign treasurer will be introduced.

Before the sentencing hearing, Gaines’ attorney submitted more than a dozen “character letters” from her supporters, including Jones. “I have always admired the way that, as important as her political life was, her family was always of paramount importance,” Jones wrote.

Gaines’ case marked the latest in a string of criminal charges against current or former state legislators in Maryland in recent years.

Former Sen. Nathaniel Oaks, a Democrat, pleaded guilty in 2018 to two federal counts of fraud for accepting $15,300 in bribes.