Central Islip, N.Y. – A county on Long Island has launched an internal probe of its social services department after an 8-year-old boy died of hypothermia while in the custody of his father, a New York Police Department officer.

Suffolk County Executive Steve Bellone said Monday evening that a committee will examine how the department dealt with abuse allegations against Michael Valva, 40, and his fiancee, Angela Pollina, 42, concerning the six children who lived with them, Newsday reported. 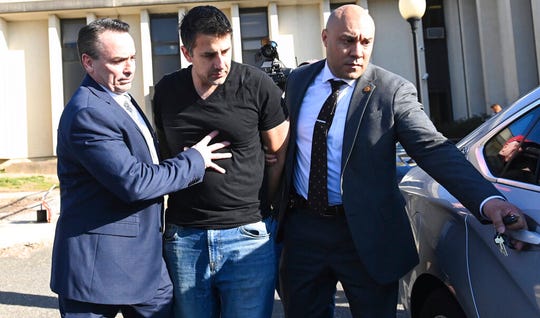 In this Jan. 24, 2020 photo, Michael Valva is led out of Yaphank police headquarters in Yaphank, N.Y. Valva is charged with second-degree murder in the death of his 8-year-old son, Thomas Valva, in Center Moriches, N.Y. It is alleged that the boy was forced to sleep in an unheated garage at the couple's home as temperatures dropped to under 20 degrees. (Photo: James Carbone, AP)

They were charged last week with second-degree murder in the death of one of those children, 8-year-old Thomas Valva.

It is alleged that the boy was forced to sleep in an unheated garage at the couple’s home as temperatures dropped to under 20 degrees (minus 6 Celsius).

This Jan. 24, 2020 photo provided by the Suffolk County Sheriff's Office, shows Angela Pollina who is charged with second-degree murder in the death of 8-year-old Thomas Valva in Center Moriches, N.Y. (Photo: AP)

“As a parent, I am horrified by what happened to this beautiful boy,” Bellone said. “As county executive, I want to know if there is anything else that could have been done under existing law to prevent this from happening. Beyond that, I want to know if anything in this case suggests that changes should be made to existing policy or law.”

Valva and Pollina appeared on Monday in Suffolk County Family Court, where their attorneys issued denials – similar to a not guilty plea in criminal court.

Assistant District Attorney Laura Newcombe said at an arraignment on Friday that audio files recovered from the couple’s Center Moriches home recorded the couple discussing the fact that Thomas was suffering from hypothermia, had been washed with cold water, couldn’t walk and was “face-planting” on the concrete.

Pollina’s attorney, Matthew Tuohy, told the New York Post that she loved Thomas, was kind to him and was not involved in his Jan. 17 death.

Thomas’ brothers, ages 10 and 6, have been placed in the custody of their mother, Justyna Zubko-Valva.

“They are happy with their mother,” said Gary Rosenthal, counsel for the social services department. They’re thriving. They have an abundance of food now.”

Pollina’s daughters were placed in the custody of their biological fathers.

Thomas Valva’s funeral will be held on Thursday in Melville.

On Monday night, a standing-room-only crowd held candles, sang hymns and prayed in his memory at a church in Center Moriches.