Misconduct and ethical lapses among U.S. special forces stem from a culture that puts too much emphasis on fighting an in-depth review has concluded

Washington – Episodic misconduct and ethical lapses among U.S. special operations forces, like the Navy SEALs and Army Green Berets, stem from a culture that puts too much emphasis on fighting and too little on developing good leaders, an in-depth review has concluded.

This imbalance has evolved from two decades of nearly continuous combat and has produced “potential cracks” in the foundation of the forces, the report released Tuesday said.

The report offers an unusually pointed look at shortcomings in a segment of the U.S. military that is known for daring missions like the raids that killed Osama bin Laden in Pakistan in 2011 and Islamic State group founder Abu Bakr al-Baghdadi in Syria last October.

A number of recent cases of alleged misconduct have raised deep concern and marred the record of the special operations forces, which also include Delta Force commandos, as well as Air Force and Marine special operations troops. They are called on often for high-risk operations because of their elite training and agility.

An Army Green Beret was facing trial last December for allegedly killing a suspected bomb-maker during a 2010 deployment to Afghanistan. But in November, Trump pardoned Maj. Mathew Golsteyn, saying he had been treated unfairly. 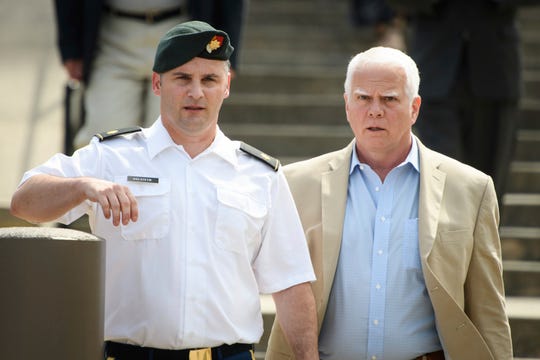 Last May, Navy SEAL Adam Matthews was sentenced to one year in military prison for his role in the 2017 hazing-related death of an Army Green Beret in Africa. And in July, a Navy SEAL platoon in Iraq was ordered home amid charges of drinking and an alleged sexual assault, and two senior leaders were fired.

Also last summer, a military jury acquitted a Navy SEAL of murder charges involving the death of a wounded prisoner in Iraq in 2017. That SEAL, Chief Petty Officer Edward Gallagher, was found guilty of posing for a picture with the corpse. But Trump ordered Gallagher’s rank restored and ordered the Navy to end a review to see if he should lose his SEAL status.

The review released Tuesday concluded that while there is no “systemic ethics problem,” the sustained war tours since the terrorist attacks of Sept. 11, 2001, and limited time for force development have set the conditions at times for unacceptable conduct. It acknowledged that previous internal assessments have come to similar conclusions, yet the problems persist.

“We did find that certain aspects of our culture have, at times, set conditions favorable for inappropriate behavior,” Army Gen. Richard Clarke, commander of U.S. Special Operations Command, told reporters at the Pentagon. “We have a ‘can do’ culture with a bias toward action.” This is “part of what makes us great,” he said, but sometimes it goes too far.

The report said that over time, deployment to areas that promise combat has come to be valued “above all other things.” Those who experience combat “are held as almost an infallible standard bearer” for others to emulate – even if that combat experience is marred by unprofessional acts.

“Nearly 20 years of continuous conflict have imbalanced that culture to favor force employment and mission accomplishment over the routine activities that ensure leadership, accountability and discipline,” Clarke said Tuesday. “This is a problem, and our review team recommended more than a dozen ways to address it. Most importantly, we need to improve our leader development programs and improve accountability in our training and management processes.”

The review left no doubt that the force has suffered from lapses in leadership and accountability. It said this evolved from an imbalance between the demands to deploy to war zones and the need to properly develop troops. The result was a “vicious cycle” that normalized a culture in which leadership development was lacking.

“The review team uncovered not only potential cracks in the SOF (special operations forces) foundations at the individual and team level, but also through the chain of command, specifically in the core tenets of leadership, discipline and accountability,” the report said.

The special operations forces must restore emphasis on developing leaders “with the required balance of character and competence,” it added.

Clarke ordered the ethics review of his commando forces last August, instructing that it look at how the military recruits and advances special operations forces. At the time, he wrote that recent incidents had “called our culture and ethics into question and threaten the trust placed in us.” More broadly, Defense Secretary Mark Esper has ordered the Pentagon’s legal office to do a separate review on how the military educates and trains service members on wartime ethics and the laws of armed conflict.