The U.S. rep alleges as many as 200 travelers with links to Iran were detained as they crossed the border from Canada into Washington state

Seattle – A U.S. congresswoman was working Thursday to verify a document showing that despite agency denials, Customs and Border Protection agents were ordered to detain Iranian and Iranian-American travelers at the U.S.-Canada border in Washington state early this month.

As many as 200 travelers with links to Iran were detained for as long as 12 hours as they crossed the border from Canada into Washington state the weekend of Jan. 5-6, following a U.S. drone strike that killed a top Iranian general, according to U.S. Rep. Pramila Jayapal, who is trying to authenticate the document. 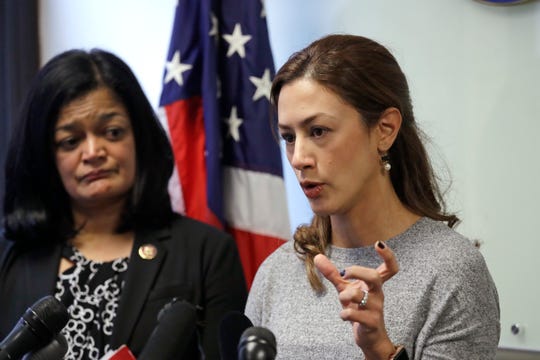 Rep. Pramila Jayapal, D-Wash., left, looks on as Negah Hekmati speaks about her hours-long delay returning to the U.S. from Canada with her family days earlier, at a news conference Monday, Jan. 6, 2020, in Seattle. (Photo: Elaine Thompson, AP)

Many of those detained were U.S. citizens and some had even been cleared to participate in a program for trusted travelers.

CBP said at the time it had not targeted Iranian-Americans based on their country of origin or issued any such directive to its officers.

But Len Saunders, an immigration attorney in Blaine, Washington, said an anonymous source on Wednesday provided him a copy of a directive apparently issued by CBP’s Seattle field office that said agents should “conduct vetting” on Iranian, Lebanese and Palestinian nationals born between 1961 and 2001. It also said anyone else who had traveled to Iran or Lebanon should be screened.

The document was first reported by The Northern Light, a community newspaper in Blaine.

Border agents typically have discretion to refer a traveler for additional inspection, such as when their paperwork is not in order or if something raises the agent’s suspicion. But immigrant rights groups and lawmakers said singling out Iranian-Americans absent such factors was wrong and violated their right to equal protection under the law.

In a letter Jan. 7, Jayapal asked the Trump administration to produce within two weeks any directives or other guidance regarding the screening of people with Iranian heritage. The administration did not meet that deadline, she said, but it provided a telephone briefing last week indicating such guidance had been issued.

The document “matches exactly the process described by CBP leadership in a briefing last week, our own sources inside CBP, and the credible and powerful accounts from travelers who faced extreme profiling at the U.S.-Canada border,” Jayapal, a Seattle Democrat, said in a statement Thursday.

In an email, Jason Givens, a spokesman in the CBP Seattle field office, declined to comment on the document’s authenticity. The agency added in a statement that the matter is under investigation.

As reports of Iranian-Americans being held up at the border spread on social media and in news reports on Jan. 6, CBP spokesman Michael Friel issued a statement saying, “Social media posts that CBP is detaining Iranian-Americans and refusing their entry into the U.S. because of their country of origin are false. Reports that DHS/CBP has issued a related directive are also false.”

The agency said it was operating with an “enhanced security posture” after Suleimani’s killing.

Saunders told The Associated Press he did not know who provided him the document. A man in a sweatshirt walked into the office around noon on Wednesday and left it with his legal assistant in an unmarked white envelope, he said.

“I opened it up, and I was like, ‘This is a smoking gun,’” Saunders said. “I’ve been doing this for 20 years in Blaine. For someone to come into my office anonymously and drop off evidence – it’s unheard of. It shows how unhappy the officers are at having to do this.”

Hugh Handeyside, senior staff attorney with the ACLU’s National Security Project, said the document appeared to show that CBP had been “caught in a lie.”

“It appears the agency did, in fact, wrongly direct officers to target and detain travelers based on national origin, and interrogate them about their religion and beliefs,” Handyside said. “There is simply no justification for these CBP practices against travelers who present no security concern. The agency should immediately withdraw this directive, if genuine, and Congress should investigate and prevent these abuses.”