Houston – A 5-year-old boy from Guatemala who fractured his skull in an accident and suffered bleeding around his brain is not being properly treated at an immigration detention center in Texas for what could be a traumatic brain injury, family members and advocates have alleged.

The child, his parents, and his 1-year-old brother were detained by U.S. Immigration and Customs Enforcement in January, about a month after the boy fell out of a shopping cart. The children and their mother are in custody at the family detention center at Dilley, Texas, where the 5-year-old continues to have headaches and complains when he hears normal levels of sound, according to his aunt and Dr. Amy Cohen, an advocate and doctor working with the family. 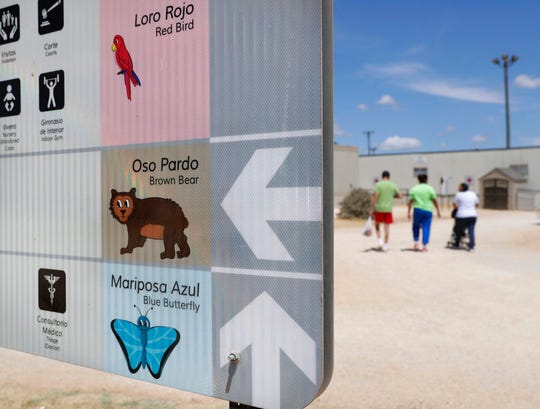 In this Aug. 23, 2019 file photo, a map using English, Spanish and photos is seen at the ICE South Texas Family Residential Center in Dilley, Texas. A 5-year-old boy from Guatemala who fractured his skull and suffered bleeding around his brain in an accident before entering the ICE South Texas Family Residential Center is not being properly treated for what could be a traumatic brain injury, according to family members and advocates. (Photo: Eric Gay, AP, File)

ICE said Wednesday that multiple neurological exams conducted at Dilley revealed no medical issues but that the boy was hospitalized on Tuesday “for additional evaluation and imaging to rule out any concerns.”

Before they were detained during what the family thought was a routine check-in, the boy had been taken to the hospital and an appointment had been scheduled with a neurologist, Cohen said. He is wetting himself at night for the first time in years, his aunt said.

The Associated Press is withholding the names of the boy and his family because they fear imminent deportation to Guatemala, where the boy’s mother says she was threatened.

The mother has alleged that medical staff at Dilley told her the injury took place too long ago to be causing symptoms now, according to Cohen and the aunt. The mother is having him wear diapers intended for her younger child because he loses control of his bladder, the aunt said.

“She says they don’t pay much attention to her,” the aunt said. “They don’t let her explain to them that my nephew’s case is bad because of the accident that he had. They don’t give her the chance.”

The boy was hospitalized Tuesday afternoon, a day after the Associated Press first contacted ICE about the case.

In a statement, the agency said medical staff at Dilley conducted a neurological exam Tuesday that “did not reveal any issues, and the child denied any dizziness or visual changes.” ICE also said no medical issues were found when the boy underwent a routine exam on Jan. 23 or during a follow-up neurological exam on Jan. 27, when it says the mother reported her son “was eating and sleeping well and getting along well with peers.”

ICE did not say whether the boy remained hospitalized Wednesday or what the hospital found.

A 1-year-old child was detained at Dilley before she died of a hemorrhage, according to the law firm representing her mother, Yazmin Juarez. The attorneys allege Juarez’s daughter, Mariee, contracted a respiratory illness that was misdiagnosed and mistreated at Dilley.

The agency defends the medical care it provides at Dilley and its other detention centers and says medical care is available at all hours to detainees. But the Trump administration has been sharply criticized for its treatment of migrant children, including wide-scale family separations and packing families into cells well beyond their capacity with limited food and water.

At least six migrant children have died after being detained by U.S. agents since President Donald Trump took office.

“It’s astonishing to me that people are continuing to tolerate the physical conditions and the cruelty that children are being subjected to in detention,” said Cohen, executive director of the advocacy group Every Last One.

According to ICE, the boy’s mother was apprehended in May 2019 after crossing the U.S.-Mexico border without authorization. She was released and required to report to the agency monthly, but after she did not appear for an immigration court hearing in November, a judge ordered her removal from the U.S.

She was detained by ICE in January along with her husband and two children. Her husband is being held at a different facility in California, according to the boy’s aunt. ICE said the mother may soon be deported.

The agency says the mother did not mention her son’s head injury when they were detained on Jan. 21. Cohen and the boy’s aunt say the mother said she did report the injury that day.

The boy’s aunt and Cohen say they’re worried that his symptoms will quickly get worse.

“I fear for his immediate health and safety and for his long-term health and safety, because we know that traumatic brain injuries in children can have devastating consequences for the rest of their lives,” Cohen said.