DeVos, a Michigan native, is directly providing the scholarship to Janiyah, the Department of Education said Wednesday

Philadelphia — At his State of the Union address Tuesday, President Donald Trump singled out a Philadelphia fourth grader sitting in the audience and announced she was getting a scholarship so she could leave a “low-performing” school.

Criticizing Gov. Tom Wolf for vetoing legislation that would have expanded school-choice programs, Trump said the girl, Janiyah Davis, had been on a scholarship waiting list and announced that a scholarship “has become available, is going to you, and you will soon be heading to the school of your choice.”

The audience in the House chamber applauded as Janiyah stood with her mother, Stephanie Davis.

Trump didn’t say what school the girl attended or what school she wants to attend, nor did he explain the scholarship. It turns out Trump’s education secretary, Betsy DeVos, will be paying for it. 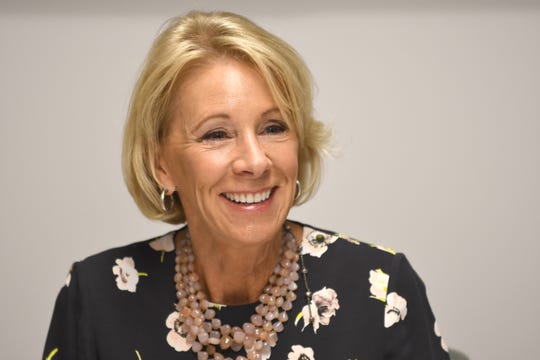 U.S. Secretary of Education Betsy DeVos addresses question from the Detroit News editorial board on Friday, Sep. 20, 2019, as part of her Back To School Tour. (Photo: Max Ortiz, The Detroit News)

DeVos, a Michigan native, is directly providing the scholarship to Janiyah, the Department of Education said Wednesday. In her personal capacity, the secretary donates her salary every year to various organizations, a department spokesperson said.

DeVos’ husband is former Amway CEO Dick DeVos. The couple’s net wealth has been estimated to be more than $1 billion.

On Wednesday morning, the Davises traveled aboard Air Force 2 with DeVos and Vice President Mike Pence as Pence visited Philadelphia. He mentioned Janiyah during his speech about school choice at a West Philadelphia school, although neither she nor her mother attended the event.

As education secretary, DeVos has proposed to create a $5 billion annual federal tax credit for donations to programs providing funding to students to attend private schools or other state-approved education.

Proponents of scholarship programs like the ones backed by the Trump administration and Pennsylvania Republicans say students should be able to receive funding to attend the schools of their choice.

Public education advocates have raised concern about drawing money away from and weakening the traditional public education system and exacerbating school segregation.

Wolf’s veto last year nixed what would have been a sweeping expansion of Pennsylvania’s largest tax-credit program though he has allowed smaller increases to the program in the budget.