Flowood, Miss. — Residents of Jackson braced Sunday for the possibility of catastrophic flooding in and around the Mississippi capital as the Pearl River rose precipitously after days of torrential rain.

Gov. Tate Reeves said the Pearl would continue to rise throughout the day, and he warned that the state faces a “precarious situation that can turn at any moment.” 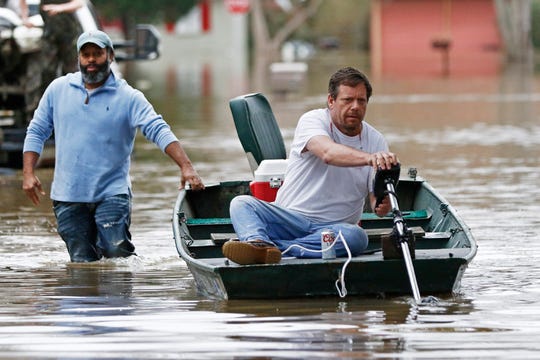 Rescuers performed four assisted evacuations Saturday, although they said none were needed overnight.

“We expect the river to continue to rise over the next 24 hours or so, “ Reeves said at a news conference in Jackson. “We are not out of the woods yet.”

In the suburb of Flowood, John and Jina Smith had packed up as much as they could and left their home as waters rose Thursday.

On Sunday, their neighbor Dale Frazier took them back to their house in a rowboat, where they checked on the damage, then got in their own canoe and rowed away.

“We’ve been able to stay in here when the water gets up,” John Smith said. “But as you’ve watched it over the years, you know when to get out. It’s time to get out this time.”

A foot and a half of water was inside his house, Smith said. He’d already been in touch with a contractor and insurance agent about rebuilding. Both he and his wife say they love their home, where they can sit on their back porch and watch deer and other wildlife

“It’s going to take a while for us to rebuild, but we are safe, and we’re all OK,” Jina Smith said.

On Frazier’s lot next door, the water was at the bottom of the driveway but had not crept inside the one-story house where he’s lived for 23 years.

“The water is very close to my house. It could flood; it could not flood. It depends on the crest right now,” he said.

Down the street, a Presbyterian church and several businesses were flooded.

The National Weather Service said Sunday on its Twitter feed that the river was expected to crest Monday in the Jackson area at 37.5 feet. That’s slightly down from the 38-foot crest that had been forecast for Sunday. The weather service said the river is currently at 36.42 feet in Jackson — its highest level since 1983.

On Saturday night, officials released water from the nearby Barnett Reservoir to control its levels. They urged residents in northeastern Jackson who live in the flood zone downstream from the reservoir to leave immediately.

By Sunday morning, Reeves said the reservoir’s inflow and outflow had equalized. Reservoir officials said in a statement later in the day that its water level had stabilized, allowing them to release less water than expected.

Once the river crests Monday, it will take the water three to four days to go down significantly.