With the coronavirus leaving many people out of work, food banks and pantries across the U.S. are scrambling to meet an expected surge in demand

Des Moines, Iowa – With the new coronavirus leaving many people at least temporarily out of work, food banks and pantries across the U.S. are scrambling to meet an expected surge in demand, even as older volunteers have been told to stay home and calls for social distancing have complicated efforts to package and distribute food.

Food banks have for years been increasing the amount of food they deliver to pantries that pass it along to needy people, but the economic upheaval caused by COVID-19 is expected to cause demand to skyrocket. Meeting the need would be tough enough, but the response has been complicated by a virus that requires people to avoid the kind of close interaction typical in food packaging and distribution. 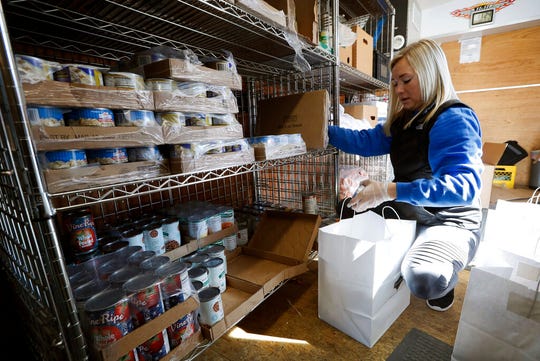 “We’re getting through it,” said Matt Unger, who heads the Des Moines Area Religious Council’s network of 14 pantries. “We’re going to do this as long as we can, as good as we can until we run out of adaptations.”

The virus has caused a reversal in how pantries provide food, shifting from letting people select items in what amount to mini-groceries to giving them a sack filled with food. Giving people control over what they select gives them dignity and reduces waste, but giving them pre-filled sacks enables quicker interactions with less chance of passing along the virus.

The sacks also require a lot more work by staff and volunteers who must sort and package items.

That extra work comes even as pantries tell their many older volunteers to stay away. They also are accepting help only from smaller groups, rather than the 50 or 60 people from churches or service clubs who typically join to offer a night or weekend of free help.

“Everyone needs to be spaced out with less interaction,” said Kelly Ptacek, the vice president for external affairs at Omaha, Nebraska-based Food Bank for the Heartland. “We’ve become less efficient as we pack those boxes, but I’ll take less efficient operations over no operations.”

For most people, the virus causes only mild or moderate symptoms, such as fever and cough. For some, especially older adults and people with existing health problems, it can cause more severe illness. Most people recover from the virus.

In the Seattle area, which leads the nation in coronavirus deaths, getting volunteers at all has been difficult. 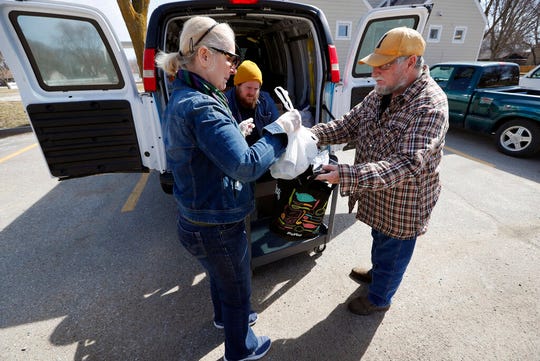 “Yeah, we’ve been seeing our clientele go up in the past week and our volunteers have been staying home because of the coronavirus and there has been actually less food as people have been hoarding,” said Stephen Kreins, operations manager at the Queen Anne Food Bank. “That hasn’t hit us as hard as the volunteers.”

If the need to change their operations is new, the demand to provide more food has become the norm in the past decade as even many people with full-time jobs struggle to cover expenses.

The Chicago-based group Feeding America, which provides groceries to 200 food banks across the country, last year distributed 4.9 billion pounds (2.2 billion kilograms) of food, more than twice as much as a decade before.

In the Des Moines area, that has translated to annual distribution increases of 8% or more year after year. Last year, the organization provided food to 55,745 people in a metropolitan area of about 650,000.

For Garry Vanderlinden, 69, of Des Moines, the new process means he had a little less choice when he stopped at a food pantry van parked in a senior center parking lot near his home. He was handed a plastic bag filled with canned fruit, meat and rice and was able to add some carrots, onions and sweet potatoes from separate boxes.

“I’m trying to do as little around people as possible so this is fine,” said Vanderlinden, adding that his wife, Linda, has some health conditions that make her more vulnerable to the virus. “This is just using common sense.”

Despite all the complications, Victoria Nguyen showed up to volunteer at the San Francisco Marin Food Bank, noting need was rising as businesses closed.

“There’s a lot of people who make minimum wage, so they’re going to need food for their families who are now no longer attending school or just not going to be able to make enough to get their family through this quarantine,” she said.