The border between Canada and the United States will soon temporarily close to "non-essential" traffic. The Detroit News

The United States and Canada are moving to temporarily close their shared border to "non-essential" traffic to slow the spread of the novel coronavirus, though trade and people who cross the boundary for work won't be affected, officials said.

It is unclear when the closure will begin affecting travelers and what kind of documentation workers will need to cross, as officials continued to sort out details.

The Detroit-Windsor Tunnel and Ambassador Bridge remained open as of Wednesday, as well as the Blue Water Bridge in Port Huron and the International Bridge in Sault Ste. Marie, with tunnel officials saying they were preparing for closure to "nonessential personnel, including regular travelers, as advised by the U.S. and Canadian governments."

►A map of Michigan cases

"Further clarification is expected in the near future on which workers are covered by this exemption and on the required documentation that will be needed," according to a statement released from the Detroit-Windsor Tunnel.

The Michigan Health & Hospital Association said it is working closely with the governor and federal partners to ensure health care workers would qualify as "essential" individuals under the new travel restrictions, and that they will be able to cross the border efficiently.

Roughly 2,600 Canadian nurses are licensed to work in Michigan, according to the Michigan Nurses Association.

President Donald Trump said on Twitter that the border closure was reached by "mutual consent." He later said he expected the closure to last 30 days.

"I would say 30 days, and hopefully at the end of 30 days, we'll be in great shape," he said in a White House briefing.

Trump said there was no "tipping point" that necessitated closure, but "we want to isolate from the standpoint we don't want people coming into contact."

"That is the way we are going to win this war. That is so important," he added. "It will not affect trade at all. It was something we thought would be good for both countries."

We will be, by mutual consent, temporarily closing our Northern Border with Canada to non-essential traffic. Trade will not be affected. Details to follow!

In remarks Wednesday morning, Canadian Prime Minister Justin Trudeau confirmed travelers will no longer be able to cross U.S.-Canada border for tourism and recreation. He urged people to stay home.

"Essential travel will continue. Our governments recognize that it's critical that we preserve supply chains between both countries. These supply chains ensure that food, fuel and life-saving medicines reach people on both sides of the border," said Trudeau, adding trucking would not be affected by the measure.

"Canadians and Americans cross the border every day to do essential work or for other urgent reasons. That will not be impacted."

Trudeau said he and Trump spoke Wednesday morning and stressed the importance of trade continuing to flow.

“These measures will last in place as long as we feel that they need to last,” Trudeau said of the new travel restrictions. "This is something we need to move forward on to protect Canadians.”

It was not clear when the new restrictions would take effect, but Trudeau said "it will be happening very soon."

"Understandably, lots of folks in Michigan have unanswered questions about what this means. I hope the administration will issue clearer communication very, very soon," she said on Twitter.

I’ve seen the President’s tweet about closing the northern border to non-essential traffic.

Understandably, lots of folks in Michigan have unanswered questions about what this means. I hope the administration will issue clearer communication very, very soon.

Shutting the border entirely would cause severe economic harm to both the U.S. and Canada. Canada relies on the U.S. for 75% of its exports. Much of Canada’s food supply comes from or via the states, and 98% of its oil exports go to the U.S.

The crossing between Detroit and Windsor is the busiest along the U.S.-Canada border, carrying more than 20% of all merchandise tradebetween the nations via the Ambassador Bridge and Detroit-Windsor Tunnel, as of 2015.

"We talked about exactly that this morning, President Trump and I, to ensure that indeed our economies and our people that are so interconnected in so many different ways, will be able to ensure the smooth flow of goods and essential materials and medication across the border," Trudeau said.

"That is something that we remain committed to. We will work in close collaboration on an ongoing basis to make sure that that continues." 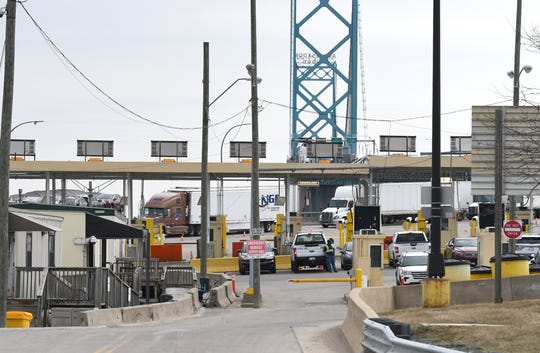 Michigan Sens. Gary Peter and Debbie Stabenow wrote to Trump on Tuesday about the hundreds of essential workers including health care professionals, first-responders, and agriculture and manufacturing workers who regularly cross the border.

"We recognize that extraordinary measures must be taken to guard against the spread of the virus and commend the efforts our Canadian partners are making to accomplish that goal," the senators wrote.

"At the same time, we must monitor for any unintended consequences that could hinder our health system's ability to respond to this crisis."

Michigan's House delegation raised similar concerns in a Wednesday letter to Vice President Mike Pence, head of the federal coronavirus task force, asking him to keep the border — especially that between Michigan and Ontario — open to health care workers and manufacturing supplies.

"An inability to cross the Michigan-Canada border each day or significant delays will cripple Michigan hospitals as well as other medical facilities," the members wrote.

"Any shortages in frontline health care workers that deliver critically needed services could be detrimental as we combat this public health emergency." 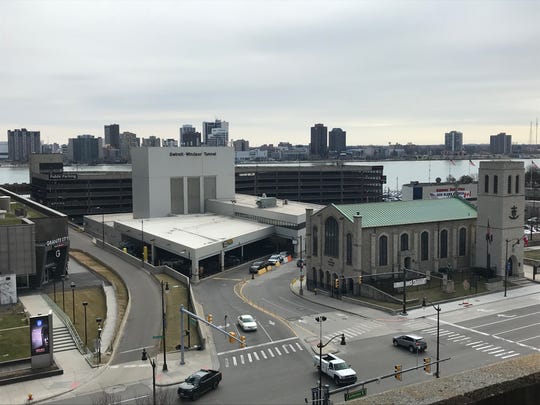 The Detroit-Windsor Tunnel from the Detroit side. President Donald Trump announced Wednesday that non-essential traffic would stop at the border crossing, but trade wouldn't be affected. (Photo: Andy Morrison, The Detroit News)

"We feel very confident based on the work of the Michigan congressional delegation and governor’s office that the right conversations have been had with our Canadian counterparts to make sure we don’t lose these valued health care workers," Irwin said.

"It’s in the interest of the U.S. and Canadian government to ensure people are safe and healthy. We are in absolute support of that. The processes by which the border professionals on each side of our borders pursue that — that still has to be shared with us," he added.

The new procedures for crossing to be worked out include whether employees will travel in their own vehicles, in a designated vehicle such as a shuttle, and whether and how any COVID-19 screenings will be conducted before crossing, Irwin said.

"Everybody has indicated they’re very willing to talk with us about those and work those through," he said.

Trudeau on Monday announced he was closing the country’s borders to anyone not a citizen, an American or a permanent resident. Those excepted groups have to self-isolate for two weeks upon arrival due to the pandemic.

Essential workers who cross the border regularly for work are exempt from the self-quarantine requirement.

British Columbia shares a border with Washington state — a hotspot for COVID-19 — and had been urging Trudeau to close the border there earlier.

Canadian Deputy Prime Minister Chrystia Freeland said the border is vital to the daily life to people on both sides.

“We get our groceries thanks to truckers who drive back and forth across that border.