Boris Johnson was in intensive care Tuesday, while Japan’s leader declared a monthlong state of emergency for Tokyo and six other regions 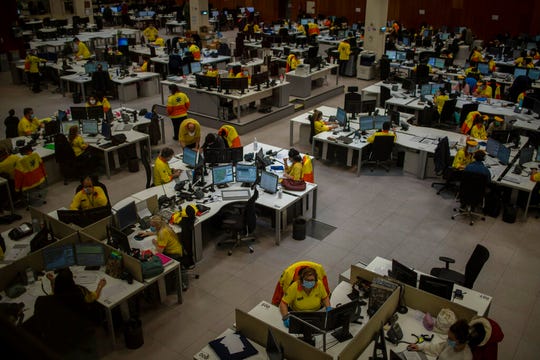 New York – New York City’s death toll from the coronavirus rose past 4,000 on Tuesday, eclipsing the number killed at the World Trade Center on 9/11. In Britain, Prime Minister Boris Johnson lay in intensive care, believed to be the first major world leader hospitalized with the virus.

The twin developments came even as the crisis seemed to be easing or at least stabilizing, by some measures, in New York and parts of Europe, though health officials warned people at nearly every turn not to let their guard down. After 76 days, China finally lifted the lockdown on Wuhan, the city of 11 million where the outbreak began.

COVID-19’s toll in New York City is now more than 1,000 deaths higher than that of the deadliest terror attack on U.S. soil, which killed 2,753 people in the city and 2,977 overall, when hijacked planes slammed into the twin towers, the Pentagon and a Pennsylvania field on Sept. 11, 2001.

“A lot of pain again today for many New Yorkers,” he said.

But in an encouraging sign, the governor said hospital admissions and the number of those receiving breathing tubes are dropping, indicating that measures taken to force people to keep their distance from one another are succeeding.

And alarming as the one-day increase in deaths might sound, the governor said that’s a “lagging indicator,” reflecting people who had been hospitalized before this week. Over the past several days, in fact, the number of deaths in New York appeared to be leveling off.

With service drastically reduced, essential workers are encountering some busy trains as they head to their jobs. Photos taken in Brooklyn showed riders sitting or standing within a few inches of each other, some not wearing face masks.

Across the U.S., the death toll topped 12,000, with around 380,000 confirmed infections. Some of the deadliest hot spots were Detroit, New Orleans and the New York metropolitan area, which includes parts of Long Island, New Jersey and Connecticut. New Jersey recorded over 1,200 dead, most of them in the northern counties where many residents commute into New York City.

In London, the 55-year-old Johnson was in stable condition and conscious at a hospital, where he was receiving oxygen but was not on a ventilator, officials said. Foreign Secretary Dominic Raab was designated to run the country in the meantime. 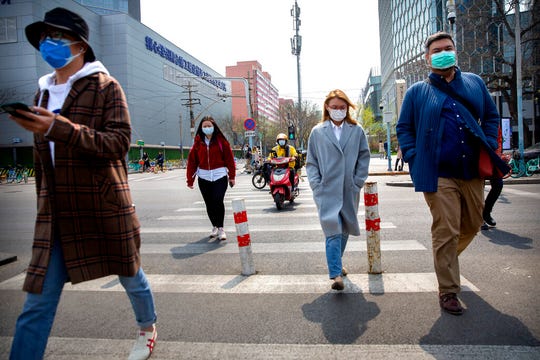 People wear face masks as they walk across an intersection in Beijing, Tuesday, April 7, 2020. China on Tuesday reported no new deaths from the coronavirus over the past 24 hours and just a few dozen new cases, all from people who returned from overseas. (Photo: Mark Schiefelbein, AP)

“For all of us in Cabinet, he is not just our boss. He’s also a colleague and he’s also our friend,” Raab said. “And I’m confident he’ll pull through because if there’s one thing I know about this prime minister, he’s a fighter.”

Deaths in Britain reached nearly 6,200, after a one-day increase of almost 800.

President Donald Trump trained his anger at the World Health Organization and threatened to freeze U.S. funding for it, saying the international group had “missed the call” on the pandemic and that it was “very China-centric.”

Throughout his presidency, Trump has voiced skepticism toward many international organizations and has repeatedly heaped scorn on the WHO. In its most recent budget proposal in February, his administration called for slashing the U.S. contribution to the WHO from an estimated $122.6 million to $57.9 million. 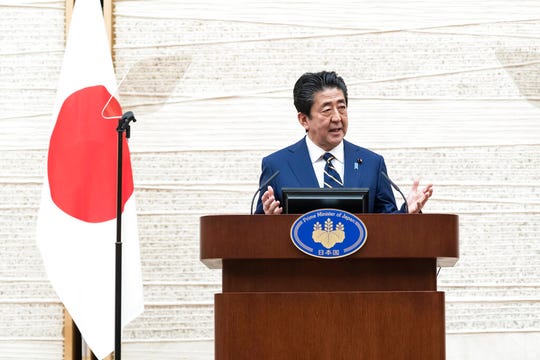 Japan's Prime Minister Shinzo Abe speaks during a press conference at the prime minister's official residence Tuesday, April 7, 2020, in Tokyo. Abe declared a state of emergency for Tokyo and six other prefectures to ramp up defenses against the spread of the coronavirus. (Photo: Tomohiro Ohsumi, AP)

Trump suggested the WHO had gone along with Beijing’s efforts months ago to minimize the severity of the outbreak. The WHO has praised China for its transparency on the virus, even though some public health experts regard the country’s figures with suspicion.

“They should have known and they probably did know,” Trump said of WHO officials.

On Wall Street, a strong rally propelled by signs that the outbreak may be leveling off in some of the hard-hit parts of the world evaporated after the price of crude oil suddenly fell. Stocks ended the day slightly lower.

Elsewhere around the globe, Chinese authorities ended the lockdown on Wuhan, allowing residents to travel in and out of the sprawling industrial city. Residents must use a cellphone app showing that they are healthy and have not been in recent contact with anyone confirmed to have the virus.

China, which officially recorded more than 82,000 infections and over 3,300 deaths, listed no new cases on Tuesday.

In Japan, Prime Minister Shinzo Abe declared a month-long state of emergency in Tokyo and six other prefectures because of a spike of infections in the country with the world’s oldest population. The order will close hostess bars and other night entertainment.

“My lifestyle will change. These are difficult times” said Yoshiyuki Kataoka, 44, a nightlife industry worker. “Maybe I’ll become a recluse.”

In some European hot spots, as in New York, authorities saw signs that the outbreak was turning a corner, based on slowdowns in new deaths and hospitalizations.

In Spain, new deaths Tuesday rose to 743 and infections climbed by 5,400 after five days of declines, but the increases were believed to reflect a weekend backlog. Authorities said they were confident in the downward trend.

In Italy, with over 16,500 deaths, authorities appealed to people ahead of Easter weekend not to lower their guard and to abide by a lockdown now in its fifth week, even as new cases dropped to a level not seen since the early weeks of the outbreak.

“Finally it seems we are beginning to see a lessening of new cases,” said Giovanni Rezza, director of the infectious-disease division of Italy’s national health institute.

In this combination of photos, the flag-draped remains of a Sept. 11 victim are carried by New York firefighters during a recovery operation March 8, 2002, left, and at right, a body is unloaded from a refrigerated truck in New York during the coronavirus outbreak on March 31, 2020. New York City's death toll from the coronavirus officially eclipsed the number of those killed at the World Trade Center on 9/11, health officials said Tuesday, April 7, 2020. (Photo: AP, File)

In France, the number of dead passed the bleak milestone of 10,000, climbing to more than 10,300, said Jerome Salomon, national health director.

“We are in the epidemic’s ascendant stage,” he said. “We have not yet reached the peak.” But he offered a glimpse of hope, saying the virus rate is ”slowing a little.”

U.S. Surgeon General Jerome Adams said that if Americans continue to practice social distancing for the rest of April, “we will be able to get back to some sense of normalcy.”

“I want the American people to know there is a light at the end of this tunnel, and we feel confident that if we keep doing the right thing for the rest of this month, that we can start to slowly reopen in some places,” he said on ABC’s “Good Morning America.”

One lockdown exception in the U.S. was Wisconsin, which asked hundreds of thousands of voters to ignore a stay-at-home order to participate in its presidential primary Tuesday.

Lines were particularly long in Milwaukee, the state’s largest city and a Democratic stronghold, where just five of 180 traditional polling places were open. Many voters across the state did not have facial coverings in line with public health recommendations.

Worldwide, about 1.4 million people have been confirmed infected and over 79,000 have died, according to Johns Hopkins University. The true numbers are almost certainly much higher, because of limited testing, different rules for counting the dead and deliberate underreporting by some governments.

For most people, the virus causes mild to moderate symptoms such as fever and cough. But for some, especially older adults and the infirm, it can cause pneumonia. About 300,000 people have recovered worldwide, by Johns Hopkins’ count.

One of the main models on the outbreak, from the University of Washington, is projecting about 82,000 U.S. deaths through early August, with the highest number on April 16.