This is how the Supreme Court embraces technology: Slowly

Washington – This is how the Supreme Court embraces technology. Slowly.

It took a worldwide pandemic for the court to agree to hear arguments over the telephone, with audio available live for the first time. C-SPAN plans to carry the arguments.

Just two years ago case filings were made available online, decades after other courts. Other forays into technology, including posting opinions online, have not always gone smoothly.

Chief Justice John Roberts acknowledged in 2014 that courts will always be cautious when it comes to embracing the “next big thing” in technology.

And even the decision to hold arguments via telephone is “sort of retro,” given much of the country and other courts are doing meetings and arguments using video conferencing, said Clare Cushman, the director of publications at the Supreme Court Historical Society. 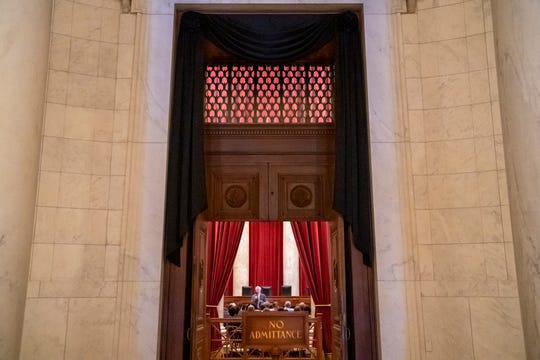 It's taken a worldwide pandemic for justices of the Supreme Court to agree to hear arguments over the telephone, with audio available live for the first time. The dramatic change is a product of efforts to slow the spread of the coronavirus. (Photo: J. Scott Applewhite, AP)

But the decision remains a “giant leap forward,” Cushman said, for a court that has shunned technology in favor of tradition. The court used an obsolete document delivery system, pneumatic tubes, until 1971. It was slow to add computers and late in transitioning from printing opinions in the court’s basement on Linotype machines, which used metal type, to electronic printing in the early 1980s.

Before the coronavirus outbreak, the justices circulated messages and opinion drafts on paper rather than by email.

Still, most of the nine justices – six of them over the age of 65 – seem perfectly comfortable with modern technology in their own lives. Justice Elena Kagan has said she is on Twitter, and Justice Samuel Alito has described reading briefs on an iPad. Justice Sonia Sotomayor wears an electronic sensor that monitors her diabetes. And Justices Neil Gorsuch and Brett Kavanaugh have teenage and pre-teen children who might be expected to text their fathers.

Even the court’s two oldest justices are somewhat tech savvy. This month, 81-year-old Justice Stephen Breyer used Zoom to talk to students at a New York school. His background: a picture of the court.

And 87-year-old Justice Ruth Bader Ginsburg has said she reads her email on an iPhone and uses an iPad, though not perhaps to its maximum advantage – she told an audience in 2016 that she uses the iPad as a sound machine to help her sleep.

The court has come a long way since 1993, when Justice Anthony Kennedy, now retired, marveled over a new device in his home and invited two colleagues who lived nearby to come use it.

“In my lower level office at home I have a FAX machine. The thing works 24 hours a day. You can use it to send and receive any time you like,” Kennedy wrote in a note now in the Library of Congress archives.

Still, the decision to hold 10 arguments in cases via telephone during six days in May and let the public listen in was unimaginable even two months ago.

The dramatic change is a product of efforts to slow the spread of the virus, recognize the reality that most of the justices are at risk because of their age and decide significant cases by the court’s traditional summer break.

This year, those cases include President Donald Trump’s effort to shield his tax and other financial records and whether presidential electors must cast their Electoral College ballots for their states’ winners.

Until now, argument sessions have looked the same, day after day, year after year. A buzzer sounds at 9:55 a.m. to signal the start of court is five minutes away. It rings again at 10 o’clock, followed by the crack of the marshal’s gavel. The justices emerge from behind a heavy red curtain, the marshal calls the court to order and everyone sits.

An hour or two of arguments ensue. When the last lawyer asks for a favorable ruling, Roberts says, “The case is submitted.” With that, the gavel cracks again, everyone stands and the justices disappear whence they came.

The new arrangement might be good for one month only, assuming the justices can return to courtroom arguments when their new term begins in October. But several advocates of greater transparency hope the justices will allow simultaneous broadcasting of arguments even after the pandemic is over.

“You can’t walk back these kinds of things,” New York University law professor Melissa Murray said, adding that live audio gives Americans the ability to monitor the third branch of government at work. “I don’t know why you wouldn’t want that.”

Audio should lead to ending the biggest technological taboo, allowing cameras into the courtroom, said Judge Stephen Dillard of the Georgia Court of Appeals, a vocal supporter of broad access to the courts.

“This is a great first step, and I’m excited about it, but I hope they will go further in years to come and allow live video streaming,” Dillard said.

The idea that yielding on live audio would inevitably lead to cameras has partly motivated the court’s resolute stance against it. Audio has been released days later – and that’s progress. Until 2010, the public had to wait months. Audio in big cases occasionally has been provided to broadcasters the same day as arguments since the Bush v. Gore case, which helped settle the 2000 presidential election.

Video of arguments seems like a non-starter. No justice is on record as backing cameras in the Supreme Court, and several have backtracked from their confirmation hearings when they said they were open to the idea. But neither has any current justice been as vehement as retired Justice David Souter, who said in 1996 that “the day you see a camera come into our courtroom, it’s going to roll over my dead body.”