As hundreds protest Wisconsin restrictions, some in GOP skip

The event was expected to be among the biggest of the protests, but one group was noticeably absent.

As hundreds protest Wisconsin restrictions, some in GOP skip

Madison, Wis. — The latest demonstration by right-wing groups against measures to contain the coronavirus came to Wisconsin on Friday, with hundreds of people ignoring social distancing recommendations and crowding together on the steps of the state Capitol to protest the Democratic governor’s stay-home order.

With the building closed, the protesters — some with banners supporting President Donald Trump — stood outside in chilly weather waving American flags or wearing them as masks and capes. Many carried signs criticizing Gov. Tony Evers and the stay-at-home order he issued that closed most nonessential businesses until May 26. 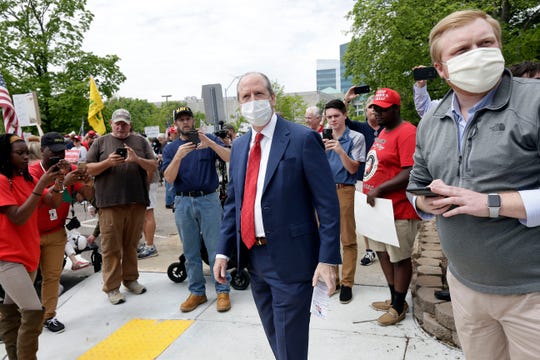 “We think there’s been a major overstep in our rights by our governor,” said Paris Procopis, one of the protesters. “We’re here to send Governor Evers a message. The solution is going to be more harmful than the virus itself.”

Some protesters wore masks or bandannas in accordance with recommendations of the Centers for Disease Control and Prevention. Many did not.

The event was expected to be among the biggest of the protests that have popped up around the U.S. in recent days. But as with some earlier events, one group was noticeably absent: the state’s most prominent Republicans.

That included Sen. Ron Johnson, a Trump ally, who was sheltering in place at home in Oshkosh about 90 miles from Madison.

“I’m neither encouraging nor discouraging them,” said Johnson, 65, whose career was launched by the tea party movement, a protest effort with ties to the current one.

Johnson’s distance and ambivalence is shared by many Republicans as they warily watch the protests — with their images of gun-toting activists, the occasional Confederate flag, and protesters wearing Trump hats but no face masks. Six months away from an election, the protests are forcing some Republicans to reckon with a restless right flank advocating an unpopular opinion even as the party seeks to make gains with moderates, women and suburban voters.

Polls show the sentiment behind these groups is unpopular. A survey by The Associated Press-NORC Center for Public Affairs Research found only 12% of Americans say the measures in place where they live to prevent the spread of the coronavirus go too far, though Republicans are roughly four times as likely as Democrats to say so — 22% to 5%. The majority of Americans — 61% — feel the steps taken by government officials in their area are about right.

Still, a network of conservative groups has activated to support the efforts — seizing on the anxiety and distrust that comes with a moment of turmoil. Conservative groups with national networks, including FreedomWorks and Tea Party Patriots, have pushed the “reopen” message on social media.

Friday’s rally was promoted by Thomas Leager, a prominent Wisconsin gun rights advocate. Those who are members of the Facebook group for the event or have advocated for rallying to reopen the state include Matt Batzel, executive director of the Wisconsin chapter for American Majority, a group that helps conservative candidates get elected; Christian Gomez, research project manager at the John Birch Society; and Stephen Moore, a former fellow at the conservative Heritage Foundation.

“The polls are very clear. That’s why I think Republicans are nervous about this,” said Moore, who is on Trump’s economic task force and has promoted some of the protests provided attendees follow social distancing guidelines. “But these things can change. That’s the point of these protests — to change public opinion.”

The many unknowns of the pandemic — including what the death toll might be if restrictions like stay-home orders were lifted — complicate the political calculations. And Trump himself has positioned himself on both sides of the divide in the party. After issuing guidelines for states to reopen, he tweeted support for protesters who were violating them, calling on them to “LIBERATE” three states with Democratic governors. He empathized with protesters, saying they have “cabin fever” and “want their lives back,” then criticized Georgia’s governor for reopening his state too early.

That’s left most Republicans — particularly those in tough reelection fights this fall — playing it safe by staying away from protests or from being overly vocal about reopening things.

In North Carolina, Sen. Thom Tillis, who is among the GOP senators whose elections could determine if the party keeps control of the Senate, has been repeatedly complimentary of Democratic Gov. Roy Cooper and his decisions.

“We need to let people know that now is not the time to let their guard down,” Tillis said on Thursday during a coronavirus conference call with constituents. He said he thinks one or two other states talking about reopening “may be doing it just a little bit too soon based on the data and the presidential guidelines.”

Wisconsin Republicans, who control the state’s Legislature, initially supported Evers’ approach to fighting the coronavirus, but they broke last week when he extended a stay-at-home order for another month, until May 26, which was the latest in the Midwest at the time and one of the latest in the country. This week, Republican legislative leaders asked the Wisconsin Supreme Court to block the order and force the state Department of Health Services to work with them on a new approach to reopening the state.

“There’s a lot of frustration out there,” said Republican state Assembly Speaker Robin Vos, who is among those who filed the lawsuit against Evers. “The fact that Governor Evers’ voicemail is full and people aren’t getting a reply to their emails makes people feel like they’re not being heard.”

Vos, who made headlines for declaring Wisconsin polling places safe for voters while covered in protective gear, would not say whether he will attend Friday’s rally. His counterpart in filing the lawsuit, state Senate Majority Leader Scott Fitzgerald — who is running for Congress — did not respond to requests for comment.