Many states fall short of mandate to track virus exposure

An Associated Press review found a patchwork of systems around the country for so-called contact tracing.

Many states fall short of mandate to track virus exposure

Atlanta — As more states push to reopen their economies, many are falling short on one of the federal government’s essential criteria for doing so — having an efficient system to track people who have been physically near a person infected with the coronavius.

An Associated Press review found a patchwork of systems around the country for so-called contact tracing, with many states unable to keep up with caseloads and scrambling to hire and train enough people to handle the task for the months ahead. The effort is far less than what public health experts say is needed to guard against a resurgence of the virus.

The result is a wide array of strategies and little national coordination. With few exceptions, most states reviewed by AP are going it alone. Many other countries dealing with the pandemic are taking a national approach to testing.

As late as Friday, the website for the Centers for Disease Control and Prevention said detailed guidance on contact tracing for states was “forthcoming.” 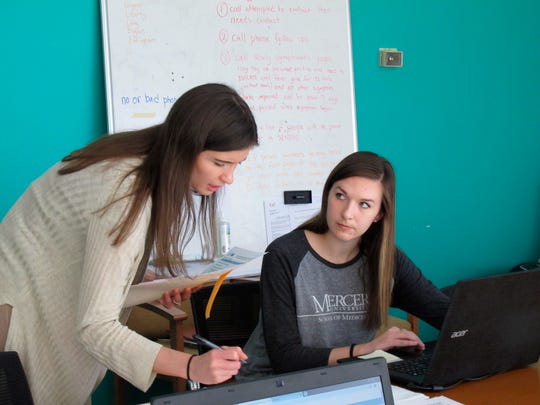 Medical student Catherine Waldron talks with epidemiologist Elizabeth Goff at the Georgia Department of Public Health's district office in Savannah, Ga. Waldron is among about 30 medical students helping the Georgia health agency's coastal district with contact tracing aimed at identifying relatives, friends and co-workers of people infected by the virus to prevent its spread to others. (Photo: Russ Bynum, AP)

“We’ll not ever control the whole country unless we have the same strategy,” said Dr. Cyrus Shahpar, a former CDC official. “Right now, that’s not what we’re doing.”

Contact tracing is a pillar of infection control and typically requires in-depth interviews with those who may have been exposed. The number of public health employees needed for the work throughout the U.S. remains up for debate, but some estimates are as high as 300,000 people.

Louisiana, which has been hit hard by the virus, had only about 70 people working on tracing contacts this week. By comparison, North Dakota, with less than a fifth of Louisiana’s population and no serious outbreaks, has 250 case investigators and will soon bring on an additional 172 staffers.

With more than 37,000 confirmed coronavirus cases, Pennsylvania is still working to determine how many people it will need in the field. In Texas, coordination will be left to individual counties.

Health experts worry that a scattershot approach will only prolong the crisis, and they urge a more coordinated strategy. In South Korea, for example, the national health agency oversees the effort, gathering and sharing data on the movement of confirmed cases with local health departments. The country has seen its case count plummet and remain low.

There is little consensus in the states on basic questions such as how extensive the tracing should be and whether cellular data should be used to assist in identifying people who may have been exposed at a public location.

Some states have taken decisive action. Utah has 250 people at the state health department assisting local agencies in tracing contacts, and it can add 500 more staffers if needed. Massachusetts expects to spend $44 million on an aggressive contact-tracing plan and has already begun hiring and training the 1,000 people it expects to need.

Other states are slower to create robust tracing systems.

California, with nearly 40 million people and more than 37,000 confirmed cases, has limited tracing ability. It recently announced plans to establish a “contact-tracing workforce” and train 10,000 people. In Los Angeles, the nation’s second-most populous city, those found to be positive at drive-thru testing centers are being asked to sign up for a contact-tracing website.

Pennsylvania initially conducted tracing until the state began seeing community spread of the virus, and its ability to follow contacts was overwhelmed. Now it’s trying again. State officials estimate that it will take six hours to conduct basic tracing if an individual reported just 10 contacts.

Washington state, which experienced the first major outbreak in the U.S., was also overwhelmed. It now has about 700 people focused on tracing contacts, with plans to expand the workforce to 1,500 by the second week of May.

One major challenge for states is the ability to conduct widespread virus testing, which has been hampered in part by the difficulty in obtaining testing supplies. Washington Gov. Jay Inslee has said that for the state’s contact-tracing plan to work, daily testing needs to increase from about 4,000 tests to 20,000 or 30,000 tests.

The CDC said Friday that it is working with state and local jurisdictions to identify needs for “surge support staff” to assist with contact tracing and other infection-control measures. Currently, states seeking help must rely on CDC staff members who are embedded with state health departments and other agencies.

After a $1 billion congressional appropriation this week, the CDC plans to prepare teams of experts to help states coordinate contract-tracing efforts. The CDC Foundation has launched a “COVID-19 Corps” hiring campaign to bring in dozens of workers.

Having the ability to trace contacts was identified as part of “core state preparedness responsibilities” outlined in the White House’s guidelines for reopening. Some states, such as Georgia and Tennessee, are easing social and business restrictions even as they try to build up their contact-tracing ability.

Georgia Public Health Commissioner Kathleen Toomey said the state plans to retrain some employees for contact tracing and use a new mobile app to track infections. It will ask infected people to voluntarily share their cellphone data so the state can find other contacts.

“That sounds like a great plan, but by their own words it’s being finalized and customized. It hasn’t been tested,” said Dr. Harry J. Heiman, a professor of public health at Georgia State University. “The idea that we’re going to start opening the doors before these things are in place, I think is irresponsible.”