Face masks make a political statement in era of coronavirus

Face masks make a political statement in era of coronavirus

Washington – The decision to wear a mask in public is becoming a political statement – a moment to pick sides in a brewing culture war over containing the coronavirus.

While not yet as loaded as a “Make America Great Again” hat, the mask is increasingly a visual shorthand for a debate pitting those willing to follow health officials’ guidance and cover their faces against those who feel it violates their freedom or buys into a threat they think is overblown. 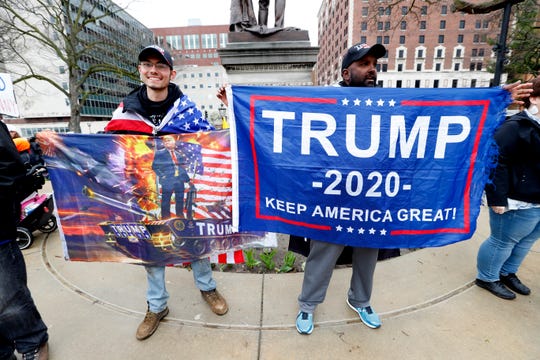 That resistance is fueled by some of the same people who object to other virus restrictions. The push back has been stoked by President Donald Trump – he didn’t wear a mask during a Tuesday appearance at a facility making them – and some other Republicans, who have flouted rules and questioned the value of masks. It’s a development that has worried experts as Americans are increasingly returning to public spaces.

Karen Spitler of Lansing , an counter-protesters holds a sign during a rally at the state Capitol in Lansing, Mich., Thursday, April 30, 2020. (Photo: Matthew Dae Smith, AP)

“There’s such a strong culture of individualism that, even if it’s going to help protect them, people don’t want the government telling them what to do,” said Linsey Marr, a Virginia Tech engineering professor with experience in airborne transmission of viruses.

Inconclusive science and shifting federal guidance have no doubt muddied the political debate. Health officials initially said wearing masks was unnecessary, especially amid a shortage of protective materials. But last month, the Centers for Disease Control and Prevention began recommending wearing cloth masks in public to prevent transmitting the virus to others. 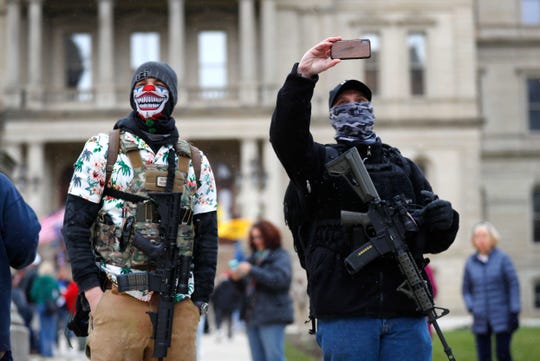 Protesters with rifles watch outside the State Capitol in Lansing, Mich., Wednesday, April 15, 2020. Some Lansing protesters wore masks, but whether for protection from the coronavirus or just to hide their identity isn't certain. (Photo: Paul Sancya, AP)

Whether Americans are embracing the change may depend on their political party. While most other protective measures like social distancing get broad bipartisan support, Democrats are more likely than Republicans to say they’re wearing a mask when leaving home, 76% to 59%, according to a recent poll by The Associated Press-NORC Center for Public Affairs Research.

The split is clear across several demographics that lean Democratic. People with college degrees are more likely than those without to wear masks when leaving home, 78% to 63%. African Americans are more likely than either white people or Hispanic Americans to say they’re wearing masks outside the home, 83% to 64% and 67%, respectively.

Maalik Mitchell, center left, sheds tears as he says goodbye to his father, Calvin Munerlyn, during a vigil Sunday, May 3, 2020, in Flint, Mich. Calvin Munerlyn was shot and killed after denying a maskless woman entry to the Family Dollar store he worked at in Flint. (Photo: Jake May, AP)

The notable exception is among older people, a group particularly vulnerable to serious illness from the virus. Some 79% of those age 60 and over were doing so compared with 63% of those younger.

“Who knows what the truth is on masks?” asked Republican Kentucky Sen. Rand Paul, who, unlike some of his colleagues, went without a mask Tuesday in the Senate. Paul already contracted the virus and believes he is no longer contagious.

His comments were a long way from New York Gov. Andrew Cuomo’s moral argument for the mask a few days earlier.

“How people cannot wear masks – that to me is even disrespectful,” Cuomo said. “You put so many people at risk because you did not want to wear a mask?”

Effectiveness aside, politicians of both parties are clued into the powerful symbolism of the mask, and many Americans take their cues from the president.

President Donald Trump participates in a tour of a Honeywell International plant that manufactures personal protective equipment, Tuesday, May 5, 2020, in Phoenix. He wore no mask. (Photo: Evan Vucci, AP)

Trump was barefaced when he spoke to masked journalists, workers and Secret Service agents at the Arizona factory Tuesday. He later said he briefly wore a mask backstage but took it off because facility personnel told him he didn’t need it.

But Trump has been mask averse for weeks. Within minutes of the CDC announcing its updated mask recommendations, he said, “I don’t think that I’m going to be doing it.”

Trump has told advisers that he believes wearing one would “send the wrong message,” according to one administration and two campaign officials not authorized to publicly discuss private conversations. The president said doing so would make it seem like he is preoccupied with health instead of focused on reopening the nation’s economy – which his aides believe is the key to his reelection chances in November.

Moreover, Trump, who is known to be especially cognizant of his appearance on television, has also told confidants that he fears he would look ridiculous in a mask and the image would appear in negative ads, according to one of the officials.

“It’s a vanity thing, I guess, with him,” House Speaker Nancy Pelosi said of Trump on MSNBC. “You’d think, as the president of the United States, you would have the confidence to honor the guidance he’s giving the country.”

That’s left those around him unsure of how to proceed. White House aides say the president hasn’t told them not to wear them, but few do. Some Republican allies have asked Trump’s campaign how it would be viewed by the White House if they were spotted wearing a mask, according to two campaign officials who spoke on condition of anonymity because they weren’t authorized to discuss private conversations.

Meanwhile, Trump’s reelection campaign has ordered red Trump-branded masks for supporters and is considering giving them away at events or in return for donations. But some advisers are concerned the president will later sour on the idea, according to one campaign official.

That uncertainty was on display last week, when Vice President Mike Pence went maskless at the Mayo Clinic in Minnesota. He later acknowledged he should have worn one and did use a mask during a subsequent trip to a ventilator plant. 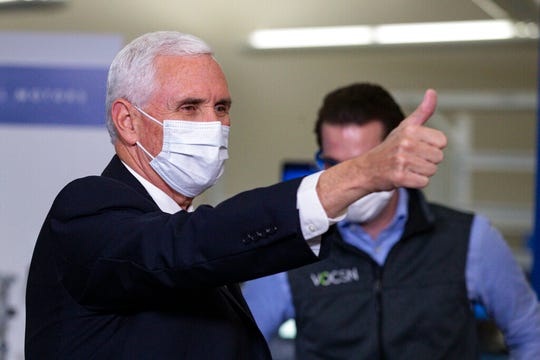 The issue has been far less fraught for Democrats, whose presumptive presidential nominee, Joe Biden, has said he wears a mask when interacting with the Secret Service.

Dilemmas for politicians and other Americans are only going to increase as parts of the country begin easing stay-at-home orders and businesses reopen with new rules. The tensions have already flared in Michigan, where a man was shot and killed over a mask dispute at a store.

One of the earliest communities to require masks in public was Laredo, Texas. A $1,000 noncompliance fine was negated by an order from the governor, but Mayor Pete Saenz said his community is still asking citizens to comply so hospitals aren’t overtaxed with new cases.

“We don’t want to violate anyone’s civil liberties,” Saenz said. But “we can’t help you, if it’s beyond our medical capacity, whether you exercise your civil liberties or not.”