Seattle — Aram Westergreen, a construction worker idled last month in the COVID-19 pandemic, filled out an online Washington state form recently to report a pawn shop open despite a ban on nonessential businesses.

Westergreen lives in Tacoma, Washington, less than an hour from the nursing home where the first COVID-19 death in the United States was reported in late February. With more than 900 deaths statewide since, and a stay-at-home order in place since March 23, Westergreen, like many of his neighbors, has suffered from lost income, but regards social distancing as critical to slow the spread of the pathogen. 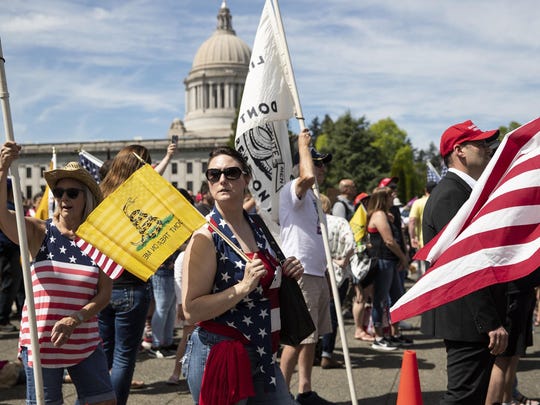 Parkland, Wash., resident Tammy Snider during a rally against coronavirus restrictions on Saturday at the Washington State Capitol in Olympia, Wash. Snider says she is tired of being at home in quarantine and “really thinks this is all politics.” (Photo: Amanda Snyder / Tribune News Service)

To his alarm on Thursday, he opened his email to find a message with the subject line “Lowlife scumbag whistle-blower snitches.” It was sent from a stranger to about 100 people, informing them that their names, reports and identifying information had been released by the government and shared on social media.

“All you cowards who reported businesses as being open … guess what … social media is about to reign fire on you,” the message said. “How can you live with yourself when the REAL DOCTORS have already come out and stated that social distancing is making matters worse? Every one of you slimeballs must only get your news from CNN.”

The emailer was correct in one respect. The Washington Military Department, which is coordinating state response to the pandemic, had responded to public records requests by releasing spreadsheets containing more than 7,600 reports of suspected stay-home violations, including email addresses and phone numbers of those lodging complaints.

Westergreen and many others did not immediately realize that Washington State Three Percent, regarded by civil rights organizations as a far-right militia organization, had joined another militant group opposed to state coronavirus lockdowns in posting the reports on Facebook and other sites. Some of those listed in the spreadsheets say they are now being harassed, including receiving death threats.

Such public naming and threats are among the latest tactics being employed by far-right, neo-Nazi and white nationalist groups seeking to exploit the pandemic, according to organizations that track their activities.

Extremists have been spreading hate and misinformation on social media while encouraging members to attend reopen rallies such as one Saturday at the state capitol in Olympia, according to Western States Center, a Portland, Oregon, organization that tracks white nationalist and alt-right groups.

White supremacists from “accelerationist” groups — which seek to weaken the political system that they believe has been diluted by multiculturalism — have sought to weaponize the deadly virus, calling on members to engage in direct attacks in order to expedite the collapse of society, said Joanna Mendelson, a national expert on extremism at the Anti-Defamation League.

Accelerationist groups have also been organizing coronavirus-related discussions online around the word “boogaloo.” Usage of the word in far-right context emanated from an unlikely source: the 1984 break-dancing film “Breakin’ 2: Electric Boogaloo.” The word is now being used by extremists as a way to refer to what they believe is a looming civil war. Other shorthand references to the word that extremists use is “the boog.”

“There is an enormous indoctrination effort in order to expand their base, and the majority of that recruitment takes place in the virtual space. We have seen them using memes in order to express hatred, targeting Jews,” Mendelson said.

“Posting this public information incites and encourages harassment and even possible violence,” she said.

Complainants whose names were exposed, and who were since contacted by The Times, reported receiving hostile messages, emails and phone calls.

One voicemail said, “You called on March 30th at 9:15 p.m. to report a nonessential business … massage parlor. When you did that, you triggered a chain of events which made it known that you were the kind of person who would stomp on the rights of people who are trying to run a business, and that you believe yourself to be superior to them.”

The caller said he hoped that the complainant would do something to prove that she had changed her mind. “If not, have fun with the, you know, what’s going to happen next,” he said.

The woman in her 40s who received the call, who works from home in Arlington, Wash., said in an interview Saturday that she had no intention of changing her mind about the importance of nonessential businesses remaining closed. Speaking on condition that her name be withheld, she described her personal experience with COVID-19.

“My uncle contracted it,” she said. “He went to the hospital and was intubated almost immediately, and died days later.”

Matt Marshall, Washington State Three Percent president, said Saturday that his organization posted the reports not to incite threats but to expose those who filed them for having turned in business owners trying to maintain livelihoods. “They need to know that their neighbors have the right to face their accusers,” he said.

Marshall, a Republican running for a seat in the state Legislature, said that he was provided the reports by one of the political party’s county officers, whom he declined to identify. That person had obtained the spreadsheets by submitting a public records request — one of two dozen people to have done so, according to Chelsea Hodgson, a spokeswoman for the state agency coordinating coronavirus response.

Marshall spoke at Saturday’s protest in Olympia, along with Joey Gibson, leader of the right-wing group Patriot Prayer, and state Rep. Matt Shea, a far-right lawmaker suspended from the GOP caucus last year after an investigation accused him of planning and participating in domestic terrorism. The rally drew about 1,500 people, roughly 500 fewer than a similar protest last month.

In early April, the FBI sent out an intelligence report from the New York field office saying white supremacists and neo-Nazis were encouraging the spread of the coronavirus to law enforcement officers and the Jewish community.

The Asian Pacific Policy and Planning Council — a coalition of 40 nonprofit groups that provide health, job counseling and other social services — started an online reporting center tracking hate reports. The organization recorded 670 complaints of hate crimes during the week of March 19, the first week it kept track. By the end of the second week, the group had received 1,100 complaints and was averaging around 100 a day. Some 32% of those incidents occurred in California, the council said, and included incidents in grocery stores, big-box retail shops and pharmacies.

“What you have is Charlottesville on steroids,” said Erroll Southers, a former FBI special agent and currently director of Homegrown Violent Extremism Studies at USC, referring to the white nationalist rally in Charlottesville, Va., in 2017, where violent clashes broke out and a woman was killed.

“Charlottesville had Klan members, League of the South confederates, neo-Nazis and nationalists, all who typically don’t play well together. What you have now is all those groups plus your Boogaloo, anti-vaxxers, your Trump supporters, who have nothing to do with either group, all out there … and it’s made for an incredibly dangerous situation.”

Far-right groups have long sought to exploit global crises to expand their ranks and drive a wedge between them and those who disagree with them.

A May 2020 study conducted by researchers with the Federal Reserve Bank titled, “Pandemics Change Cities: Municipal Spending and Voter Extremism in Germany: 1918-1933,” found a correlation between deaths in the years after the Spanish flu pandemic a century ago and subsequent support for right-wing extremists blaming minorities and foreigners for the pandemic and economic hardships that followed.

Peter Simi, a professor of sociology at Chapman University, said Western nations are likely to experience a similar situation now.

“This crisis could strain the political system,” Simi said. “You have people who are experiencing heightened levels of emotion, resources being utilized in different ways and people who are being stretched thin. As a result, it does create more opportunity for extremists to mobilize around.”

“I would expect you’ll have an exacerbation of certain economic, social pressures,” he added, “and you’re going to have changes in emotional temperament, heightened levels of depression and anxiety, which are ripe for fascist, far-right movements to take advantage of.”