The park, which closed Jan. 25, will limit visitor numbers and is keeping some attractions closed in line with social distancing guidelines

Shanghai — Visitors wearing face masks streamed into Shanghai Disneyland as China’s most prominent theme park reopened Monday in a new step toward rolling back anti-coronavirus controls that shut down its economy.

The park, which closed Jan. 25, will limit visitor numbers and is keeping some attractions closed in line with social distancing guidelines, company executives said.

The reopening adds to efforts by companies and the ruling Communist Party to revive the world’s second-largest economy following a shutdown that plunged it into its worst slump since at least the 1960s. 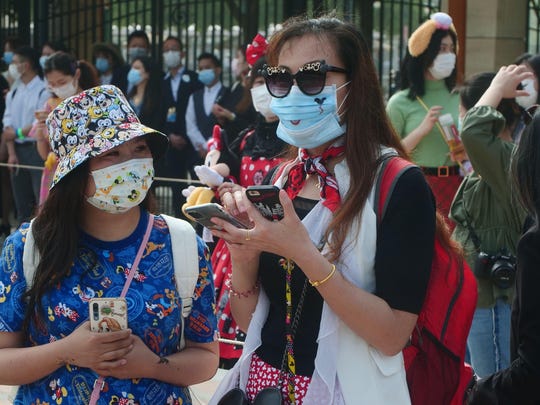 Visitors, wearing face masks, wait at the entrance of the Disneyland theme park in Shanghai as it reopened Monday. Visits will be limited initially and must be booked in advance, and the company said it will increase cleaning and require social distancing in lines for the various attractions. (Photo: Sam McNeil / Associated Press)

“We hope that today’s reopening serves as a beacon of light across the globe, providing hope and inspiration to everyone,” the president of Shanghai Disney Resort, Joe Schott, told reporters.

China, where the pandemic began in December, was the first economy to shut down and the first to reopen after the ruling party declared the disease under control in early March.

Factories and shops have reopened but cinemas, karaoke parlors, gyms and other businesses still are closed.

Disney guests, many wearing Mickey Mouse ears, and children dressed as movie characters were checked for the virus’s telltale fever at the gate. The company’s signature tune, “When You Wish Upon a Star” played over loudspeakers.

Decals on sidewalks and at lines for attractions show visitors where to stand to keep a safe distance. The company said rides will be limited to one group of visitors per car to keep strangers separated.

“Excited about the opening of the gate!” people in the first group of guests shouted as they entered the park.

Visitors are required to make advance reservations, show government-issued identification and download a smartphone app issued by the Shanghai city government that tracks their health and their contacts with anyone who might have been exposed to the virus.

That allows the company to “understand and regulate the flow of traffic,” said Andrew Bolstein, the park’s senior vice president for operations.

“We hope to bring them back some time soon,” he said.