The Grand Canyon had been closed since April 1, one of the last big national parks to shut down completely to visitors.

By 7:30 a.m., more than two dozen people were enjoying viewpoints along the South Rim.

Among them was Matthias Zutter, 35, who was traveling through Arizona with his wife in a camper van as part of a final adventure before moving back to their hometown of Stans, Switzerland. The couple have been living in the U.S. for the past five years. They had visited the Grand Canyon once already but not the South Rim, which they’ve always wanted to hike. 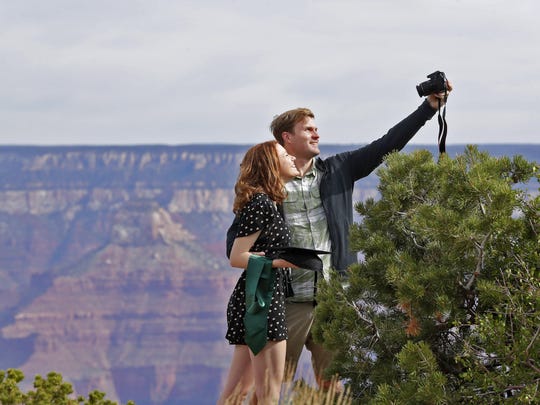 “We got to see it one more time but not experience it the way we’d like to,” Zutter said. “At least it opened up today for us to stop and enjoy the views. We’ve got to look at the positive side.”

The couple, who were carrying masks, also never felt at risk of getting sick while they were there.

“I’d say you could clearly see that people took precautions and were keeping their distance and not touching things if it was not necessary,” Zutter said.

The Grand Canyon had been closed since April 1, one of the last big national parks to shut down completely to visitors. At the time, health officials in Coconino County said keeping the park open put employees, residents and tourists at risk.

Liz Archuleta, chairwoman of the Coconino County Board of Supervisors, reiterated that visitors must do their part as well.

Park officials said the South Rim entrance will only open from 6-10 a.m. through Monday. Commercial services within the park remain closed. Those include hiking trails, visitors centers, hotels and restaurants — the places people tend to congregate. Visitors were told to bring food, water and hand sanitizer. There are no overnight accommodations available. Some restrooms along with portable ones were available.

Meanwhile, the residential area where more than 2,000 people live year-round was cordoned off with cones and barrels to keep visitors away from the housing areas. About 20 miles (32 kilometers) of roadway were accessible to tourists that allow them to walk along the rim of the canyon and stand at a number of viewpoints.

“We saw this route as a good option to reopen,” Grand Canyon spokeswoman Lily Daniels said. “We’re kind of mirroring how the operational stance was prior to us closing, that was a phased closure.”

It reopened Friday, in line with the expiration of Gov. Doug Ducey’s stay-at-home order. 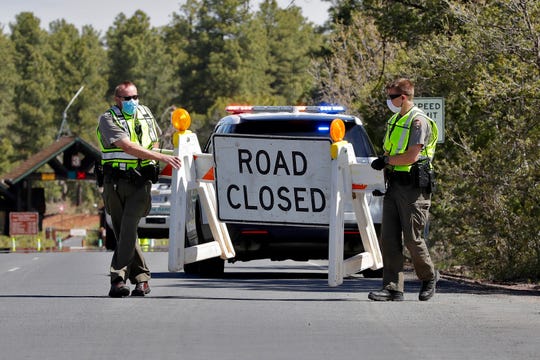 U.S. Park Rangers close the entrance to the Grand Canyon for the day Friday in Grand Canyon, Ariz. Grand Canyon National Park has increased recreational access at the South Rim to selected viewpoints. The South Rim will reopen May 15-18 for incoming traffic from 6-10 a.m. with limited day-use access. The National Park Service is using a phased approach to increase access on a park-by-park basis during the COVID-19 pandemic. (Photo: Matt York, AP)

Signs went up reminding tourists to keep their distance from another and stay in groups of less than 10. Park employees also were giving friendly reminders, Daniels said.

“It’s mostly self-awareness, but we are still encouraging the same guidelines that the CDC is putting out,” she said.

The National Park Service says it is working with federal, state and local public health authorities to closely monitor the pandemic and using a phased approach to increase access on a park-by-park basis.

“This initial reopening phase will increase access to our public lands in a responsible way by offering the main feature of the park for the public, the view of the canyon, while reducing the potential exposure of COVID-19 to our nearly 2,500 residents,” Grand Canyon National Park Superintendent Ed Keable said.

The Grand Canyon will also be open from Friday to Monday of Memorial Day weekend with increased access and extended hours.

The parks gets about 6 million visitors a year, most of whom go to the South Rim. Those entrance gates were open Friday, and tourists were allowed in free. Visitors were blocked from entering at the East Rim entrance to limit travel through the Navajo Nation, where coronavirus has hit residents hard.

However, officials on the Navajo Nation, which stretches into northern Arizona, expressed disappointment at the reopening. There have been at least 3,740 positive cases and 127 deaths on the reservation, which also includes parts of New Mexico and Utah.

“We welcome the economic benefits that tourists bring, but we are also fearful of the potential negative impacts and had hoped that when the Grand Canyon closed on April 1, the park would remain closed until our positive COVID-19 numbers have flattened,” Navajo Nation President Jonathan Nez said.

The Sierra Club also cited the Navajo Nation in its criticism of the reopening. Alicyn Gitlin of the Sierra Club’s Grand Canyon Chapter said it could result in a “patrolling and enforcement nightmare.”

“Cases in Coconino County where Grand Canyon’s South Rim is located are still rising,” Gitlin said. “The large population that lives at Grand Canyon and all nearby communities are put at risk by this move.”

For most people, the new coronavirus causes mild or moderate symptoms, such as fever and cough that clear up in two to three weeks. For some, especially older adults and people with existing health problems, it can cause more severe illness, including pneumonia, and death.