In an 8 p.m. update, the National Hurricane Center said the storm was located about 175 miles northeast of Melbourne, Florida

Miami – A low pressure system just off the coast of Florida became a tropical depression Saturday, prompting forecasters to issue a tropical storm watch for a portion of the North Carolina coast.

In an 8 p.m. update, the National Hurricane Center said the storm was located about 175 miles northeast of Melbourne, Florida. It has maximum sustained winds of 35 mph. 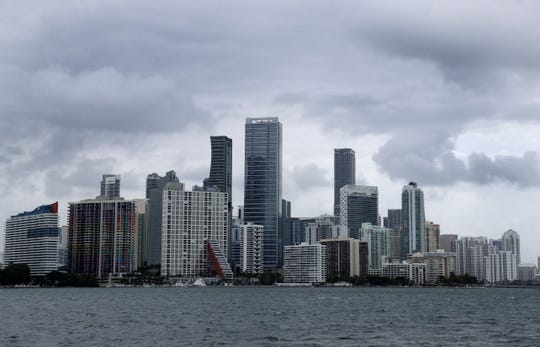 Clouds loom over the Miami skyline Thursday, May 14, 2020. According to the National Hurricane Center website, "A trough of low pressure over the Straits of Florida is producing a large area of cloudiness and thunderstorms. (Photo: Wilfredo Lee, AP)

The storm, which has been named Tropical Depression One, is moving to the northeast at 14 mph (22 kph).

The storm is forecast to keep the same track, which means the tropical depression will be offshore, but parallel to, the east coast of Florida. After that, the track is less clear.

“The system should gradually strengthen during the next couple of days as it remains over the Gulf Stream current and in relatively low wind shear conditions,” the NHC wrote.

Local forecasters in the Bahamas said showers have lingered over the islands of Grand Bahama and Abaco, which are still struggling to recover after being hit by a Category 5 hurricane last year.

However, no flooding has been reported as the depression swirls just northwest of the archipelago and is expected to head into open ocean as it strengthens.

Officials said they were prepared to evacuate patients currently housed in tents in Grand Bahama after Hurricane Dorian damaged the island’s hospital, but forecasters said the bulk of thunderstorms are located north and east of the depression and are not expected to affect the region.

Tropical-storm-force winds and heavy rains are possible in North Carolina on Monday, and dangerous coastal surf conditions and rip currents are expected to spread northward from Florida to the mid-Atlantic states during the next few days.

A tropical storm warning was issued for parts of North Carolina’s coast, from north of Surf City to Duck, including Pamlico and Albemarle Sounds.