Seattle is a young city with a long history of protests

The city has been the site for large labor movements before World War I to the massive 1999 WTO trade protests.

Seattle is a young city with a long history of protests

Seattle – Large protests in Seattle over police brutality and racial injustice have again caught the nation’s eye, but big, unruly demonstrations have been part of the city since shortly after it was founded in 1851 by settlers in a log cabin on a lonely strip of land along the Puget Sound.

Demonstrators this week staked out several blocks near downtown Seattle after officers withdrew from a police station following violent confrontations. They named it the “Capitol Hill Autonomous Zone,” demanded broad reforms and have faced blowback from President Donald Trump, who called them anarchist occupiers.

Similar descriptions of Seattle protests have been used for more than 100 years, stretching from large labor movements before World War I to the massive 1999 WTO trade protests. 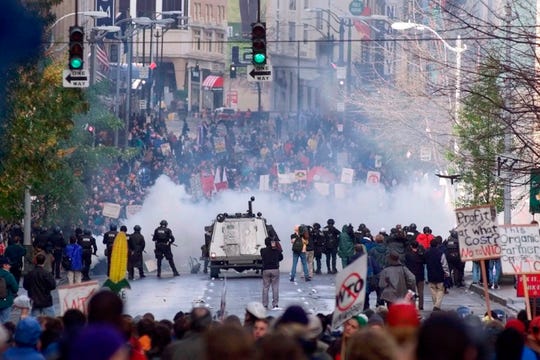 Seattle police use tear gas to push back World Trade Organization protesters in downtown Seattle in 1999. Seattle has a long history of demonstrations, stretching back to labor movements before World War I. (Photo: Eric Draper, AP)

“Seattle went from log cabin to the Space Needle in a very short period of time,” said Knute Berger, a local writer and historian. Large demonstrations here have been national news since the Wobblies – the Industrial Workers of the World labor union – were active in the area around World War I, Berger said.

The city’s reputation as a hub of protest was sealed by the huge Seattle workers strike in 1919, when tens of thousands of workers walked out for days to demand better wages and conditions. For decades, Seattle has often been synonymous with unrest, especially for critics of social change, Berger said.

“Back in the ‘30s, we were considered ‘the Soviet of Seattle.’ After WTO, the word was used as, well, ‘We don’t want another Seattle.’”

Mayor Jenny Durkan addressed the city’s history with social movements this week when discussing the autonomous zone, noting that the quirky Seattle neighborhood has for decades been a hub for movements like gay rights and other social issues.

“I’ve been going to Capitol Hill for almost 50 years,” Durkan told reporters Thursday. “I just want to say, I know there has been an acronym that it’s now the ‘Capitol Hill Autonomous Zone.’ I’ve got news for people. It’s been autonomous my whole life.”

In the Vietnam era, the Seattle Liberation Front was one of the most high-profile anti-war groups in the nation. Federal officials accused some members of trying to incite riots.

More recently, it was the 1999 WTO protests that garnered Seattle worldwide attention. City officials had hoped the meeting of the international trade regulation group would be a coming out party of sorts for the fast-growing tech hub.

But the city was overwhelmed by tens of thousands of people upset over what they saw as the inequities of capitalism and the exploitation of workers. Some black-clad anarchists broke windows and vandalized stores, hundreds of people were arrested and the then-mayor declared a downtown curfew to quell the unrest.

In the 20 years since the WTO protests, Seattle has seen explosive growth, with Amazon adding tens of thousands of workers near downtown and other tech behemoths expanding operations.

That growth has led to soaring housing costs and an economic divide that Berger said are underlying the current demonstrations.

“The issues of social justice and equity have increased because of this enormous disparity,” he said.

And being one of America’s youngest cities allows people to use it as sort of a blank slate, Berger said, and encourages people to come who want to make big changes – whether in business, innovation or social areas. 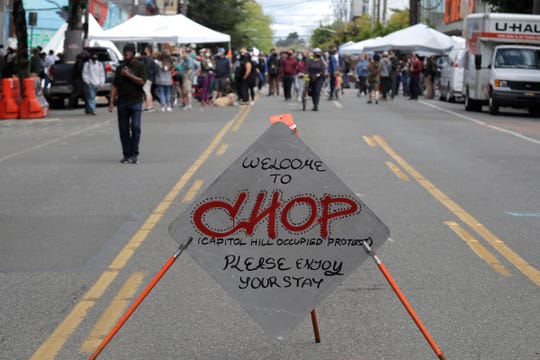 A sign reads "Welcome to CHOP," Sunday inside what has been named the Capitol Hill Occupied Protest zone in Seattle. Protesters calling for police reform and other demands have taken over several blocks near downtown Seattle after officers withdrew from a police station in the area following violent confrontations. The CHOP name is a change from CHAZ (Capitol Hill Autonomous Zone) that was used earlier in the week. (Photo: Ted S. Warren, AP)

The city is also notoriously difficult to govern. It’s rare for mayors to be reelected as they often try to satisfy the diverse demands of a booming business sector, an active labor community and a strident social justice movement.

Its latest protest epicenter, also known as the Capitol Hill Occupied Protest area, has been peaceful so far, Seattle Police Chief Carmen Best said on CBS’ “Face the Nation” on Sunday. She wants officers to return to the precinct without creating “something that devolves into a force situation.”

“We’re really trying to take a methodical, practical approach to reach a resolution where everyone gets out of here safely,” she said.

Best expects the protests around the country to mark a historical turning point. “We are going to move in a different direction and policing will never be the same as it was before.”

On Capitol Hill, protester Mark Henry Jr. of Black Lives Matter said the current movement is broad and focused on change. But he said it incorporates many points of view.

“Seattle is a very diverse community, it would take me a long time to represent our community,” he said.