Missouri officer accused of striking man with SUV is charged

A white suburban St. Louis police detective captured on video apparently hitting a black suspect with a police SUV then kicking and punching him

Missouri officer accused of striking man with SUV is charged

O’Fallon, Mo. – A white suburban St. Louis police detective who was captured on video apparently hitting a black suspect with a police SUV then kicking and punching the man was charged Wednesday with two counts of assault and armed criminal action.

Special Prosecutor Tim Lohmar announced the charges against Florissant Detective Joshua Smith, 31, who was fired June 10. The violent arrest June 2 came amid nationwide protests and unrest sparked by the police killing of George Floyd in Minneapolis.

“It’s situations like this that good cops hate because it makes everybody look bad,” Lohmar said at a news conference. 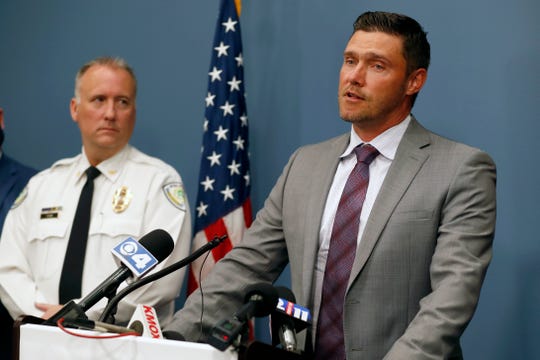 About one-third of Florissant’s 51,000 residents are black. The St. Louis suburb is just north of Ferguson, where Michael Brown’s death at the hands of a white police officer in 2014 was a catalyst for the Black Lives Matter movement. The St. Louis region has been the site of dozens of protests since Floyd’s May 25 death.

The arrest happened a day after four St. Louis police officers were shot and a retired St. Louis police captain was fatally shot during a violent night in the city. Florissant Police Chief Timothy Fagan has said Smith was on duty because of civil unrest in the area.

Officers were pursuing a vehicle occupied by three men because it had been seen near an earlier shots-fired incident, Florissant Mayor Tim Lowery said. The pursuit ended on a residential street in nearby Dellwood.

What happened next was captured by a resident’s doorbell camera and posted online by media outlet Real STL News soon thereafter.

Attorneys for the 20-year-old man who was struck released a second video Tuesday, from another home’s security camera, closer and with a different angle. It shows a car slowing on a residential street. Two men in the front seat jump out of the still rolling car, before a third man jumps out of the back seat.

The unmarked police SUV appears from behind the car and drives across part of the front lawn, striking the third man and knocking him onto the driveway as he loudly cries out in pain. An officer gets out of the SUV and appears to kick and hit the man on the ground as the man yells out, “OK! OK! OK!” and repeatedly says, “I don’t have nothing.”

“When you see the second video it’s clear that he intentionally ran into him and used the vehicle as a weapon,” the man’s attorney, Jerryl T. Christmas, said. “It’s difficult to watch, and difficult to listen to the audio because of the way he’s screaming and hollering.”

One of the assault charges against Smith is a felony, the other a misdemeanor. The armed criminal action charge, a felony, was filed because the officer used the vehicle as a weapon, Lohmar said, calling it a “4,000-pound missile.”

The range of punishment for both felonies is 10 to 30 years in prison, Lohmar said. Anyone convicted of armed criminal action must serve a minimum of three years in prison.

Smith’s attorney, Scott Rosenblum, has said what happened was an accident. He did not immediately respond to an email seeking comment Wednesday.

Smith’s police report said the man darted in front of him and he tried to swerve to miss him, Lohmar said.

Fagan said the man was treated at the hospital for an ankle injury, but Christmas said his injuries were far worse. He said the man’s leg was “shattered” and required multiple surgeries.

“He was traumatized,” Christmas said.

Fagan said police are seeking municipal charges against all three men for possession of drug paraphernalia and resisting arrest. No weapons were found on the men or in their car.

In addition to Lohmar’s investigation of the officer, U.S. Attorney Jeff Jensen said his office, the Civil Rights Division at the Department of Justice and the FBI also are reviewing the case to determine if a federal response is warranted.

The arrest led to several peaceful protests outside police headquarters in Florissant, including a “die-in” in which participants lay face down with their hands behind their backs. A few dozen protesters also gathered Monday outside Lohmar’s office urging prosecution of Smith.

Fagan called it “a sad day for the Florissant Police Department but an important day for the community.” He said he wanted the community to know that officers who break the law will be held accountable.