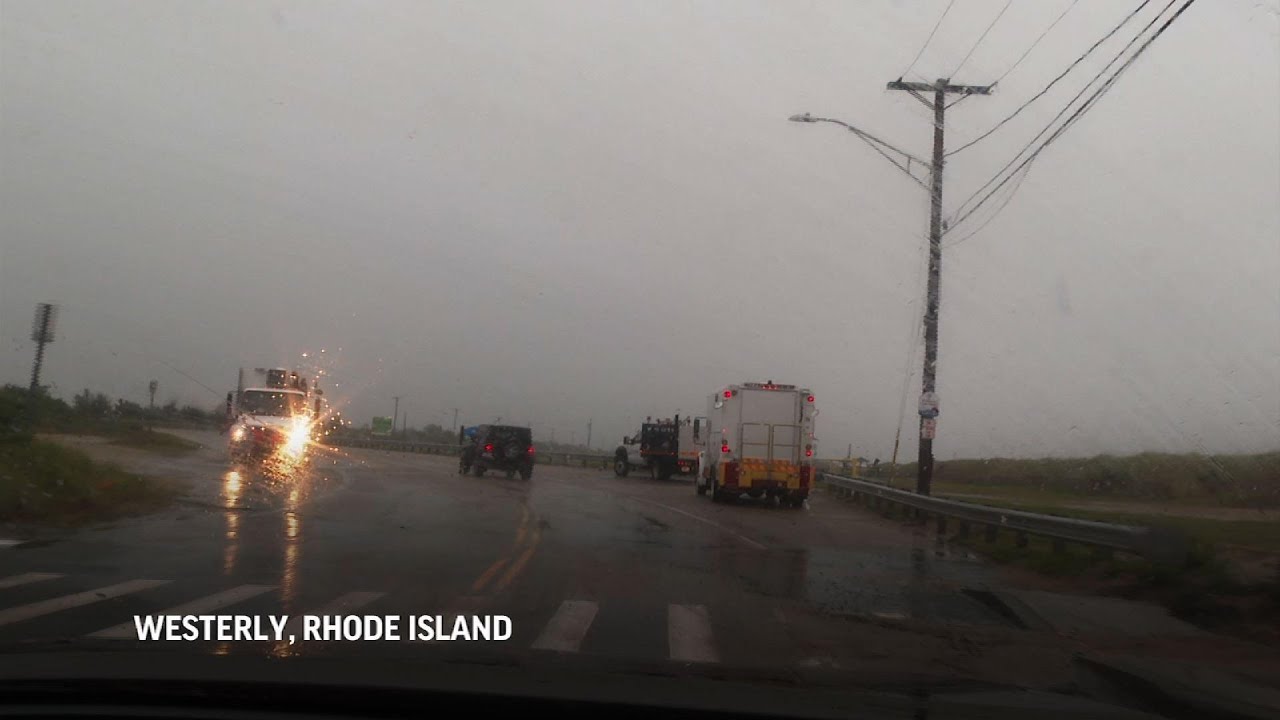 Westerly, R.I. — Storm Henri weakened into tropical depression Sunday night, as it crawled over the Northeast and continued to unleash downpours over a region already saturated by heavy rain and wind that knocked out power to over 100,000 homes and swamped roads, closed bridges and left people stranded in their vehicles.

Henri made landfall Sunday on the coast of Rhode Island, and the National Hurricane Center warned that the slow-moving storm would continue dumping heavy rains on wide swaths of the region.

The storm was downgraded from a hurricane before reaching New England, leaving many to breathe a sigh of relief. There were few early reports of major damage due to wind or surf.

But the storm’s heavy, sustained rains raised concerns about flooding from the storm that threatened to stall over the region before pivoting to the East and moving out to the Atlantic Ocean on Monday night. Some of the highest rain totals were expected inland.

President Joe Biden on Sunday promised to provide federal help as quickly as possible to the residents of northeastern states affected by Henri. The president declared disasters in much of the region, opening the purse strings for federal recovery aid.

“We’re doing everything we can now to help those states prepare, respond and recover," the president said.

Biden earlier had offered his condolences to the people of Tennessee, after severe flooding from an unrelated storm killed at least 22, including young children and elderly people, and left dozens of others missing.

Several major bridges in Rhode Island, which stitch together much of the state, were briefly shuttered Sunday, and some coastal roads were nearly impassable.

Westerly resident Collette Chisholm, a 20-year resident, said the waves were much higher than normal, but said she wasn’t concerned about her home suffering extensive damage.

“I love storms,” she said. “I think they’re exciting, as long as no one gets hurt.”

In Newport, Paul and Cherie Saunders were riding out the storm in a home that her family has owned since the late 1950s. Their basement flooded with 5 feet of water during Superstorm Sandy nine years ago.

“This house has been through so many hurricanes and so many things have happened,” said Cherie Saunders, 68. “We’re just going to wait and see what happens.”

Rhode Island has been hit by hurricanes and tropical storms periodically — including Superstorm Sandy in 2012, Irene in 2011 and Hurricane Bob in 1991. The city of Providence sustained so much flooding damage from a hurricane in 1938 and Hurricane Carol in 1954 that it built a hurricane barrier in the 1960s to protect its downtown from a storm surge coming up Narragansett Bay. That barrier — and newer gates built nearby — were closed for hours Sunday before reopening.

The National Weather Service recorded what could be the wettest hour ever in Central Park, with 1.94 inches of torrential rainfall pelting the park between 10 p.m. and 11 p.m. Saturday. Earlier in the evening, thousands attending a Homecoming concert at the park were forced to disperse because of heavy rainfall.

The weekend was the wettest two-day period in New York City since Tropical Storm Irene swept through a decade ago, said Dominic Ramunni, a National Weather Service meteorologist in Upton, New York.

Some communities in central New Jersey were inundated with as much as 8 inches (20 centimeters) of rain by midday Sunday. In Jamesburg, television video footage showed flooded downtown streets and cars almost completely submerged.

“This could have been a lot worse, particularly as it relates to wind,” New Jersey Gov. Phil Murphy said Sunday evening.

Likewise, Connecticut Gov. Ned Lamont said Henri was close to being in the “rear view mirror,” but said there’s still more work to do, even as mandatory evacuations were being lifted in some communities. Earlier in the day, about 250 residents from four nursing homes on the shoreline were relocated to other nursing homes.

The forecast had some fearing the worst effects of the rainfall were still to come in a region where the ground in many areas is saturated from recent rains.

Marshall Shepherd, director of the atmospheric sciences program at the University of Georgia and former president of the American Meteorological Society, said Henri was reminiscent in some ways of Hurricane Harvey, a slow-moving storm that decimated the Houston area in 2017.

“To the west side of the storm, you have a banding feature that has literally been stationary — sitting there and dumping rain. That will be a significant hazard for the New York and New Jersey area," Shepherd said.

After Tropical Storm Irene roared up the coast in August 2011, many were relieved when the New York City area largely was spared. But then the storm settled over the Green Mountains, and Irene became the biggest natural disaster to hit Vermont since an epic 1927 flood. Parts of the state got 11 inches of rain in just 24 hours. Irene killed six in Vermont, left thousands homeless, and damaged or destroyed more than 200 bridges and 500 miles of highway.

“I remember Irene and media outlets outside Vermont brushing it aside as if no big deal while it hit Vermont,” Robert Welch, a podcaster, tweeted Sunday. “I’ll relax when I see it at sea on radar.”

In one of his final appearances as governor before he is set to step down at the end of Monday over a sexual harassment scandal, New York Gov. Andrew Cuomo said that with the threat to Long Island diminishing, the state’s primary concern were inland areas like the Hudson River Valley, north of New York City, which was projected to get inches of rain over the next few days.

“In the Hudson Valley you have hills, you have creeks, the water comes running down those hills and turns a creek into a ravaging river," Cuomo said. "I have seen small towns in these mountainous areas devastated by rain. That is still a very real possibility.”

Major airports in the region remained open as the storm approached, though hundreds of Sunday’s flights were canceled. Service on some branches of New York City’s commuter rail system was suspended through Sunday, as was Amtrak service between New York and Boston.

Norbert Weissberg watched the waves from the edge of the parking lot at a beach in East Hampton as strong winds whipped an American flag flying from an unmanned lifeguard chair.

“I’m always excited about seeing something as ferocious as this,” said Weissberg. “It’s less ferocious than I thought. We’re all geared up for a major, major calamity, and it’s a little less than that.”