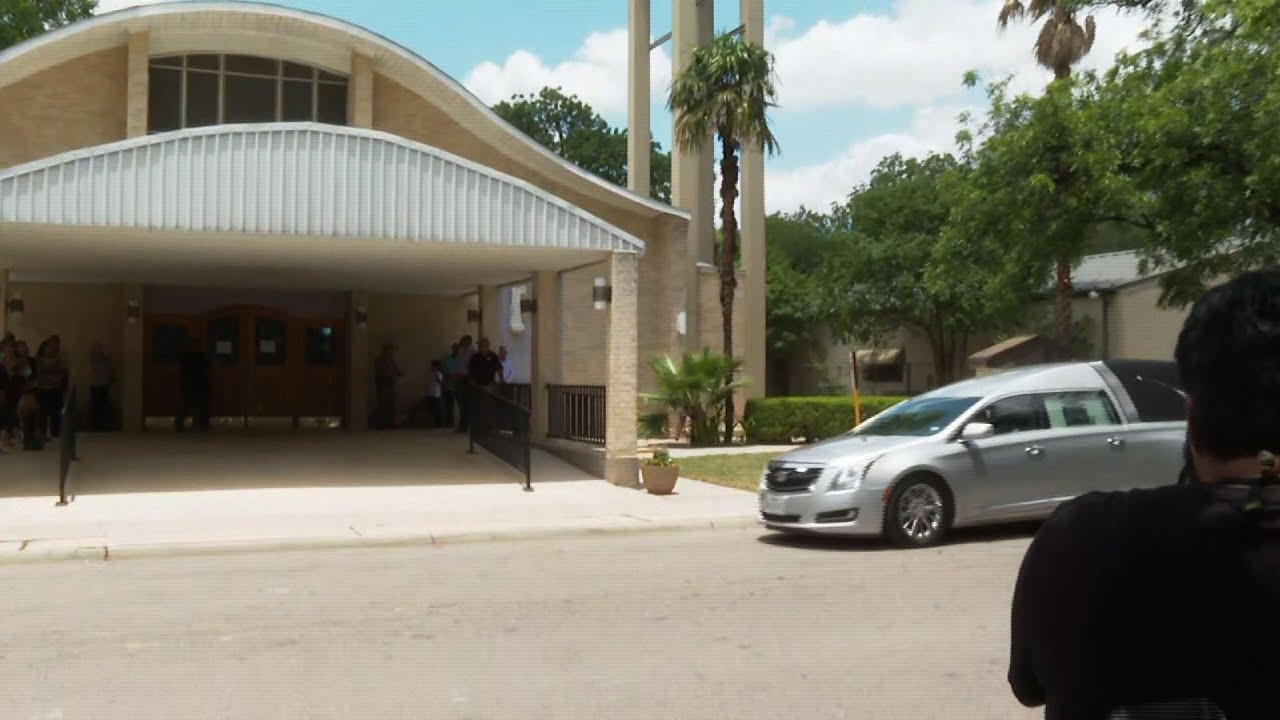 Uvalde, Texas — A week after a gunman ran into a Texas grade school and started shooting, the first of 21 funerals began on Tuesday. Meanwhile, at least one family still hasn’t seen the body of their loved one.

Hundreds of mourners turned out for an afternoon Mass to remember Amerie Jo Garza. Six pallbearers wearing white shirts and gloves carried her small casket into Sacred Heart Catholic Church, which turned away several mourners after reaching capacity. Maite Rodriguez’s funeral was scheduled for later Tuesday at one of the funeral homes in Uvalde, Texas.

The two 10-year-old fourth graders were among 19 children and two teachers killed when 18-year-old Salvador Ramos burst into a classroom on May 24 and began firing a military-style rifle. Visitation for one of the teachers, 48-year-old Irma Garcia, also was Tuesday, along with visitations for children Nevaeh Bravo and Jose Flores Jr.

Amerie loved purple, and Erika Santiago, her husband and their two children wore purple shirts adorned with images of the victims to Amerie’s funeral. Santiago described Amerie as “a nice little girl who smiled a lot,” and who was “so humble and charismatic but full of life.”

Santiago said her 10-year-old son, Adriel, watched in horror when the first images came out on the news after the shooting and he recognized his friends Amerie and Maite.

“It affected him so much,” Santiago said. “He told me he did not want to go to school fearing that could happen. He told me, ‘Mom, I just don’t feel safe.’”

Funerals will continue over the next two-and-a-half weeks. Vincent Salazar’s 11-year-old daughter, Layla, has the last of the scheduled services – her visitation is June 15 with the funeral the following day. Salazar said the family likely won’t see Layla’s body until soon before the visitation.

“It’s strange because usually when somebody dies, these things happen in three or four days,” Salazar said. “It’s not something that goes on this long. I understand there were other children as well, but we’re just waiting to get her back. That’s all we’re focused on.”

Uvalde County Justice of the Peace Eulalio “Lalo” Diaz Jr. said the bodies of all 21 victims were sent to the medical examiner’s office in San Antonio for autopsies, which he said is standard for a major crime.

“Our thing is to have all the facts,” Diaz said. “Even though there is a deceased shooter and we probably won’t have a trial, we still need to have the facts.”

Diaz said the autopsies are complete. He declined to discuss preliminary results and said final reports will take three to four months.

Meanwhile, Diaz said, there simply isn’t enough space at Uvalde’s two funeral homes to keep all of the bodies, so many were sent to out-of-town funeral homes until services near. He said the Uvalde funeral homes are working with the families on when they can see the bodies. A message left at Hillcrest Memorial Funeral Home wasn’t immediately returned. A woman who answered the phone at Rushing-Estes-Knowles Mortuary declined an interview request.

“It’s mainly because of the number of victims,” Diaz said, asking: “Where do you store that many people?”

Vincent Salazar said he and his family are going to as many visitations as they can to pay respects to the other victims and their families.

“Not necessarily going to the funerals because we’re still taking care of things hour by hour, day by day, here,” Salazar said. “We’ve got so much stuff going on with our own. You have to set everything up – obituaries, death certificates, funeral arrangements.

“That’s all we’re focused on right now – her, getting her back and being able to put her to rest,” Salazar said of Layla. “That’s it.”

Investigators continue to seek answer about how police responded to the shooting, and the U.S. Department of Justice is reviewing law enforcement actions.

The blame for an excruciating delay in killing the gunman – even as parents outside begged police to rush in and panicked children called 911 from inside – was placed on the school district’s homegrown police chief, Pete Arredondo, after the director of state police said Arredondo made the “wrong decision” not to breach the classroom, believing the gunman was barricaded inside and children weren’t at risk.

Steven McCraw, head of the Texas Department of Public Safety, said Friday that after following the gunman into the building, officers waited over an hour to breach the classroom. The revelation raised new questions about whether lives were lost because officers did not act faster to stop the gunman, who was ultimately killed by Border Patrol tactical officers.

Jacob Albarado, an off-duty Border Patrol agent who rushed to the school with a shotgun borrowed from his barber, said Tuesday it was chaotic when he arrived in search of his daughter and wife. Both were physically unharmed in the attack, he said.

Authorities have said Ramos legally purchased two guns not long before the school attack: an AR-style rifle on May 17 and a second rifle on May 20. He had just turned 18, permitting him to buy the weapons under federal law.

President Joe Biden’s long-planned meeting Tuesday with New Zealand Prime Minister Jacinda Ardern was to center on trade, climate and security in the Indo-Pacific. But after what happened in Uvalde and a week earlier in Buffalo, New York, where 10 Black people were killed by a shooter espousing racist “ replacement theory,” the conversation turned to gun control.

Ardern successfully won passage of gun control measures after a white supremacist killed 51 Muslim worshippers at two Christchurch mosques in 2019. Less than a month later all but one of the country’s 120 lawmakers voted in favor of banning military-style semiautomatic weapons.

Biden told reporters that he “will meet with the Congress on guns, I promise you,” but the White House has acknowledged that winning new gun legislation will be an uphill climb in an evenly divided Congress.