Florida reported nearly 3,500 more new cases of the coronavirus on Sunday, a dip from the record-breaking numbers of recent days

Tallahassee, Fla.  — Florida reported nearly 3,500 more new cases of the coronavirus on Sunday, a dip from the record-breaking numbers of recent days, as public health officials reissued advisories urging social distancing and some businesses reevaluate their decisions to reopen for business.

Some also had to rethink their Father's Day brunch plans because of health concerns.

The latest numbers was a drop from the record high of 4,000 new cases reported the day before.

To date, Florida has now had more than 97,000 Floridians infected with COVID-19. The number of deaths has now eclipsed 3,160, including the 17 additional deaths announced by health officials on Sunday.

Meanwhile, the rate of new infections continued to remain high, with nearly 12% of recent tests coming back from laboratories as positive.

Much of the state's new infections continued to be concentrated in the state's population centers in South Florida.

On Saturday, Gov. Ron DeSantis ordered the Health Department to reissue advisories urging Floridians to consider wearing masks to help keep the virus from spreading and to refrain from attending gatherings of more than 50 people.

Despite the rise in new infections, the governor has not signaled any possibility of retreat from reopening the state after three months of closures that have damaged the economy, kept hundreds of thousands of people from their jobs and disrupted the day-to-day lives of Floridians. 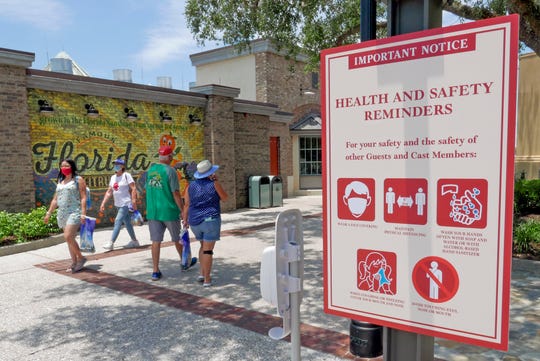 In this June 16, 2020, file photo, signs remind patrons to wear masks and other protocols because of the coronavirus pandemic as they stroll through the Disney Springs shopping, dining and entertainment complex in Lake Buena Vista, Fla. (Photo: John Raoux, AP)

Some businesses have delayed plans to reopen, while others have reclosed because of jitters over the rising number of new cases or because of employees becoming infected by COVID-19.

Earlier this week, Apple announced it would reclose stores in some states that showed a resurgence of the virus, including Florida.

During a Saturday news conference, DeSantis attempted to quell concerns about the spikes in new cases. Despite the high number of new infections, the governor noted that the number of hospitalizations hasn't been increasing at the same rate.

He said the wider availability of testing has contributed to the numbers. Much of the new infections involved younger people, many of them not exhibiting symptoms of the disease.

He urged them to take precautions, but he has resisted calls for making masks mandatory in places like supermarkets and other public places.