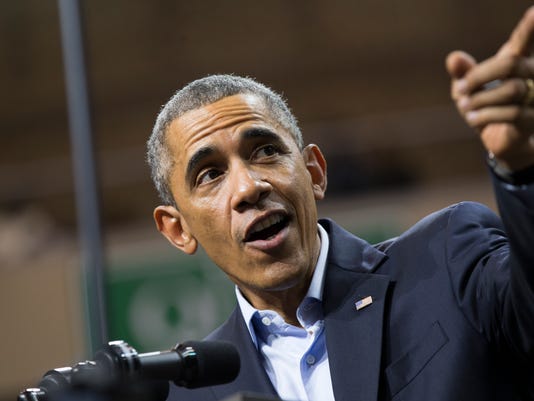 Washington — President Barack Obama says colleges and universities should be able to offer racial preferences in college admissions if they do it in a "careful way."

In an interview published Monday with the New Yorker magazine, the president said schools should be allowed to use racial preferences in admissions.

"If the University of Michigan or California decides that there is a value in making sure that folks with different experiences in a classroom will enhance the educational experience of the students, and they do it in a careful way," the magazine quoted him as saying. "Most of the time the law's principal job should be as a shield against discrimination, as opposed to a sword to advance a social agenda, because the law is a blunt instrument in these situations."

Obama also said the Supreme Court's decision in 2003 in the University of Michigan affirmative action cases that it expected "that 25 years from now, the use of racial preferences will no longer be necessary" was a "ballpark figure."

Asked if he agreed with that time line, Obama told the magazine that the opinion's author, then Justice Sandra Day O'Connor, would "be the first one to acknowledge that twenty-five years was sort of a ballpark figure in her mind."

In Michigan, that's largely a moot point. In April, the U.S. Supreme Court ruled voters can ban the use of race in college admissions, upholding a 2006 state ballot initiative.

In a 6-2 decision, the nation's highest court ruled Michigan's 2006 law banning its public universities from considering a student's race in admissions is constitutional. That change was up to the voters, the ruling said, over one justice's impassioned dissent that accused the court of simply wanting to wish away inequality.

"Michigan voters exercised their privilege to enact laws as a basic exercise of their democratic power," Justice Anthony Kennedy wrote for the majority. "(They) used the initiative system to bypass public officials who were deemed not responsive to the concerns of a majority of the voters with respect to a policy of granting race-based preferences that raises difficult and delicate issues."

The court did not address whether race preferences are permissible — which the court upheld in the Michigan case in 2003 — but only whether states can restrict their use.

In a separate opinion siding with Kennedy, Scalia said Michigan residents favored a colorblind constitution and "it would be shameful for us to stand in their way."

Sotomayor's 58-page dissent was the longest section of the court's 108-page ruling and included charts and graphics on the decline of black student enrollment at U-M, even as the number of minority college-age students has increased. She said upholding the ban forever stacks the deck against racial minorities in Michigan, and she took issue with her fellow justices' belief in race-blind admissions.

"It ignores the importance of diversity in institutions of higher education and reveals how little my colleagues understand about the reality of race in America," Sotomayor wrote.

Former U.S. Attorney Saul Green and a former Detroit deputy mayor noted in April that just 8.7 percent of all undergraduate students at Michigan are African-American, Hispanic or Native American.

"African-Americans account for barely 4 percent of this year's freshman class. To put that figure in context, African-American enrollment was more than twice as high in 1995 as it is today," he wrote in a Detroit News opinion piece.

The decision reversed an 8-7 ruling from the U.S. 6th Circuit in 2013 that had overturned Michigan's 2006 state constitutional amendment. The measure had been approved by 58 percent of state voters.

The debate started in the mid-1990s, when Southgate resident Jennifer Gratz was waitlisted at U-M, then rejected for admission. She filed a lawsuit, arguing that U-M was unfairly giving an advantage to minority candidates by awarding them points in the undergraduate admissions process.

The Supreme Court declared that policy unconstitutional in 2003. But in a companion case, the justices upheld the U-M law school's admission policy, which considered race more "holistically."