According to Debbie Dingell, her husband is "far better than when he was admitted" Friday 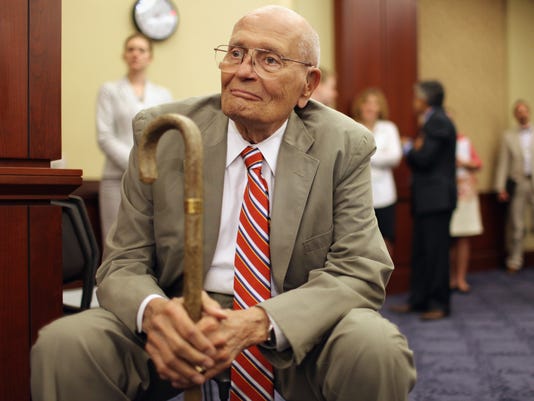 "John is likely to be at GW Hospital in Washington for two to three weeks with the goal of intense rehabilitation therapy," Debbie Dingell said in a Facebook update Tuesday.

The Dearborn Democrat, 88, is the longest serving member of Congress in history.

According to Debbie Dingell, her husband is "far better than when he was admitted to George Washington Hospital in D.C. last Friday. His stubbornness, which is what many love in him and what helped accomplish so much for this country, is on full display! It is that stubbornness coupled with his determination that is helping him to heal."

She added: "His wit, wisdom and, yes, his twitter capability, remain strong, too, and he is charming all the nurses and most of the doctors as well."

Debbie Dingell said previously her husband suffered a hairline hip fracture from a fall he took earlier this month.

John Dingell is retiring after 59 years from the House, where he cast more than 25,000 votes. His wife won the election in November to succeed him.

John Dingell has had difficulty standing at times and has largely gotten around the U.S. Capitol on a motorized scooter. He did get to his feet unassisted last month to accept the Presidential Medal of Freedom from President Barack Obama.