Rep. Todd Courser, R-Lapeer, takes his oath of office with his peers in the House of Representatives on the Michigan Legislature's first day of the new session, Wednesday, Jan. 14, 2015, in Lansing. Seated behind Rep. Courser is his wife, Fon Courser. Dale G. Young
Fullscreen

The new Speaker of the House, Kevin Cotter, R-Mount Pleasant, was all smiles while seated next to his wife, Jennifer. Dale G. Young
Fullscreen

Rep. Cindy Gamrat, R-Plainwell, reads the Bible in her temporary seat while waiting for her turn to select her permanent seat. Dale G. Young
Fullscreen

The new Speaker of the House, Kevin Cotter, R-Mount Pleasant, shares a chuckle with his wife, Jennifer, after all the seats were selected. Rep. Gary Glenn, R-Midland, uses his phone in the background. Dale G. Young
Fullscreen 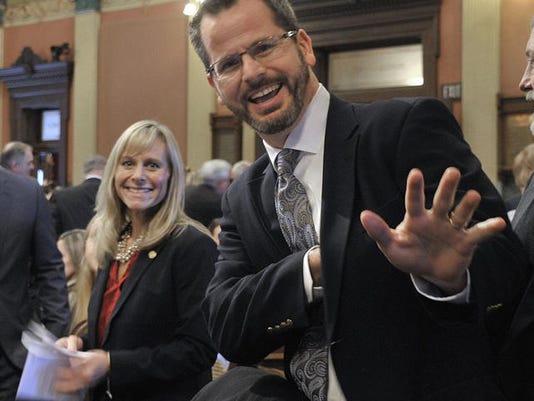 — Rep. Todd Courser views himself as a "strong maverick," sent by voters in rural Lapeer County to reverse decades of government intrusion into their lives and wallets.

And Rep. Gary Glenn begins his two-year term in the House of Representatives determined to block the implementation of Common Core education standards once and for all.

Of the 43 freshmen members of the 110-member state House sworn into office last Wednesday, none appears as vocal and determined to move the Republican-controlled Legislature further to the political right than Courser, Gamrat and Glenn.

The three conservative firebrands have formed an early alliance that could test the power and patience of veteran Republican lawmakers, including new House Speaker Kevin Cotter, R-Mount Pleasant.

Each was elected to the House after rising through the ranks of tea party activism and battling establishment Republicans.

"We were not created by the genteel side of Republican politics," said Courser, a 42-year-old Lapeer attorney. "We were created from the rough and tumble work of gladiators."

Bill Ballenger, founder of the Lansing publication Inside Michigan Politics and a former Republican lawmaker, said he's not seen a coordinated group of newly elected legislators "bond together" like Gamrat, Courser and Glenn in his nearly half-century of observing state politics. Their outsized voice could draw other like-minded conservatives to their alliance, Ballenger said.

"They could become a critical mass, an ideological spear point in the Republican caucus in the House who could make not only a lot of noise, but a lot of difference, depending on how they do it," he said.

Courser gained notoriety in tea party ranks and scorn from the GOP establishment in 2013 when he nearly upset Michigan Republican Party Chairman Bobby Schostak in an election at the state convention.

Gamrat, a nurse from Plainwell, was spurred to organize the earliest tea party gatherings in 2009 when conservatives feared newly elected Democratic President Barack Obama would push the country toward European-style socialism. The 41-year-old mother of four didn't imagine her early tea party grassroots organizing would lead her to represent Allegan County in the state House.

"Back then, none of us knew where it was going to go," Gamrat said.

Glenn, 56, of Midland, has been around organized Republican politics longer than the other two. He unsuccessfully sought the Republican nomination for the U.S. Senate in 2012.

He is best known in conservative circles for spearheading the 2004 voter-approved ban on gay marriage as president of the American Family Association of Michigan. Glenn got his start in political activism at age 20 when he lobbied for a right-to-work law in New Mexico.

"I've got a lot of experience with the process from the outside being the person applying the pressure on legislators," Glenn said. "I am curious what the process will be like being on the other side."

Gamrat and Courser both plan to introduce anti-abortion bills this month that would stipulate in state law that life begins at the moment of conception. They both hope to pass laws that further limit the ability for women to terminate a pregnancy.

"A lot of people run saying they're pro-life and get the Right to Life endorsement, but if they're not willing to put these forward, then the conversation never happens," Gamrat said.

Courser said defining life at conception would be one more step toward ending the "tragedy" of abortion.

"If they found one cell on Mars or any other planet in the universe, they'd call it life," Courer said. "But here, if you have one cell, people refuse to call it human life."

Last week, Courser and Gamrat unveiled a "Contract for Liberty" pledge tied to their legislative agenda with libertarian-minded promises to restore the "freedom to own property" and "freedom to worship" as well as end "unjust taxation." They emailed the lengthy manifesto Friday to supporters and others involved in Michigan politics hours before tea party activists gathered for a "PowWow" at the Soaring Eagle Casino in Mount Pleasant.

State Rep. Jeff Irwin, a liberal Democrat from Ann Arbor, was among the unsolicited recipients of Courser and Gamrat's "Contract for Liberty" and said he read it.

"It was a lot of rhetoric and very little substance," Irwin said.

Courser, known for writing fiery emails attacking Republican Party leaders, said bills are being drafted to correspond with the "Contract for Liberty" agenda.

Glenn aligned himself with Courser and Gamrat late last year after all three survived hard-fought primaries in which the GOP establishment backed another candidate.

But Glenn did not sign onto Courser and Gamrat's "Contract for Liberty," and has recently shown signs of trying to distinguish himself from the pack by pursuing issues with more mainstream appeal.

His top legislative priority is to repeal Gov. Rick Snyder's 2011 tax on some pension income. Glenn also wants to make political candidates and campaigns subject to the "do not call" law to prevent them from sending electoral robocalls to telephone users who don't want them.

"Everyone will soon learn that we're each individuals and we each speak for ourselves," Glenn said Wednesday after taking his oath of office.

Other freshmen Republicans have resisted being lumped with Courser, Gamrat and Glenn.

"I'm wedded to my constituents and the folks (who) elected me," said new Rep. Lee Chatfield, R-Levering, who was aided by tea party activists in knocking off Rep. Frank Foster last year in a Republican primary. Foster's support of a ban on discrimination against gays and lesbians was used against him in northern Michigan's 107th District.

"That's the point when people should start taking their 'contract' seriously, when they have cogent ideas," Irwin said.

Cotter, the new speaker, has been reluctant to characterize the ideological bent of the new members of the 63-member Republican House caucus. He plans to assemble policy ideas from all Republican members and unveil a two-year agenda in early February.

"There's a very good chance it could be a more conservative caucus," Cotter said.

Last month, Courser attempted to inject himself into debate over road funding and gay rights when the last Legislature was debating those issues in December. He criticized then-Speaker Jase Bolger for going along with Snyder's agenda.

Courser said he won't stand for Cotter lurching further to the political middle after he voted to place a sales tax increase on the May ballot.

State of the State

Where: Chamber of Michigan House of Representatives at state Capitol in Lansing

What: Gov. Rick Snyder gives his first speech of the second term about the condition of Michigan and his agenda for the next four years. It is a joint session of the Michigan House and Senate.

Viewing: The Detroit News will live stream Snyder's speech. See it at detroitnews.com.