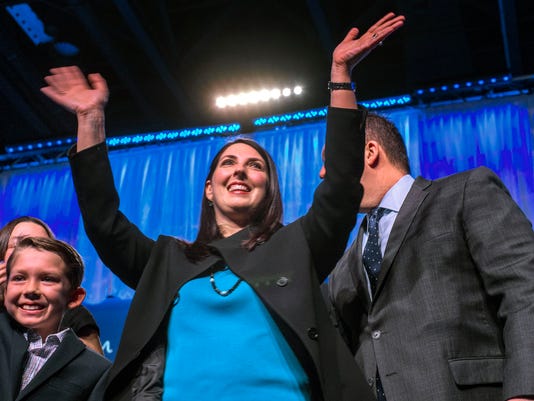 No love for sales tax proposal at convention

To fill time during vote counting at the Fifth District GOP caucus Friday night, Rep. Joseph Graves of Linden and Sen. David Robertson of Grand Blanc were invited to say a few words about what the Legislature has been doing.

Graves used his time to decry the Michigan Department of Transportation as “less than transparent” and make it clear he has no love for the May 5 ballot proposition that’ll ask voters to approve a state sales tax increase from 6 percent to 7 percent, raising an added $1.2 billion a year to fix crumbling roads and bridges.

Robertson then said he has “more sensitivity to your pocket” than lawmakers who voted in favor of the plan. He said he unsuccessfully sought “some form of tax reduction” as part of the complicated roads funding proposal it took lawmakers 24 hours to hammer out with Republican Gov. Rick Snyder.

“I have serious doubts, as many of you do, whether the proposal will pass,” Robertson added. Funding an alternative when it failed, he said, would present an opportunity “to use our opposition to tax increases as a discipline for state spending.”

Chief U.S. District Court Judge GeraldRosen’s political acumen has been credited by insiders in Detroit’s bankruptcy as a crucial component to Gov. Rick Snyder’s decision to get the Republican-controlled Legislature to commit $195 million toward the “grand bargain” settlement with city retirees.

The state’s contribution to Rosen’s “grand bargain” fund was crucial to pooling together $816 million over 20 years from taxpayers, private foundations and mostly corporate donors of the Detroit Institute of Arts to bolster Detroit’s pension funds.

As The Detroit News has reported, Snyder committed state funding to the grand bargain at the urging of Rosen. The judge and governor’s friendship dates back to Rosen’s 1982 failed bid for Congress as a Republican against U.S. Rep. Sander Levin, D-Royal Oak. Snyder volunteered on Rosen’s campaign.

On Wednesday, Rosen was honored for his work in the bankruptcy by Crain’s Detroit Business that centered on honoring the work of retired U.S. Bankruptcy Judge Steven Rhodes and former Detroit Emergency Manager Kevyn Orr.

The folks at Crain’s presented Rosen with a “Designated Hitter Award” for engineering the grand bargain to shield art at the DIA from a fire sale to satisfy creditors and use the “grand bargain” contributions to limit reductions to pension checks.

Baseball Hall of Famer Al Kaline taped a special message for Rosen from the Detroit Tigers’ spring training stadium in Lakeland, Florida, played at the luncheon.

“I couldn’t be with you in person, but I have to say that was some home run you hit for the city of Detroit,” Kaline told Rosen in the video. “... By saving the collection at the Detroit Institute of Arts and preserving more of the hard-earned benefits of the Detroit retirees, your grand bargain was a grand slam for Detroit. Well done, slugger.”