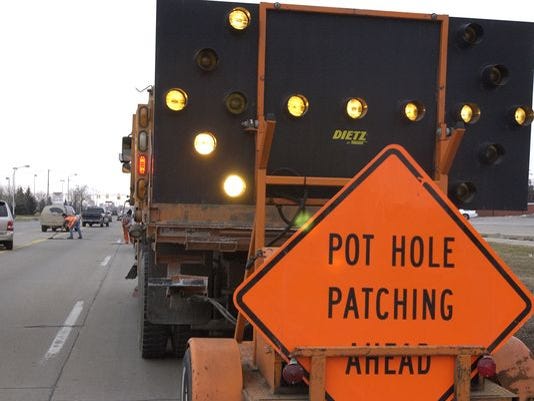 Lansing – — Supporters of Proposal 1 plan to launch a three-day, nine-city bus tour Thursday in a last-ditch effort to convince voters to approve a nearly 17 percent increase in the state sales tax rate.

With one week until the special statewide election next Tuesday, the Safe Roads Yes ballot campaign is deploying teams of volunteers to call voters and track down unreturned absentee ballots over the proposed constitutional amendment linked to boosting road funding $1.2 billion annually. The campaign wouldn't divulge who will be on the bus.

"I don't care what side you're on, everyone agrees Michigan's roads have gone from bad to worse, and they've got to get fixed," said Roger Martin, spokesman for the Safe Roads Yes campaign.

"It is the only solution before us."

Absentee voters have been targeted with mail, phone calls, digital advertising and some knocks on their doors by campaign volunteers and paid operatives, Martin said. Opponents, who have criticized the measure as a big tax hike filled with non-road spending, have fielded their own get-out-the-vote efforts.

The Safe Roads Yes campaign, which is largely being bankrolled by the road construction industry and business groups, is seeking voter support for increasing the sales tax from 6 percent to 7 percent as part of a complex road funding plan the Legislature crafted a week before Christmas.

"Right now, they've got $8 million and they've got to justify to their contributors that they're doing anything they can to make it win," said Ed Sarpolus, a pollster and political consultant not working on the ballot initiative.

The bus tour will run Thursday, Friday and Monday, and Gov. Rick Snyder "will definitely be joining most, if not all, of the tour," spokeswoman Sara Wurfel said Monday.

Proponents have raised $8.1 million for the Safe Roads Yes campaign, with about $5.2 million coming from the Michigan Infrastructure & Transportation Association, the lobbying arm of the road-building industry.

The leading opposition group is countering with its eighth consecutive week of telephone town hall meetings with voters; one conference call scheduled for Tuesday night will be directed at 50,000 households, said Randall Thompson, executive director of the Coalition Against Higher Taxes and Special Interest Deals.

"People underestimate the impact those things have," Thompson said.

Saginaw County millionaire Paul Mitchell has spent about $161,000 of his own money through the Coalition Against Higher Taxes and Special Interest Deals' campaign against Proposal 1. And opponents have amassed a little less than $195,000 combined to spend against the ballot measure through Monday.

"It's important that we get voters to the polls to make a decision on the largest tax increase in 50 years," Mitchell told The Detroit News.

As Election Day has neared, the Safe Roads Yes campaign has narrowed its focus to traditional absentee voters 60 and older in heavily populated pockets of southeast Michigan.

"They're the ones who are going to be most important here, the ones that cast the most votes," Martin said.

The Safe Roads Yes campaign is banking on a low turnout of 900,000 to 1 million voters to win approval of Proposal 1.

But voter data expert Mark Grebner estimates turnout could exceed 1.5 million, based on 550,000 absentee ballots that have been requested by voters.

Nearly 61 percent of the 468,852 absentee ballots sent had been returned to local clerks as of Wednesday, according to the most recent data available from the Secretary of State's Office.

Voter participation would be less than 21 percent if 1.5 million ballots are cast absentee or in person May 5. About 7.27 million residents are registered to vote in the election, said Fred Woodhams, spokesman for the Secretary of State's Office.

"It's always important, especially in lower-turnout elections, because those people vote and most people don't," said Grebner of Practical Political Consulting in East Lansing.

If approved by voters, Proposal 1 would trigger the repeal of the sales tax on gasoline, increase the gas tax by as much as 10 cents per gallon (based on today's prices), slap truckers with new fees and eliminate depreciation discounts on registration taxes for new vehicles.

When fully implemented, the proposal would generate $1.9 billion in new revenue for the state by the 2017-18 fiscal year, with $1.2 billion dedicated to roads and bridges and $116 million for public transportation, according to the non-partisan House Fiscal Agency.

About $200 million would go to public education, $111 million to local governments in additional revenue-sharing payments and about $260 million toward a tax credit for low-income working families to offset the cost of the sales tax increase.

Snyder and Proposal 1 supporters have focused their message to voters primarily on the safety of Michigan's roads.

None of the advertising has been geared toward telling voters about how Proposal 1 provides more money for schools, cities, townships, villages, public transit or a tax break for the poor.

"They said we're going to put schools in the background because we don't want to alienate Republicans, and then they alienated Democrats," said Howard Edelson, a Democratic political consultant who briefly worked on the campaign before parting ways with Snyder's office.

"They never really explained the context of the problem or how we got here," Edelson said. "They went right into this is being about public safety, and there was no context for it. That was one of the big blunders."

Frank Ferro, 56, of Lansing said he intends to vote "yes" with an absentee ballot.

"I'm going to hold my nose while doing it," said Ferro, an international trade manager at the Michigan Economic Development Corp.

"I'm really angry at the Legislature for putting us in the position of having to vote for it. They really shirked their duties. The roads are terrible."

He said he knows first-hand the condition of Michigan's roads, splitting his time between Frankfort and Royal Oak and working in Lansing.

"We are just underfunding infrastructure and all sorts of things in Michigan right now because of the huge anti-tax push that seems to attract voters."

Registered voters can apply for an absentee ballot through their local city or township clerk if they are:

■Unable to vote without assistance at the polls.

■Are in jail awaiting arraignment or trial.

■Unable to go to the polls on Election Day for religious reasons.

■Working as an election inspector outside their precinct of residence.

Voters can search for their local clerk's contact information online at www.Michigan.gov/vote.

Requests for getting an absent voter ballot mailed must be received by a voter's clerk no later than 2 p.m. the Saturday before the election. Absentee ballots can be obtained in person through 4 p.m. Monday at local clerk's offices.

Ballots must be returned to the local clerk by 8 p.m. on Election Day.