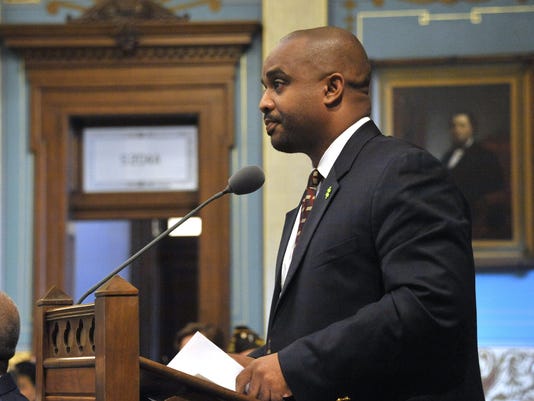 Lansing — As state Sen. Bert Johnson and his attorney worked Thursday to resolve a bench warrant issued for his arrest in Cook County, Illinois, over an unpaid political fundraising bill, other financial problems for the Highland Park Democrat came to light.

On Tuesday, Johnson paid off a court-ordered $7,446 campaign office rental bill from 2010 after a nearly five-year legal battle by the landlord to get paid, said Ryan Fishman, a Southfield debt-collection attorney.

In addition, state records show Johnson is behind on filing campaign finance reports and owes $5,950 in late fees. Johnson is listed as the treasurer and record keeper of his own campaign committee.

He has not yet filed a post-election report that was due Dec. 4, according to the Bureau of Elections.

The other issue started in 2010, when Progressive Poletown Properties evicted Johnson's campaign from a Hamtramck office space for not paying its rent and won a judgment in January 2011, just as Johnson was taking his seat in the state Senate. But Fishman Group P.C. was unable to collect on the debt because Johnson owed child support in Wayne and Oakland counties, Fishman said.

After questions were raised with Johnson about the bad check and past debt, the senator showed up Monday at Fishman's office in Southfield with a $4,000 cashier's check, Fishman said. On Tuesday, Johnson paid off the remaining $3,446, he said.

"I think we learned this week that no one is above the law," said Fishman, who unsuccessfully ran for the state Senate last year as a Democrat in Oakland County's 13th District.

Cook County Circuit Court Judge Alexander P. White issued a contempt of court order against Johnson after failing to appear in court Wednesday for a hearing his attorney said they were unaware of.

The Detroit News first reported on the bench warrant for Johnson's arrest Wednesday evening after obtaining a copy of the order.

Chicago-based Paladin Political Group has been trying to collect on a $21,983.37 judgment against Johnson for political fundraising work in 2013 when Johnson was weighing whether to run for Congress or seek re-election to the 2nd Senate District seat in Wayne County.

"We've been in communication with the plaintiffs lawyers, and we're trying to make our best efforts to resolve it," Amir Makled, a Dearborn attorney representing Johnson, said Thursday.

Johnson was not planning to immediately travel to Chicago to resolve the contempt of court order, Makled said.

Johnson was late to the Senate session Thursday and left the chamber before reporters could ask him questions about the bench warrant, which has a $25,000 bond requirement if the second-term senator is arrested.

Christopher Hales, an attorney for Chicago-based Paladin Political Group, sought the contempt order after Johnson failed to submit documentation about his ability to pay the $21,983.37 judgment.

Johnson's attorney said the contempt order was improper and that the Paladin Political Group should be pursuing payment through a Michigan court.

In mid-December, a Cook County jury awarded Paladin Political Group the $21,983.37 sum for expenses related to its fund-raising activities on Johnson's behalf after a two-day trial, Hales said.

Paladin Political Group owner Dave Seman told The News he had an employee based in Detroit for most of 2013, trying to help Johnson raise money for his 2014 state Senate re-election campaign or a second bid for Congress in the 14th Congressional District.

The jury found that Johnson did not breach his contract, but that Paladin Political Group was entitled to be paid its expenses, Makled said.

Johnson easily won re-election last year in the the 2nd Senate District, which stretches from southwest Detroit through the city's east side and includes Highland Park, Hamtramck, Harper Woods and the Pointes.