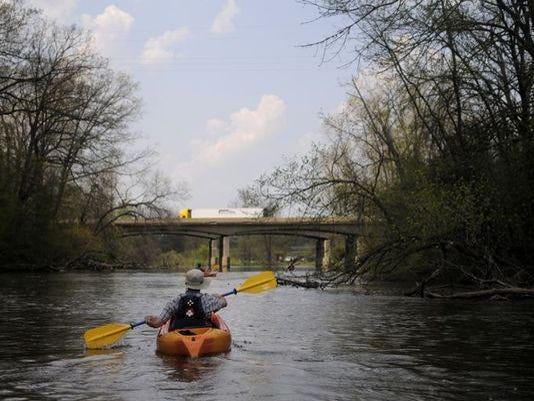 A kayaker makes his way on the Kalamazoo River under I-94. The settlement package — which ends any further legal action against Enbridge for the 2010 spill — includes $40 million in already-completed projects and $35 million in work yet to be done.(Photo: Elizabeth Conley / The Detroit News)Buy Photo

Lansing — Lawmakers asked state environmental officials Thursday morning what lessons they had learned about preventing another oil spill like the 2010 incident in the Kalamazoo River that led to a recent $75 million settlement with Canada’s Enbridge Energy.

In late July 2010, one of the company’s underground pipelines near Marshall ruptured, spilling 840,000 gallons of heavy crude oil that eventually contaminated more than 30 miles of the river. It amounted to the largest inland oil disaster in U.S. history.

During Thursday’s hearings, members of the Republican-dominated House Appropriations Committee’s Environmental Quality Subcommittee seemed pleased with the deal but wondered what has changed that will prevent a recurrence.

“I’m not defending Enbridge, but I think they have made significant changes to their operations,” said Dan Wyant, director of the Michigan Department of Environmental Quality. “All indications are that ... (the company’s emergency response) plans have been adjusted and they have been the basis for (additional) training.”

“We don’t want to have another settlement, and we’re already dealing with an aging pipeline under the Straits of Mackinac,” she said, referring to Enbridge’s Line 5. “And I’m concerned that we’re not doing enough.”

While the state of Michigan has a say in the approval of pipelines that carry natural gas, regulation of oil lines is overseen by the federal government.

Roberts also questioned how the state could possibly take on more of that responsibility to wield more control over companies like Enbridge.

“We’re very much willing to talk about what more should be done so that we don’t have (another) incident like we had in the Kalamazoo River,” he said.

Environmental groups have voiced concerns over Line 5 in the five years since Enbridge’s Kalamazoo River spill. A line rupture under the straits could conceivable carry oil a long way through the Great Lakes.

The severity of the state’s settlement agreement, filed in Calhoun County Circuit Court on May 12, has been questioned by some conservation groups that point to its lack of a major financial penalty.

The package — which ends any further legal action against Enbridge for the 2010 spill — includes $40 million in already-completed projects and $35 million in work yet to be done:

■$18 million for removal of the Ceresco Dam (completed in 2014) and restoration work on the surrounding mile of the Kalamazoo River.

■$10 million for five already-created recreational access sites along the river.

■$5 million for stream restoration throughout the watershed.

■$12 million in reimbursement to the state, as well as assurances Enbridge will pay future oversight costs.

A condition of the agreement ensures all of the money will be earmarked for restoration and improvement of the affected watershed. The money cannot be diverted to unrelated areas of the state budget.

Nicole Zacharda, an enforcement specialist with DEQ’s Water Resources Division, said the main outstanding portion of the settlement is the wetland compensation package.

“That plan has not yet been formulated,” Zacharda said. “That piece is supposed to be submitted to us from Enbridge within eight months.”